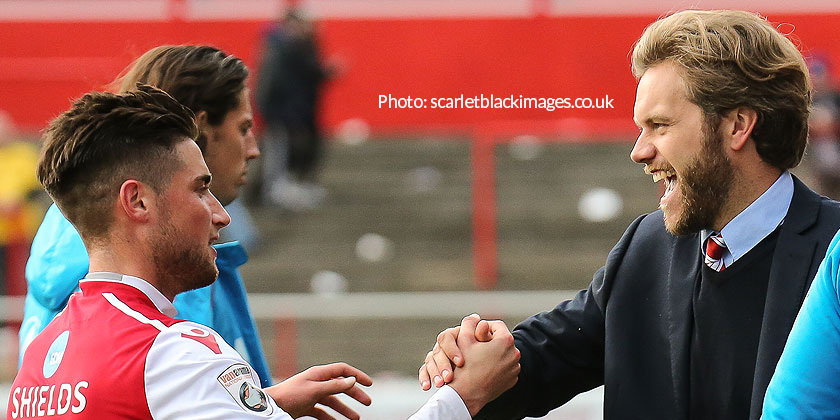 Fleet take the Silk Road to the summit

Top spot in this season’s National League hasn’t been somewhere any club has rested for long and the latest incumbents, Macclesfield Town, are Fleet’s next challenge on the road.

The Silkmen took over from Dover in midweek following a late 2-1 win over Guiseley which came hot on the heels of victories over Aldershot and Torquay. Like the Fleet, Macclesfield have won three matches in succession… but they have also lost three more than Daryl McMahon’s men, leaving this clash at Moss Rose finely balanced.

Given the fluidity of the league, McMahon isn’t particularly bothered about who’s top of the table at the moment. “I don’t really care where we are in the table at the minute. The league probably hasn’t settled down yet.

“Macclesfield have gone top, so everything’s all over the place,” McMahon said. “We’ve got to keep on playing and performing and hopefully the results keep on coming. It’s important we’re ready to perform. We’ve got great togetherness in the group and that allows, when missing key players, someone else to step up to the plate. And we’ve got plenty of people like that.”

Those who have stepped into the breach lately may have to do so again with the knocks sustained by Andy Drury and Darren McQueen against Halifax taking slightly longer to clear up than first anticipated. But with Fleet starting to find goals throughout the squad once more, as they did last season, that can only be good news for McMahon. With Myles Weston and Danny Mills opening their accounts for the season at Solihull, that’s nine different players who have now registered on the scoresheet for 2017/18.

Macclesfield have the same number of goalscorers in their squad, with former Weston-super-Mare frontman Scott Wilson leading the way with four, while ex-Fleet striker Tyrone Marsh is another who has registered a goal in this campaign. Summer signing from Chester Elliott Durrell is another danger from midfield.

Being top of the pile is arguably something of a surprise for Macc fans who, having lost a number of the side that made it to last season’s FA Trophy Final, survived a summer of discontent. With only one win from their first five games, it seemed John Askey’s team might struggle but they have since found their feet and have only lost one of their last six, that being a 4-1 home reverse at the hands of Maidstone United. With wins against the likes of Wrexham, Dover and Aldershot, it’s a squad that has shown an ability to topple some form sides.

However, with Fleet’s unbeaten away record in the league stretching back to Boxing Day and Macclesfield having lost two home games to the tune of 3-1 and 4-1, McMahon’s men will go to Moss Rose with little fear.

Town manager Askey told the Macclesfield Express: “If you look at the bench – we might not have a huge squad, but it’s full of quality – we’ve got very good players who are fit who can’t make the squad at the moment. The lads in the team know that they have to perform to stay in the team, and there’s competition for places.”

French forward Gime Toure has been out with an ankle injury while Macclesfield have just signed 6ft 5in former Tranmere and Galway United goalkeeper Sam Ramsbottom but he’ll be unlikely to displace veteran Shwan Jalal in the short term.

This will be only the fourth meeting between the clubs, following 1989’s FA Trophy defeat at Moss Rose and our unexpected 2-1 win there in our relegation season of 2012/13. Town gained their revenge with a 4-0 win in the last televised match at Stonebridge Road in February 2013 (see below).

Ed Miller has been Ebbsfleet United's communications manager and programme editor since 2014 and responsible for the club website since 2007. Contact him on ed.miller@eufc.co.uk
PrevPreviousMills pays tribute to fans’ midweek venture
NextMacclesfield Town 1-0 FleetNext