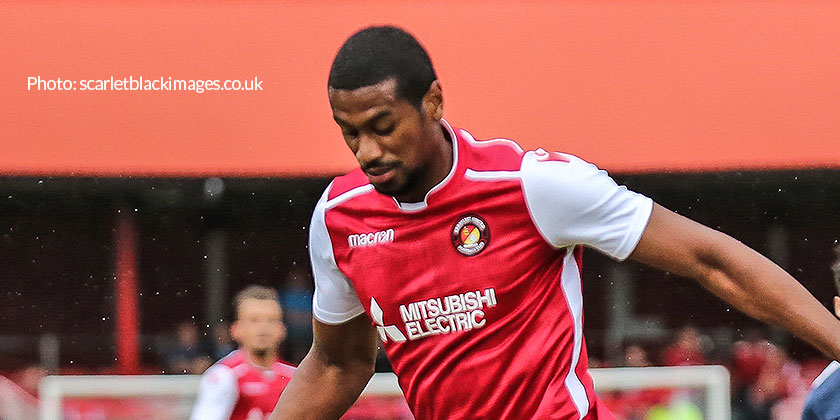 Danny Mills praised Fleet fans for their midweek trip up the M1 and he was delighted to reward them with his first goal for the club – and the strike which made sure the points returned to Kent.

“Look at the fans that travelled all the way up to the Midlands on a Tuesday night,” he told BBC Radio Kent’s Charles Webster. “It’s unbelievable and hopefully we can keep going on the up. A hundred per cent, there was no other place I was going to go [when signing in the summer]. It suited me down to a T, a young manager that’s been given a long-term deal, stability at the football club, a great owner, great players and great fans.”

Mills’ first goal for the Fleet arrived in the 83rd minute after he took on a header from Anthony Cook and showed skill and composure to fire beyond goalkeeper Nathan Vaughan. And the striker revealed he had worked on just such a scenario in training. “In training when we do the extras, me and David Jupp do drills exactly like that, when the ball comes like that, shift and shoot. And that was in my mind a little bit. I was thinking, what do you normally do at training, calm down, have a little bit of composure. But the main thing is the three points and I’m just happy I was able to contribute. On a personal level, it’s a great feeling and what summed it up for me was how happy all the boys were for me.”

His manager was also delighted for him and Mills is pleased his hard training regime is paying off. “The gaffer sees how hard I’ve been working,” he said, “not only on finishing but just on fitness in general, just trying to make sure I’m up to speed and he was happy to have seen that I put into practice what I’ve been working so hard on every single day. I’ve just got into my head that I keep working hard. There’s 46 league games plus cup games and I’m just taking each as it comes. It’s a new level for me with a new club.

“I came on in a game where we were under pressure and I think we needed to get the third goal to sort of kill the game. The boys played really well today, especially in the first half I thought we were outstanding to get the two goals. We probably could have had more to be honest. The second half I think we started off a little bit slow and they got the goal and their tails were up.

Mills may not have had all the minutes this season that he had been used to at Whitehawk, but he’s putting in hours in extra training. “You only see what happens on a Saturday but we’re together day to day, all of us, and there’s such a togetherness,” he said. “Since the day I walked through the door, I’ve tried to work really hard. I didn’t come to the club expecting to walk straight into the team, I knew I was going to have to work really hard.

“Every day in training, especially when I haven’t been playing as much, I always try to do extras with Juppy, working on finishing and doing a little bit extra in the gym. You work so hard and you just hope, especially as a striker, for that one moment of magic that you can try and create and luckily today it happened and it sent us on our way.

“Everyone’s so close. We’re together five days a week, we spend three, four hours a day with each other and when you have the away trips, you spend even longer. The togetherness is something I’ve never seen before at a football club. It’s unbelievable, everyone gets on and there’s no egos.

“That sums it up, how happy everyone was that I scored. When the next player scores, I’ll be as happy as I was when I scored.”

Ed Miller has been Ebbsfleet United's communications manager and programme editor since 2014 and responsible for the club website since 2007. Contact him on ed.miller@eufc.co.uk
PrevPreviousIt’s us being us again, says Fleet boss
NextFleet take the Silk Road to the summitNext