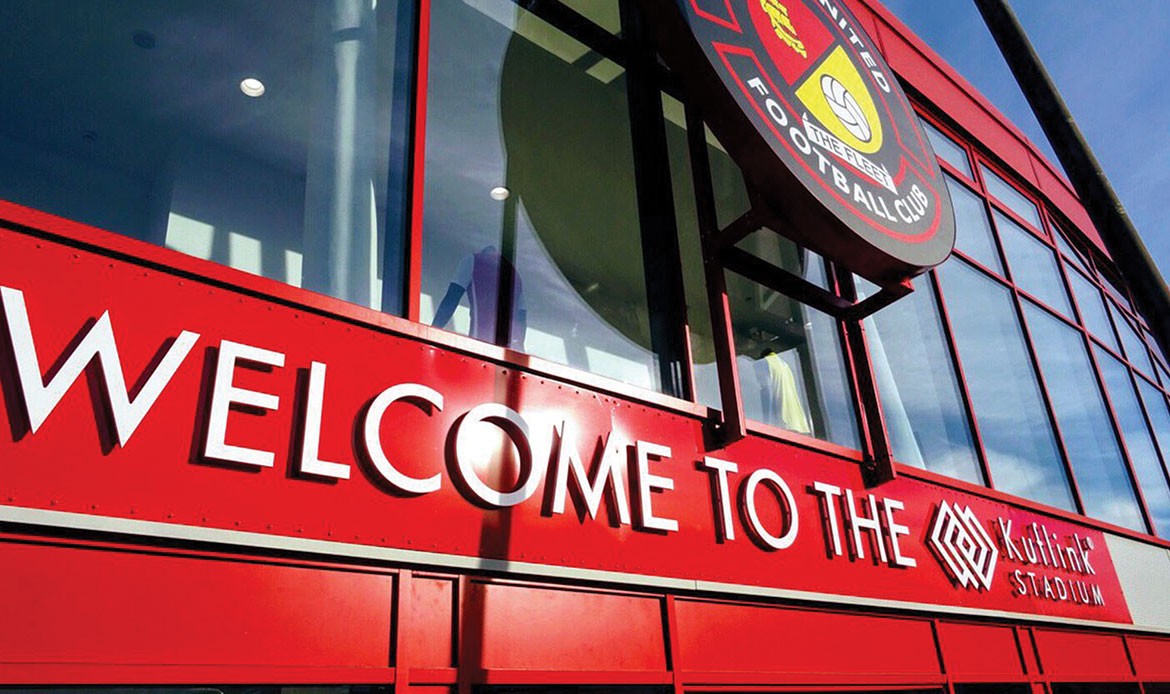 ARRIVING BY ROAD
i. From the motorway
Exit the M25 at Junction 2 and take the A2 signposted Canterbury. Leave the A2 at the Northfleet/Gravesend West junction. At roundabout, follow signs to Ebbsfleet International Station/A226 which will take you on to Thamesway and past Ebbsfleet International. The stadium is at the end of the road. For car parking see below or contact the club if you have specific parking needs (for example, disabled parking).

ii. From Gravesend town centre
Follow the one-way system round to the railway station, turning right at the top of the road by the traffic lights. At the next junction, take left turn on to New Road/Overcliffe. Continue straight for about two miles to London Road, then The Hill, then Northfleet High Street and finally past The Hive down to Stonebridge Road. The ground is at the bottom of the hill by the roundabout.

ARRIVING BY PUBLIC TRANSPORT
The nearest stations are Northfleet (take Gravesend service from Charing Cross, Waterloo East and London Bridge) and Ebbsfleet International. From Northfleet, go (more or less) straight ahead until you reach the main road. Turn left, walk to the bottom of the hill and the ground is on your right.

The high-speed rail service from London St Pancras to Ebbsfleet International (15-18 minutes journey time) will also take you to within walking distance of the ground. Proceed through Car Park C and out on to the roundabout where you will see the stadium in front of you.

If you are staying in Gravesend, you can get a bus to the ground from Gravesend station. Come out of the station on the Town side and turn right. There are bus stops just by the station – the 480/490 service will drop you outside the ground. Alternatively take the FASTRACK “B” Service, which also serves Ebbsfleet International.

There is limited space down side streets and Thamesway (between the station and the roundabout outside the stadium) is designated a ‘Clearway’ and any cars parked along there are liable to be ticketed. There is also limited space available in surrounding residential streets.

We would encourage all spectators to use Ebbsfleet International Station which offers secure matchday parking in its Car Park C for £3. It is just over five minutes walk from the ground and is the best bet for a parking space in the area. The club strongly advises use of this car park to avoid problems of vandalism or cars being ticketed. Please aid the gate staff by having small change to hand. High-value notes cannot be changed on the premises.

We have bike racks inside the stadium for those of you wishing to lock up bicycles.

The following items must not be brought to the Kuflink Stadium: weapons, narcotics, fireworks/flares and smoke bombs are all banned. Stewards reserve the right to perform bag searches for security reasons.

If you have any questions or requirements ahead of your visit, please call 01474 533796 or email info@eufc.co.uk.

1. The Club reserves the right of admission to the Ground. Admission will not be granted to a person who is subject of a Domestic/International Banning Order or Club Ban.

2. All matches will be played in accordance with the rules of the Football Association, the National League and the laws of the game and with such rules and regulations as the Club may make from time to time.

3. The game/event cannot be guaranteed to take place on the particular day or at the particular time advertised and the Club reserves the right to change its advertised fixtures without prior notice and without liability.

4. No refund of any cash admission charge paid at the turnstile will be made.

5. In the event of a match being abandoned before half time a voucher for the rearranged match will be issued on the production of a ticket stub.

6. Should the match be abandoned after half time there will be no vouchers issued or refunds made. All attendees must pay again when the match is rearranged.

7. All persons entering the ground must pay for admission and/or hold a valid match ticket. Persons issued with an admission ticket must retain the stub and tickets issued for a specific seat must be retained and the person must occupy that seat, unless instructed otherwise by a steward or servant/agent of the Club.

8. All young children must be supervised at all times by their parents or guardian.

9. The Club reserves the right to refuse admission to, or eject from the ground, any person who refuses to be searched by any steward, servant or agent of the Club or by any police officer.

10. Fireworks, flares, smoke canisters, laser devices, air horns, knives, bottles, glass vessels, flags, banners, poles and other similar articles or containers, which might be used as a weapon, are not permitted in the ground unless authorised by the Safety Officer.

11. Flags/banners must not interfere with the viewing of spectators. The flags and banners must also not be allowed to obstruct advertising boards or directional signs.

12. The throwing of any object within the ground is strictly forbidden.

13. The use of foul and abusive language, threatening behaviour, obscene chanting, or racist/homophobic abuse towards any person is strictly forbidden.

14. Smoking of tobacco is only allowed in designated parts of the ground. This includes e-cigarettes.

15. No re-admittance to events will be permitted for individuals wishing to leave in order to smoke outside the ground.

16. Re-admittance may be granted in certain incidences and at the discretion of a steward, authorised agent of the Club or a police officer.

17. Unauthorised persons are strictly forbidden from entering upon the field of play or the surrounding area unless advised to do so in an emergency or by the Safety Officer.

18. In the event of a crowd segregated game, the moving from one enclosed area of the ground to another without the permission of a steward, police officer or other authorised agent of the Club is strictly forbidden.

19. The obstruction of gangways, access ways, exits and entrances, stairways and like places and the standing in seated areas whilst play is in progress is strictly forbidden. The standing in yellow chevroned areas is also forbidden. Any person who persistently contravenes this regulation will be asked to leave the ground.

20. The climbing of floodlight pylons or any other structure within the ground is strictly forbidden.

21. Unnecessary noise such as that from the use of radio sets/speakers, personal stereos/mobile phones, loud hailers and behaviour likely to cause confusion or annoyance to any person is not permitted in any part of the ground.

23. The consumption of alcohol is permitted only in places authorised in accordance with the local licensing authority and The Sporting Events (Control of Alcohol etc.) Act 1985.

24. Any person attempting to enter the ground or being inside the ground whilst drunk will be ejected and may be arrested.

25. Any person being found in possession of any intoxicating liquor, or bottle, can, or other portable container used for holding such liquor, when entering the ground will result in the person being asked to leave the ground.

26. No glass bottles or glasses are allowed outside of any of the bar/hospitality areas.

27. Any person attempting to gain admission to, or being found within a section of the ground designated for “Players, Management, Officials, Vice President’s, Directors or Red Zone” without the appropriate authorisation, may be ejected from the ground

28. Only persons specifically authorised in advance by the Club are permitted to distribute either without charge or offer for sale within the ground any programmes, magazines, any other literature or items such as scarfs, badges etc.

29. Anybody found damaging or defacing the property of the Club will be prosecuted.

30. Any persons who use insulting or improper conduct towards match officials will be removed from the ground.

31. No animals, other than assistance dogs, shall be allowed entry into the ground.

32. No standing is allowed in areas marked with yellow chevrons.

33. Persons failing to comply with instructions from a steward, police officer or other authorised agent of the Club will be ejected from the ground.

34. The Club reserves the right for its servants, agents and police officers to remove from the ground any person who does not comply with these ground regulations, the rules and regulations of the Football Association and the National Football League or whose presence within the ground is, or could reasonably be construed as, constituting a source of danger, nuisance or annoyance to any other person.

35. CCTV cameras are in use in and around the Ground and the Club may itself use or pass to the police or any Football Authority or other clubs, any recordings for use in any proceedings in accordance with GDPR legislation.