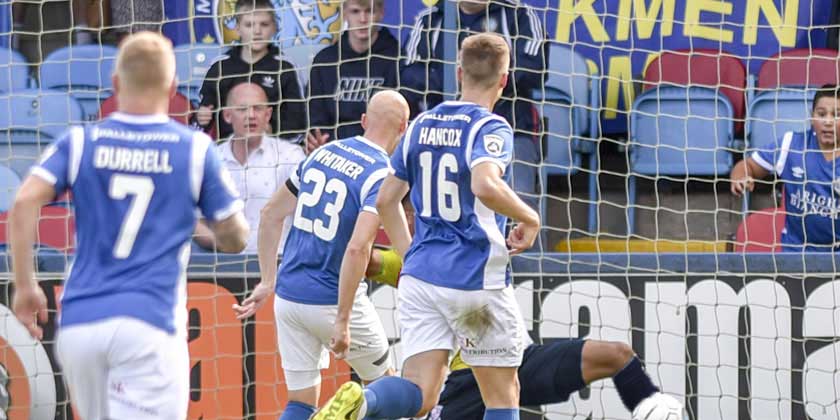 It was a milestone that probably deserved to be witnessed by someone of Sir Alex Ferguson’s stature and the former Manchester United manager was in attendance to see Fleet’s first away league defeat since Boxing Day last year.

In turn, Macclesfield Town became the first National League side this season to win four straight matches, though Fleet made it difficult for them and probably deserved to take a point from Moss Rose.

There was only one change for Daryl McMahon’s side and it was forced on him after Danny Kedwell answered the call of a newborn, meaning Danny Mills got the nod in his place after opening his Fleet account on Tuesday night. In increasingly wet weather, the game got off at a fairly slow tempo and burst into life only in fits and starts after that. The visitors, captained by Dean Rance, were comfortable enough in the early stages as they kept a tight shape against a Macclesfield side who were looking to make an energetic, quick start down the wings but were hampered by the Fleet’s setup.

It was the yellow shirts of the Fleet who had the first decent opportunity on six minutes when a ball into Danny Mills saw him peel off a defender and get a shot on target from close range but goalkeeper Shwan Jalal was able to palm it round the post.

The league leaders enjoyed plenty of possession but couldn’t find much room to get in behind the Fleet line and when they did, found the defence sharp in the tackle. Jack Connors denied Macclesfield’s form player Elliott Durrell when he was set free down the flank by Jared Hodgkiss while Chris Bush made a number of decent interceptions as Macclesfield tried to give Nathan Ashmore something to think about.

Sean Shields was able to torment the Macclesfield full backs when he was supplied and he got a couple of crosses in while his 23rd minute effort drew another save from Jalal. Mills, meanwhile, was looking a threat running in behind but both sets of strikers weren’t quite getting the delivery they needed. At the other end, the impressive Danny Whitaker and George Pilkington sent shots just wide. The Silkmen’s best chance up to that point came just after the half-hour when a corner was whipped into the box and landed kindly for Whitaker on the edge but he leaned back and planted it over the bar.

Back came the Fleet and Shields was able to jink his way into a shooting position as he flummoxed the Macclesfield defence but again Jalal made a decent save from the resulting shot.

With the rain falling ever heavier, it was difficult for either side to keep their passes from skimming off a slick surface and Fleet seemed to have done enough to frustrate Macclesfield’s attempts until three minutes before half-time. What was to be the winning goal came down the home side’s right flank with Whitaker opening up the space to find Wilson. He was rather fortuitous in seeing his pass get to Mitch Hancox who was lurking to gratefully accept the chance to fire the ball home.

That briefly gave Macclesfield the impetus to wrap things up before half-time but Bush got a head to a ball into the box and then Ashmore made the save from Whitaker’s follow-up. There was still time for Fleet to almost fashion an equaliser when Mills seemed set to pounce on a pass inside the box but just as he was about to let fly, Keith Lowe slipped in with a superbly timed tackle to divert the ball to safety.

Fleet were slow to get going in the second half, though Anthony Cook was straight into action after he replaced Luke Coulson. There was another enforced change on 58 minutes when an injury to Connors meant he was withdrawn and Aaron McLean replaced him. It saw Fleet go to three at the back, with McLean going through the middle up front, supported by Myles Weston and Mills alongside him.

That heralded a slightly more attacking threat from the visitors that increased as time ticked by. Shields forced Macclesfield into a defensive error and Jalal saved them with a stop that went out for a corner before McLean was fouled just outside the box and Jack Powell sent the free-kick over the bar.

The visitors kept coming forward and forced two more corners as the league leaders began to look a little nervous heading towards the final 15 minutes. McLean looked to play in Mills inside the box but the former Whitehawk man was just inches short of connecting and Pilkington nipped in to clear. Fleet had to be careful of being caught on the counter, however, as gaps began to open in midfield and former Jamie Day signing Tyrone Marsh was stopped in his tracks by Kenny Clark before David Fitzpatrick fired just over the crossbar.

Whitehead had two later efforts for the home side as they were able to wind the clock down and in four minutes of time added on, Fleet were unable to test Jalal again. Though ultimately a fruitless trip for the Fleet, the gap to the play-offs remains just two points and McMahon will take heart that his side were by no means second best to the league’s in-form side and current pacesetters.