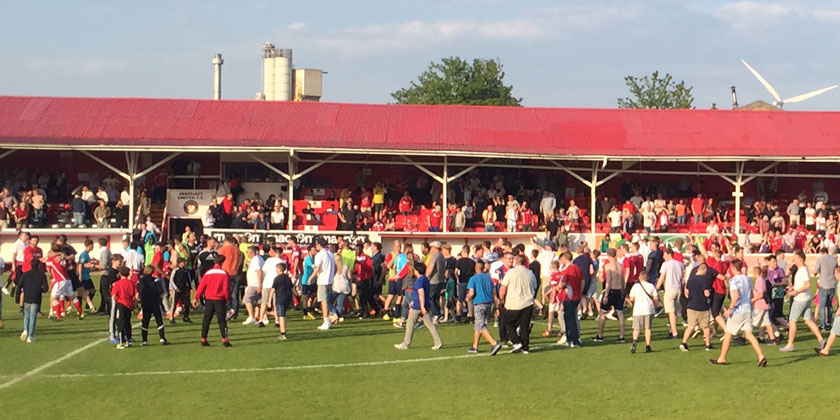 Nathan Ashmore saved the crucial spot kick from Jake Robinson in a penalty shootout to send Fleet into the National League South promotion final after they were pushed all the way by Whitehawk. It wasn’t quite the easy path to the final of previous play-off campaigns for nervous home fans who had to withstand a Whitehawk rally in the second-half and then the anxiety of extra-time before the lottery of penalties loomed large.

On a sweltering hot day at Stonebridge Road, it wasn’t a place for the faint-hearted and there weren’t many cool heads left by the end of the 120+ minutes of action, but Fleet nonetheless booked their second promotion final in three seasons, setting up an all-Kent affair against Maidstone United next Saturday.

Daryl McMahon named an unchanged side from the one that beat Whitehawk on Wednesday, while the visitors brought in former Fleet defender Chris Sessegnon in place of Liam Graham. Fleet really needed to keep it tight early on, or better still score quickly themselves, but Whitehawk got off to a dream start.

They almost scored straight from the kick-off when a freak ricochet sent the ball ballooning over Nathan Ashmore to rest on top of the net. But the Fleet goal was breached just five minutes later. Dave Martin advanced down the left flank and sent a searching cross to the far post where Nick Arnold was in space but he still had plenty to do and arrowed a volley away from Ashmore and into the opposite corner to haul the tie level on aggregate.

Fleet claimed a penalty when Matt Godden was pulled back by Sessegnon in the box but instead Whitehawk broke and Martin again got his cross in only for Kenny Clark to snuff out the danger.

The home side began to ask a few questions after that and had the ball in the net on 21 minutes but that was ruled out by a flag. Anthony Cook then got sight of goal from 12 yards and curled a shot in that Godden tried to divert past the goalkeeper but instead saw his effort knocked behind for a corner.

From that set piece on 23 minutes, Fleet got their noses in front on aggregate as Sam Deering floated it to where Clark was poised and he made it 1-1 on the day, 2-1 overall. Godden was only inches away from converting another header moments later, his close-range effort just about pushed clear by goalkeeper Craig Ross.

It was Fleet’s best spell of the match but they couldn’t find another goal and thereafter the first-half descended into something of a niggly affair with plenty for the referee to do to calm tempers. Two Hawks players saw yellow but the visitors ended the half well, Clark just about recovering to thwart Martin while the same player headed a decent chance goalwards which Ashmore did very well to divert behind the post.

Home fans were happy enough to lead on aggregate after a first-half that was far from pretty but their side were unable to build from that platform in the second half. And, as in the first-half, the Hawks gave themselves a lifeline early on. It came six minutes in, Martin again the tormentor, managing to upset Pooley’s balance on the left before crossing to where Mills was hanging in the air just long enough to send a powerful header beyond Ashmore.

Thereafter the game became disjointed, attention focused as much on the shenanigans behind the away goal as on what was happening on the pitch and that seemed to affect the game for a short while. Kedwell should probably have done better when Deering laid a neat ball into his path and the shot went way over the bar but the Fleet No.9 then did manage to get the ball in the net, sending a header looping over Ross but the goal was disallowed for reasons that weren’t immediately obvious.

Godden then almost set Kedwell free from Joe Howe’s delivery but that ran long before Whitehawk ramped up the possession for the final quarter of the game. Pooley was withdrawn as Fleet went three at the back, the wingers lying deep to cover the flanks. But it didn’t stem the flow with Martin in particular ever dangerous from out wide. Jordan Rose headed a cross over and Robinson was inches wide from a decent Sam Rents delivery as the Hawks looked the more likely winners in the 90 minutes.

Fleet had a few late chances of their own, Godden trying to lob Ross and then Kedwell brilliantly releasing his strike partner whose first-time shot earned a corner. But the Hawks came back and when Torres crashed a shot from distance that quite literally rattled the upright, Fleet fans were as shook up as the goal frame. Clark then had to be alert to rob the ball from Robinson who leapt at another cross before the final whistle signalled extra time.

Fleet changed things round again, Tom Bonner and Charlie Sheringham coming on, the former in an unfamiliar left-back position. But extra-time was something of a non-event, and the first period was devoid entirely of chances. Mills almost broke the deadlock early in the second period sending yet another Hawks corner just past the post. But that was his last contribution and he limped off, Fleet looking much more comfortable without the big man to keep an eye on.

Fleet had a final chance, Kedwell almost through and he attempted to slide the ball past Ross only for the keeper to clear, Godden firing the resulting opportunity over the bar and with it any suggestion this game might be decided in open play,

So penalties it was and as they kicked towards the noisy Fleet fans in the Plough End, the Hawks got off the mark through Dave Martin. But Fleet converted their next two through Jordan Parkes and Charlie Sheringham while Hawks missed their two, Liam Graham’s kick hitting the post and rolling across the line, while Sam Rents saw his effort saved by Ashmore. Whitehawk saw daylight when Nick Arnold converted and Stuart Lewis’ penalty was saved but it was Ashmore to emerge the hero when he got in the way of Jake Robinson’s vital kick and Fleet were through to the 2015/16 Promotion Final.

Ed Miller has been Ebbsfleet United's communications manager and programme editor since 2014 and responsible for the club website since 2007. Contact him on ed.miller@eufc.co.uk
PrevPreviousMacca galvanises players and fans
NextMacca hails “big presence” AshmoreNext