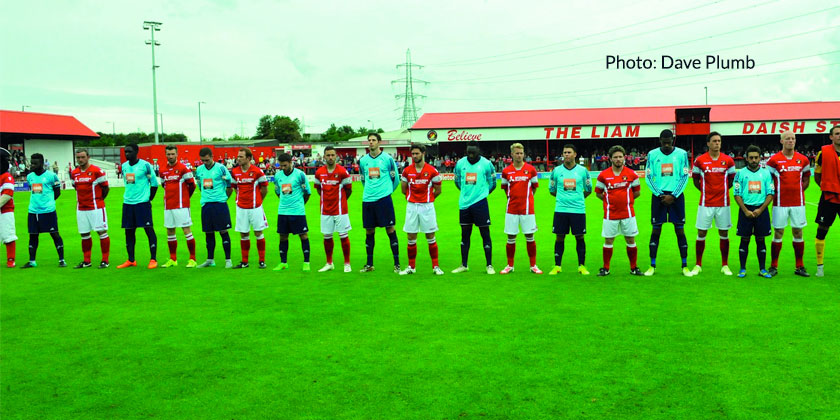 Fleet must negotiate a second-leg semi-final that is much closer to call than in previous play-off campaigns if they are to contest a second promotion final in three years. But Whitehawk are hoping to go one better with their second final in as many seasons and with just a single goal separating the sides, Sunday afternoon could see temperatures on the pitch rising as quickly as those off it.

Danny Mills’ 82nd minute goal for the Hawks makes their task that little less difficult, after Fleet had gone into a two-goal lead courtesy of Danny Kedwell’s thunderous free-kick, but the home side know that ‘simply’ avoiding defeat will take them into Saturday’s final.

Daryl McMahon has plenty of options to change things if he feels the need to and the Fleet boss doesn’t for a minute believe his side should sit back and protect their lead. “We’ve gone into every single match this season with a gameplan to win it, not to draw it,” he told FleetOnline. “We’re at home, we’re really firing on all cylinders at home recently, creating chances, and we’re looking forward to playing at Stonebridge Road again. There’s no point inviting them on and sitting back, we have to approach the match like all the others.”

McMahon’s only injury concerns are at full-back with an injection on Matt Fish’s ankle having not been enough to get the player through the play-offs, while Bryan van den Bogaert is unavailable, so Joe Howe and Dean Pooley are likely to keep their places. Reiss Greenidge is back from his Hemel Hempstead loan to provide cover if needed for the Bonner-Clark-Acheampong trio but the Fleet manager is not unduly concerned about his defensive options. “We’ve plenty of lads who can fill in there if it came to an emergency,” he said. “So I’m not worried on that score. Dean has been terrific when called upon this year.”

With Sam Deering and Anthony Cook playing the wide roles on Wednesday night, McMahon also has Sean Shields and Jordan Parkes up his sleeve, while the temptation to play John Paul Kissock at home is also there, though Dean Rance’s performance alongside Stuart Lewis in the first leg would make it difficult to displace him.

Whitehawk, by contrast, don’t have quite as much room for manoeuvre in their squad – but they’ll need to come out all guns blazing as they seek an early goal to unsettle what will be a large and partisan home crowd. And they have form in the department, having raced into a first-half 2-0 lead when the teams met at Stonebridge Road in the league, before Fleet pulled it back to 2-2. That responsibility will fall largely on the shoulders of Mills, but he does have formidable support in the form of Sergio Torres, Jake Robinson, Dave Martin and Nick Arnold, the latter particularly impressing on Wednesday with two or three close efforts. There is also Sam Gargan, an unused substitute on Wednesday, who plays in a forward role. Having beaten Hemel Hempstead 3-0 on their own turf only last week to qualify for the play-offs, however, Fleet will need to be mindful of the Hawks’ ability for goals.

McMahon was pleased with his side’s creation of chances but was shouted down in midweek by his opposite number Pablo Asensio who rather curiously claimed Whitehawk’s second-half performance produced “a tsunami” of attacks towards the Fleet goal! Asensio told BBC Sussex Sport that Whitehawk had enjoyed 40-43 minutes of possession in the second period and had played 90% of the time in Fleet’s half. “Of course they had chances,” Asensio said, “but compared to the 20 chances we had in the second half, it was nothing.”

Skipper Torres wasn’t winning many friends among the Stonebridge Road faithful either, saying: “We played the best football and we didn’t deserve to lose the game. We know we can score goals against them. They don’t play much football, but they are a strong team, they kick it long a lot.”

McMahon will be happy enough with that fighting talk and he wants to galvanise his players and supporters at Stonebridge Road on Sunday to create an atmosphere akin to the Chelmsford second half. “The fans have been terrific all season and we want them to really make it difficult for the opposition now,” he said. “I spoke to some Chelmsford players after our 3-1 win a few weeks back and they said they didn’t feel they could beat the team and crowd together after we started to get on top because it gave our players such belief. It came as a bit of a shock to them. I think there was a feeling in the ground that we weren’t going to be beaten that afternoon and that affected the opposition who didn’t think they could beat us either at that point. That’s what we want for the next game, I want our opponents to hate playing in front of that and to hate coming here and having to play here.”

As an aside to the sparring between the two teams, Whitehawk’s Asensio and Mills won the Vanarama manager and player of the month awards for April respectively earlier this week. Whether that turns out to be a morale boost or the traditional curse will become apparent come 5.45 on Sunday.

Ed Miller has been Ebbsfleet United's communications manager and programme editor since 2014 and responsible for the club website since 2007. Contact him on ed.miller@eufc.co.uk
PrevPreviousFleet announce second-leg segregation
NextFleet 1-2 Whitehawk (3-3aet / 3-2 on pens)Next