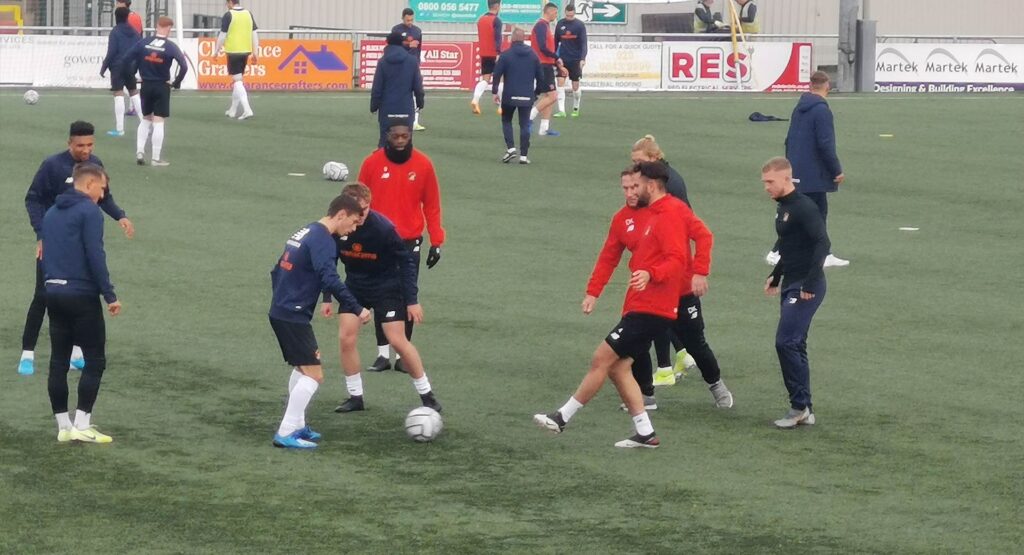 Fleet youngsters Warren Beattie and Emilio Regini-Moran were given an excellent opportunity last week to develop in the club’s first-team environment as they rounded off a memorable few days by appearing at Sutton United in a practice match.

As part of Dennis Kutrieb’s desire for closer ties and a clear developmental path for promising players among our youth ranks, the two teenagers were brought into the first-team camp and replaced Charlie Rowan and Michael West 15 minutes from the end of Friday’s friendly.

Wide midfielder Regini-Moran was signed aged 16 on National League forms by the Fleet back in August 2018 when he was named on the bench at Bromley. Since then, he has gained senior football experience with Kent Football United, while teammate and full-back Beattie has been gaining minutes with Punjab United. And both youngsters appeared for the Fleet in last season’s Kent Senior Cup.

The Academy’s Daniel Gill, who works alongside Danny Kedwell in running the U19 side, told FleetTV after the Sutton game: “It’s been highlighted what Dennis’s background was and the work he’d done prior to coming to Ebbsfleet, he’s got a big focus on trying to develop youth players. Ever since he’s come in, he’s been very, very supportive and proactive in terms of trying to find out a little bit more about the Academy, what we do.

“And as time goes by, we’ll start to look to mirror and implement his messages from first-team level all the way down so that we have a synergy. So when the boys come into this environment, it’s not new to them. Dennis has been very proactive. Obviously, first and foremost, his aim is to make the first team successful, but that’s not at the detriment of the Academy, he’s been very supportive.

“They’ve been in all week with the boys. When they go in, they don’t just go in for a session to make up the numbers. They go in for a week and he treats them the same as everybody else. The boys around them treat them the same. It’s like a big family. Nobody’s treated any differently whether they’re Academy boys or senior first-team players. They’ve got to earn the right and they’ve got to buy into what Dennis is requiring and looking for. And if they do that, then they give themselves the best possible opportunity.”

And Gill now believes that under Kutrieb’s watch, closer links between the various age groups right through to U19 and then first-team level will bear fruit.

“It’s always difficult to try and bring Academy players in,” he said. “It’s very demanding but the only thing that can come from this here now is the relationship’s positive. The boys are in regularly and that can only help those that get given the opportunity to demonstrate and showcase that they can compete and they can handle themselves at this level.

“One of our key values is we want players to play at the top level. We want to give them the knowledge and experience so if they can get in and around the first team here, great. So they know what’s required of them to go and play adult football. The two boys today will have seen the speed, the physicality, the mindset, how quickly they’ve got to think.”

Full-back Beattie said, “All the players were very welcoming, they made us feel very comfortable. I was over the moon to get picked, just the two of us, I was absolutely delighted.”

Teammate Regini-Moran added, “I always work hard and give 100% every time and to get the chance is good because I’ve worked hard for it.”

Recruitment for next season’s Academy is under way and potential players can sign up their interest now via this link.

Ed Miller has been Ebbsfleet United's communications manager and programme editor since 2014 and responsible for the club website since 2007. Contact him on ed.miller@eufc.co.uk
PrevPreviousFleet friendly clocks up more minutes in the tank
NextPREVIEW: Es meet again in evening encounterNext