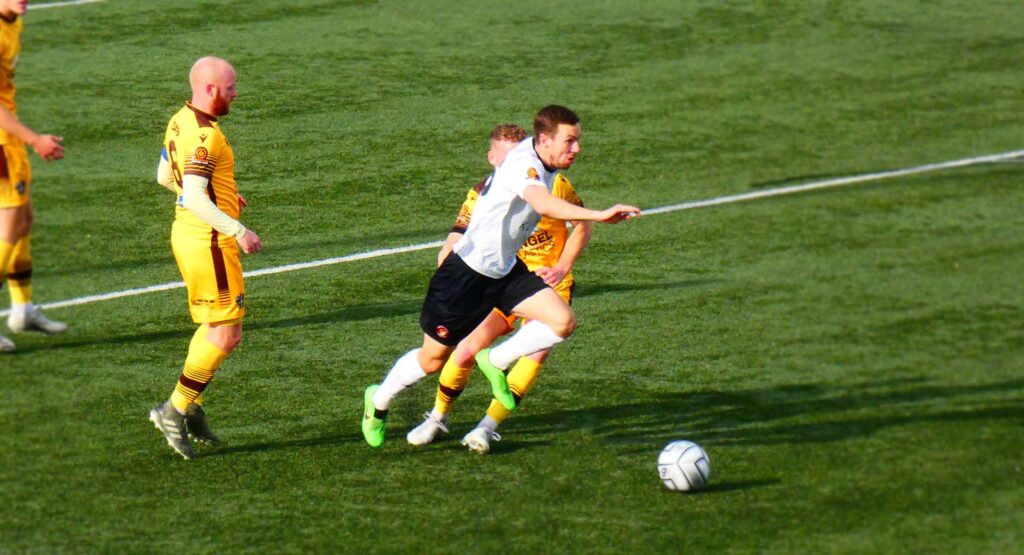 Fleet friendly clocks up more minutes in the tank

Dennis Kutrieb took the opportunity to get minutes into numerous members of his squad who might not have played as regularly so far this season, with Alex Eirich getting through 45 minutes in the second half and appearances for two Academy players in Warren Beattie and Emilio Regini-Moran.

Against a strong Sutton lineup, Fleet held firm to their passing game and enjoyed plenty of possession with Adam Mekki and Iffy Allen on one flank and James Dobson and Will Wood on the other adding width for the visitors.

Neither side forced a strong chance in the opening spells with Tom Hadler only called upon once in the first 20 minutes. Sutton had a penalty appeal waved away when Tobi Sho-Silva slipped inside the box before Fleet began to venture forward with more menace from around the 25-minute point.

Wood got into the box with a strong run from Greg Cundle’s pass but his effort was turned behind for a corner. Cundle, for his part, was heavily involved for the Fleet. On 26 minutes he got a shot on target but it lacked real venom and was gathered by the Sutton goalkeeper.

Four minutes later he was put through down the middle courtesy of Alfie Egan but with defenders closing either side, he was forced to hit a low drive that once again was saved by the keeper.

And Cundle’s next contribution was from the right wing, a delivery floating beyond and behind the Sutton defence, forcing Aaron Simpson to hastily head away for a corner.

Hadler was called into action to punch away a Robert Milsom free-kick eight minutes before the break after Jake Goodman’s tackle earned Sutton the set piece from a dangerous area on the edge of the box.

But Fleet finished the first period with another chance, quick-thinking linkup play between Allen and Michael West twice exhanging passes. Allen’s teasing cross was dropped by the Sutton goalkeeper and Cundle’s turn and attempt to place the ball in the corner of the goal was blocked.

Fleet brought Jordan Holmes and Eirich on for the second half and just four minutes in West got clear down the right to attack into the box. Sutton cleared it only as far as Mekki whose low shot from 25 yards was deflected behind.

Sutton had their best opportunity for a breakthrough on 53 minutes but Sho-Silva blazed that high over the bar when he had more time to pick his target.

The home side were only delayed for a further three minutes, however, before they took the lead with a cheeky but well-taken effort. Callum Kealy found himself facing goal from the left of the penalty area and with Fleet defenders expecting a cross to his supporting players, Kealy disguised a lob over Hadler from an angle and in it dropped to the far side of the goal.

A flurry of substitutions changed the flow and formation of the game, particularly in defence for the Fleet. One replacement, Reece Grant, tucked an effort just wide from inside the area only two minutes after coming on, while West’s departure on 79 minutes afforded him only a minute’s respite before he was called back as Ben Frempah was forced off with a knock.

Sutton wrapped things up seven minutes from time when substitute Omar Bugiel converted their second but Kutrieb will have been pleased with the application shown by his players with their performance showing the strength in depth in the Fleet squad.

Meanwhile, the two Academy players Beattie and Regini-Moran played 13 and 11 minutes at left-back and right midfield respectively as Kutrieb cast his eye over some of the club’s younger players (more coverage of which this coming weekend).

Ed Miller has been Ebbsfleet United's communications manager and programme editor since 2014 and responsible for the club website since 2007. Contact him on ed.miller@eufc.co.uk
PrevPreviousKit us out for our 75-not-out
NextFirst-team friendly is first step in Kutrieb’s youth philosophyNext