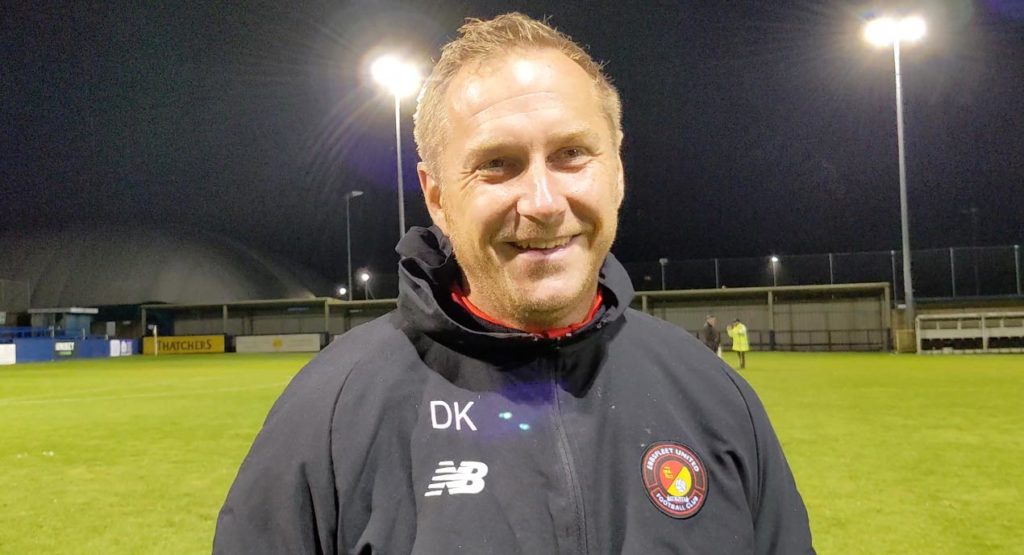 Dennis Kutrieb praised all three goalscorers as Dominic Poleon’s hat-trick, together with Greg Cundle and Jack Paxman strikes, made the long journey very much worth the effort for the Fleet fans in attendance.

The Fleet boss was naturally pleased with the five-goal blast and while he singled out the goalscorers, he said the team performance, together with the help the players give each other on the pitch, was key to the final score.

“[Greg Cundle] is outstanding since pre-season,” Kutrieb told FleetTV. “We always talk about football and good luck and bad luck. But I strongly believe you get what you deserve over a long time and that’s what he deserved. He’s (been) so good for many weeks now and it’s been coming.

“It is similar to what I said after the cup game, with Elliott Romain. I can say only the same thing about Greg Cundle. He is a good character, a good lad, he’s working so hard and it’s not just the chances [he creates] that he plays, not only that he scores a goal or gives an assist. It’s for hard work, it’s for not falling on his feet, he’s there and he takes his chance. He was working so hard for every minute and I’m really happy for him. And for Paxman, who came off the bench today and scored his first of the season as well.”

Hat-trick hero for the second time this season, Dominic Poleon’s second of the night was a fantastic solo goal on the break and Kutrieb believes there’s much more from the January signing to come.

“That [goal] was outstanding,” said the Fleet boss. “It was a counter break, he had the ball at his feet so he could drive in and get a good shot on target. They could see how much quality he has, but always he needs to be on his toes as well and needs to be prepared for it.

“When he is ready he is able to do such things, he showed us in the first game, he showed us today. He is able to score lots and lots of goals but he needs to make sure he wants it and is really prepared for every opponent, for every centre-back. Marts helped him a lot on the pitch today, Raks helped him a lot on the pitch today, that he gets [the ball] in the right areas – but as I said it’s a team performance.”

Kutrieb had words of warning about the two goals Fleet conceded that might have given Chippenham a route back into the game, but having discussed those, the boss was keen to concentrate on the overall performance and result.

“I’m really pleased,” he said. “After three and a half hours on the coach and now three and a half hours back, it is always important you get a good result, that you get the three points. It was not only three points, it was a great game with five goals. Of course, we conceded two as well but it was a great performance from the boys. I’m really pleased we got the points against a strong Chippenham side.

“We need to make sure that everyone understands we don’t want to concede goals. So even if we score five, we don’t want to concede. As a manager you are always on your own toes as well to make sure that everyone is aware of what can happen, what is the situation, what [the other team] are talking about at that moment in half-time, what they want to do. You need to be aware that you don’t let them back in the game, which we did again in the second half when we scored the third goal. That’s where we need to improve. But after such a performance, I don’t want to talk too much about what we need to improve. I think today is a day where we can talk about what we did really well. The first 25 minutes, it was unbelievably strong and then in the second half how we created chances and how we scored our goals was fantastic.”

And Kutrieb praised the home side’s persistence, also, with Chippenham fourth in the table before kick-off, having beaten Havant at home, and coming off the back of an impressive 3-0 win at Concord.

“Big credit to them,” he said. “They started to believe they can get wins and can get points, they did really well. So they never gave up, they always tried very hard. It was a little bit unlucky from my point of view that we conceded an easy first goal that [let] them come back in the game. I was not really happy. But the first 20-25 minutes was outstanding from our boys. They [were] so much on the front foot, created one chance after another, so many shots on target. I would say it was the best performance since I’m here at Ebbsfleet, the first 20-25 minutes. But you need to make sure they can’t come back in the game, even when you’re so on the front foot. Then they started to believe that they can get something out of this game, that was the reason why we started to struggle at times during the game. But this win, it gives us a big push.”

Ed Miller has been Ebbsfleet United's communications manager and programme editor since 2014 and responsible for the club website since 2007. Contact him on ed.miller@eufc.co.uk
PrevPreviousChippenham Town 2-5 Fleet
NextFor the fans and the gaffer!Next