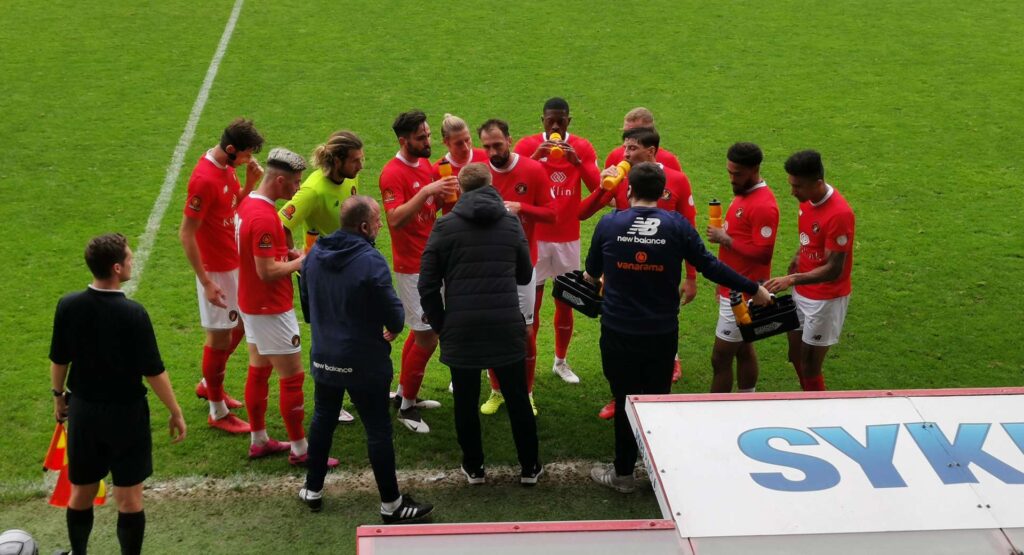 It may have seemed these past few years – with the odd pre-season friendly, the number of mutual players and the media interest surrounding Billericay Town – that our clubs have always been closely intertwined.

Yet in any competitive environment, it is more than 18 years since the Fleet and Billericay have locked horns – and we’ve actually only played each other eight times, all within the space of four seasons in the Ryman League.

The relatively short trip this Halloween into Essex provides Fleet with an immediate opportunity to build on the superb, hard-working and dynamic victory over Hungerford Town last weekend, with the memories especially of that slick, eye-catching winner still fresh in the mind.

But as the goalscorer Bobby-Joe Taylor said only half an hour after those exploits last week, the players have to forget that now and move on to the latest fixture in the calendar. The Vanarama National League South is unforgiving for anybody not focused on their next and most immediate task.

Fleet will aim to round out October’s first month of competition with a third league win that would take us within touching distance of the top spot – Dorking Wanderers and Hungerford above us play each other, Dartford face fellow hotly tipped Havant & Waterlooville while in-form Oxford City host Hampton & Richmond Borough.

But it’s New Lodge where Fleet eyes will be concentrated and with Tobi Adebayo-Rowling and Lee Martin returning to duty from their brief absences last weekend, manager Dennis Kutrieb’s squad enjoyed almost a full complement to select from.

There is, of course, a defensive gap or two – Jake Goodman serves his final match suspension at the same time that Charlie Rowan (unsuccessful in his appeal against last week’s red card) begins his. It’s therefore a timely return to fitness for Ben Frempah who played the entire second half unscathed last week although, as Kutrieb has shown, there are other defensive setups at the manager’s disposal.

Billericay, meanwhile, are looking to kick-start their season having suffered a penalties defeat in the Emirates FA Cup on the season’s opening day and then lost their first three matches of the NLS campaign.

They’ve conceded twice to each of Tonbridge Angels, Bath City and Havant & Waterlooville and sit third from bottom without a point.

The league table doesn’t lie is a cliché best observed a little later in the season, however, as it certainly holds little sway three or four matches in – and Billericay’s squad and experience is such that an upward move will surely come sooner than later.

We know plenty about manager Jamie O’Hara’s side, of course, with Lawrie Wilson and Frankie Sutherland providing much of that experience. But there’s also Jai Reason, Jake Robinson, Luke Wanadio, Ronnie Henry, Paul Konchesky and Shamir Fenelon to provide knowhow of this and higher levels.

While it’s a squad perhaps slightly more pared down and less noteworthy than those previous owner Glenn Tamplin built, it’s nonetheless one full of recognised names.

Billericay have enjoyed two weeks off since they let a 1-0 lead slip at home to Havant – the question is whether that will have done them good and whether Fleet’s energetic win last Saturday was more of an advantage as another opportunity to gel and get more competitive minutes into the players.

Fleet’s last visit to New Lodge was in September 2001, Che Stadhart, Danny Lye and Craig Wilkins earning a 3-1 victory en route to promotion. This will be our fifth trip to Billericay with a record of won two, drawn one and lost one… curiously the exact same league record we have in the 2020/21 campaign so far!

• The home club will be providing live streaming for this match and that can be purchased on their website here.

Ed Miller has been Ebbsfleet United's communications manager and programme editor since 2014 and responsible for the club website since 2007. Contact him on ed.miller@eufc.co.uk
PrevPreviousClub update: October 30
NextFleet thank National Lottery players for their supportNext