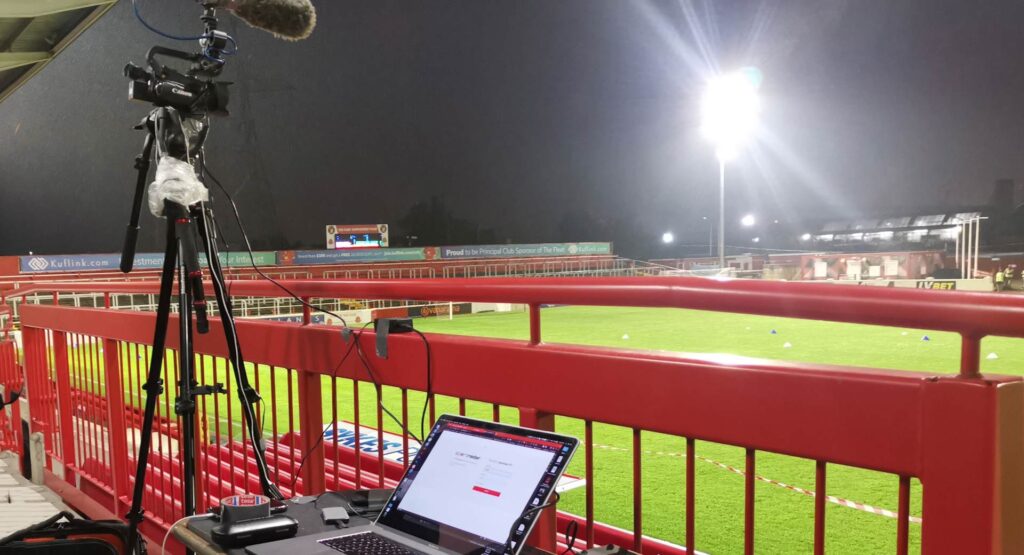 Two wins, one draw and one defeat in the first four opening league matches of the season has delivered a month of highlights along with some disappointment as the squad settle into the tough week-to-week Vanarama National League South routine.

We know football will deliver wins, draws and losses throughout the season at some stage; however, the squad is showing commitment and a belief to dig in and keep working and fighting on the pitch, for each other and for the club, which we are sure you will appreciate and value. It remains the biggest disappointment that you all can’t witness the effort and performances live.

Our home fixture that was scheduled for November 7th against Concord Rangers has been postponed due to their progress in the Emirates FA Cup. We await official confirmation from the FA – however, both clubs have agreed to play this match on December 8th so pencil that into your diaries.

We are obviously very disappointed, as you are also, that we are not in the FA Cup First round Proper on 7th November. To fall short after nine penalties and a disappointing draw was not what we hoped for and not what we wanted to do as a club in the cup this year. However, the disappointment has been noted and will be remembered when we next have the opportunity to progress in this great and historic competition.

Charlie Rowan appeal
Charlie Rowan received a red card last weekend v Hungerford Town and the circumstances were such that we felt strongly the card and subsequent three-week suspension it carries should be appealed. The club had full footage of the entire incident and we felt Charlie was very unlucky to be dismissed. Unfortunately, we were unsuccessful in the appeal on the grounds that the evidence was not sufficient to prove the card was erroneous.

Funding
By way of an update, the National League financial support funding has been agreed and will be distributed imminently. This financial support is hugely important to all clubs, including us. Gate revenue has made up the majority of our revenues in recent seasons and the current rules about playing behind closed doors leaves a large shortfall in our revenues month to month. The funding will not replace those losses in full. However, we must be grateful for the National Lottery and the DCMS for assisting our leagues at a time when so many are in need and suffering financially.

Streaming
Our streaming service has now been up and running for home matches and we really do appreciate and value you logging in and being with us via the stream. The understanding of season-tickets holders who have been flexible and adjusted to the “new norm” has been crucially important in assisting the club financially, as is the effort and commitment of those supporters who pay at the gate in normal times who have taken up a pay-per-view stream of our home matches to tune into.

Ed Miller has done a great job in getting the streaming set up and he has been helped greatly by our club staff and volunteers. We won’t name everyone as it has been a real team effort – however, we do know who you are and we are truly grateful. The team are always working on ways to improve the service with added commentary from Chas Webster being an example.

Streaming numbers are often overstated in the media and by clubs. In reality, watching football by stream is a very new behaviour by most football supporters and certainly our supporters. The technology needs to be learned and it will never replace being here in person as the best way to watch the team play. Depending on the match we may have anywhere between 300-450 viewers, including of course our season-ticket holders who receive free access. The numbers will never replace the revenue gap the current pandemic situation has created but the revenue does assist.

Matchday staffing
With the behind-closed-doors situation and with everyone missing live football so much, there have been some questions about who actually attends matches, how many, and what they do. We thought it might be beneficial to outline the staffing on a matchday for you, so that when you hear the cheers from a nearly empty Kuflink Stadium after great winners (such as Bobby Joe Taylor’s header last weekend), you know where the noise is coming from!

Each club, home and away in the league, can have up to 32 people in the ground – that covers players, management, technical and medical staff, and up to 10 directors. This fills up rather quickly whether we are at home or travelling away.

We as a club tend not to have a large directorship. However, we have a squad of 22 players and most matches Dennis Kutrieb prefers to have the entire squad in attendance. We have Dennis, Lee Taylor, Christopher Franks and Scott Chalmers-Stevens on our coaching staff. Katie Knowles heads up our medical team which consists of an excellent group of young interns who commit many hours to the support and welfare of our playing group weekly. We also have an excellent video analyst who, like our medical interns, commits many hours of support at matches and during the week. (As a side note, the high-quality learning environment and attention to detail our internship program has provided the playing group and staff throughout pre-season and now week-to-week in the league is something new to the club this season and is on par with programmes of EFL clubs.)

Our club secretary Peter Danzey, kit manager Maggie Danzey, and our Football Operations and Equipment Manager Robert Mucci, along with CEO Damian Irvine, make up the list of matchday staff who may be in attendance on any given day. Depending on the number of interns and players attending each match, there then is room for some club directors.

Because of the reliance on streaming, there is a separate allowable allocation for media personnel, and we have our media manager Ed and cameraman Lawrence Hughes. They are also supported by our ground announcer Dave Lockwood on home matchdays who volunteers alongside a social media volunteer. We are also introducing a new marketing intern from the UCFB in coming weeks to assist Ed with more content in order to bring as much information and matchday content to you all as possible.

The away team will usually bring two or three media on top of their 32 also, which brings us to approximately 72 people plus the three match officials.

We do have scout requests from other clubs to come and watch matches and these requests have to be granted on a very limited basis… and we only provide access on a reciprocal basis to those clubs who accept our scouting requests should we wish to visit them. We also try and only provide access to scouts who represent clubs we, or our opposition, meet in the immediate week or two after the fixture.

Then we have a number of data entry collectors, usually three or four per match. These data collectors scout games for various platforms such as the live-score update apps many of you may use and are at most grounds most weekends. Along with two or three local print and radio media from the home side and the same again for the away side, these media and data collectors are usually seated in the Main Stand towards the Plough End when you are watching on the stream.

Usually at matches there is also an FA match assessor.

We have a groundsman and maintenance person on site for all home matches who oversee and work with our volunteer crew. Our volunteer crew is vital in getting the game on. Whilst we do not have any gate revenue, we still have a number of compliance, health and safety needs in terms of exit and entry gates and walkways being controlled, social distancing and face-protection monitoring, temperature checking, gate and car park monitoring and access control.

At the last match we had six volunteers preparing and repairing the pitch before and after warm-ups and the match. We also had six volunteers in total (three on each goal) to place and remove the goalkeeper warm-up goals before kick-off. Both the divot team and goal team then spread around the ground during the match to retrieve, clean and sanitise footballs that leave the pitch.

Under league protocols there is a strict process around this and so we have had to put a system in place rather than utilise ball boys and girls. We had two volunteers on car parks to manage the away team and home team players and officials’ vehicles and access, and four entry and exit stewards ensuring the red and amber Covid zone areas are secure and that emergency egress is clear should it be required.

So at any given home match there can be up to approximately 98 people within the ground including all players and officials. We have noticed at away matches that volunteers and club staff have taken full advantage of the behind-closed-doors environment to vocally support their team, and so you will hear cheers and support from club staff, non-playing players, and volunteers during the match.

As always if any supporters have any specific questions or queries please do email at info@eufc.co.uk and we will be glad to hear from you and respond in kind.