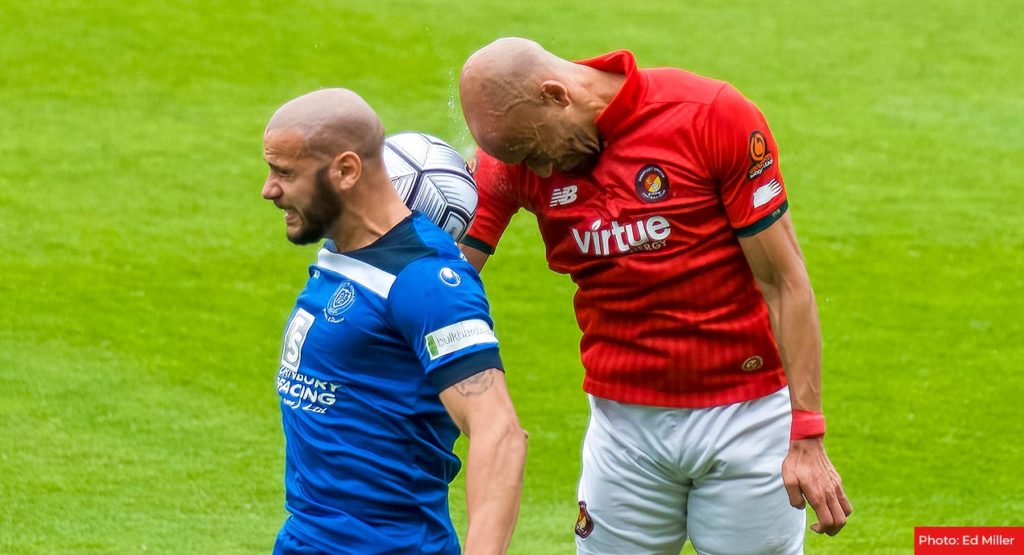 With just the small matter of the promotion final standing between our last meeting with Chippenham Town at the Kuflink Stadium, it seems like no time at all since the Bluebirds were pitching up for a crucial fixture.

And only two weeks before that one, they had secured a valuable point against the Fleet on their way to what then seemed a hugely unlikely tilt at play-off qualification.

All that is water under the bridge now, of course, as we embrace a whole new campaign and Fleet get the season started on home soil yet again – for the eighth time in the past nine years.

There’s probably little either manager can learn from the other’s setup and tactics at this stage although the personnel will of course have been tweaked with a close season having passed between our last meeting and this one.

For the Fleet, supporters will be busy second-guessing what Dennis Kutrieb might do selection-wise from a fully fit squad with strength in depth and quality across positions. With seven new signings knocking on the door for selection alongside established players who delivered third place and a promotion final last season, the guesswork over the preferred starting XI will certainly be plentiful.

Fleet’s pre-season has been a strong one, with wins over Punjab United, Chatham Town, Ramsgate and Herne Bay, a draw against a very strong Colchester United side plus Corinthian, and just a solitary defeat arguably against the run of play against West Ham’s U21/23s.

For Chippenham, much of their early preparations were dealt a blow with the loss of key defenders to Bath City – skipper Kieran Parselle and accomplished left-back Danny Greenslade. For much of the summer, there was little news of new business but the Bluebirds succeeded in tying down the bulk of their squad from what was an outstanding season for them in 2021/22 and plugging the gaps left by the departing duo.

The Bluebirds’ most recent pre-season outing was a 0-0 draw at Melksham Town, a game won on penalties by Chippenham. Elsewhere, they have beaten Cirencester Town and Hartley Wintney, drawn with Cardiff City Academy and Highworth Town and lost to Bristol Rovers and a Bristol City XI.

Last season’s finish of seventh and subsequent defeat of Dartford in the playoff eliminator was the Bluebirds’ highest ever finish to a campaign and that taste of success, which included seeing off Havant & Waterlooville to grab the Hawks’ spot in the playoffs, will mean that Chippenham won’t come as a surprise package this season.

Not that such a fate has bothered the likes of Eastbourne Borough or Hungerford Town who both built on a progressive 2020/21 to sustain their progress last season – and Chippenham will be looking to do exactly the same in 2022/23. It’s up to the Fleet to stop them before they get going as the new campaign rolls off the production line.

On-the-day ticket sales are available from the windows by main reception, accepting card and cash payments. Turnstiles open at 1pm but they will only accept online tickets (printed out or on your device) and tickets bought at the windows on matchday. There is a dedicated gate for season-ticket holders but they may also use their cards through other turnstile gates.

Please also support our post-match live music set from Josh Hassell from after the game… all supporters are welcome to join us after the final whistle for this free live entertainment.

CATERING OUTLETS
Check out our food stalls (to the left of the main turnstiles entrance, there is our Würtsel Haus German sausage experience and straight ahead as you enter the ground is the Manhattan Grill for all your burger, hot dog and more needs!). Pop-up bars are also situated near to the turnstiles and by ‘Geeks Corner’ between the Plough End and old stand.

CONDUCT
Supporters are reminded that the club in tandem with the wider game as a whole are committed to the eradication of flares, smoke bombs and pyrotechnics at our matches and the National League applies and recommends a zero-tolerance approach to anyone attempting to bring such devices into stadia. We have also had to install new fencing along the Plough End and supporters are asked not to stand or block the gangway along that area. Please co-operate with stewards’ requests and refrain from any and all racist, homophobic or otherwise threatening and inappropriate behaviour – all measures taken by ourselves and our fellow National League, North and South clubs are for the enjoyment and safety of all our supporters and visitors.

Ed Miller has been Ebbsfleet United's communications manager and programme editor since 2014 and responsible for the club website since 2007. Contact him on ed.miller@eufc.co.uk
PrevPreviousBest wishes to Fleet walking footballer
NextFleet 3-0 Chippenham TownNext