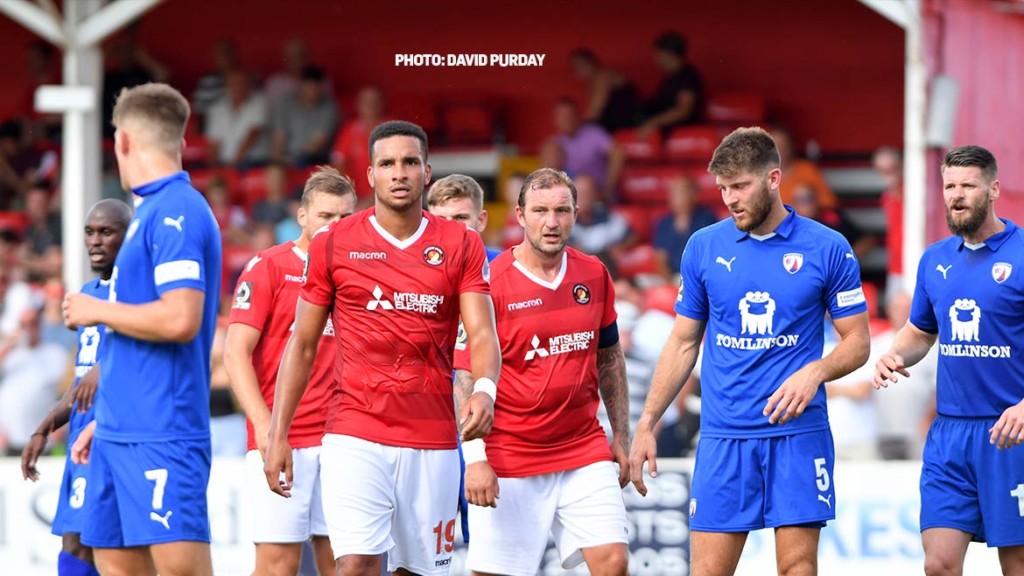 New year, new destination. The Fleet make their first ever trip to the Proact Stadium looking to avenge the opening-day defeat at the hands of Chesterfield and so propel themselves further towards the top seven. But, as is a familiar position for the Fleet, they head into the game hoping that a previously down-on-their-luck home side don’t react to a recent managerial sacking and decide to begin a revival there and then.

Having dispensed with the services of Martin Allen after just one win in 22 league matches and a drop into the relegation zone, Chesterfield’s players will be marking their cards on home soil for the first time in 2019. Having lost 4-0 on their own patch to Solihull Moors in Allen’s final game in the hotseat, the Spireites have drawn 1-1 at home to Hartlepool and picked up another point in the return at Solihull, both times coming from behind to level things up.

Caretaker manager and former Crystal Palace FA Cup finalist John Pemberton is currently in charge of affairs at the Proact Stadium and he’s looking to maintain an unbeaten start as the Fleet come to town. He’s already agreed a deal to keep Doncaster loan duo Alex Kiwomya – who has scored four goals since his move – and Alfie Beestin, the latter having featured at the Kuflink Stadium last season in our FA Cup tie against Rovers.

Gone from the home side’s lineup are Zavon Hones (now Bromley) who scored the penalty that won Chesterfield the game back in August and former Fleet loanee Gozie Ugwu who moved to Boreham Wood while goalkeeper Shwan Jalal is another high-profile casualty of Allen’s mid-season cull. Tall striker Tom Denton, who featured against the Fleet for North Ferriby and FC Halifax Town in the past, faces a late fitness test while the influential Kiwomya is a big doubt. A player who had a big influence on the game at the Kuflink Stadium is former Celtic and West Brom striker Marc-Antoine Fortuné – he appeared over Christmas for the first time in a month and found the back of the net in the New Year’s Day clash at Solihull.

Pemberton, the club’s academy manager, hasn’t been afraid to blood some of his youngsters in the first team in recent games and Levi Amantchi or Jamie Sharman could feature.

While Chesterfield’s record – Pemberton says they are “desperate” and “crying out” for a win – doesn’t make for pleasant reading, their one win in the past few months did come at home against Salford City so Fleet will certainly face a tough test in front of a partisan crowd of upwards of 4,500.

Garry Hill’s side have scored 11 in three games over Christmas and the New Year and a point at least would give the manager what he’d deemed to be a satisfactory points haul prior to the hectic festive schedule. His squad rotation has worked to perfection, with each of the Fleet’s three strikers weighing in with goals and two successive clean sheets showing the back players are working just as hard to impress.

But with only 17 players to choose from, the manager must be hoping that Danny Kedwell has shaken off the ill effects of a bout of flu while there must also be some tired legs in the squad among those putting in shifts in midfield, Andy Drury having played four games in a row, with the last three of those across a full 90 minutes. Myles Weston also missed out on New Year’s Day awaiting the birth of his child. Freddy Moncur has been given a taste of the action in recent games while Dean Rance also appeared to suffer no ill effects after replacing Jack Payne as a second-half substitute at Braintree Town.

The Proact Stadium will be a sharp contrast for visiting Fleet fans who were at Braintree – the 10,000 all-seater stadium, which opened in the summer of 2010, is certainly a level above its National League counterparts. Away fans are housed in the Harold Lilleker & Sons Stand and a ticket office for visiting supporters is situated behind the Rubicon north stand. See here and here for links about ticket prices and purchasing tickets.

Ed Miller has been Ebbsfleet United's communications manager and programme editor since 2014 and responsible for the club website since 2007. Contact him on ed.miller@eufc.co.uk
PrevPreviousVanarama National League Promotion Final: Early Bird Offer
NextThe Wood take Shields to end of seasonNext