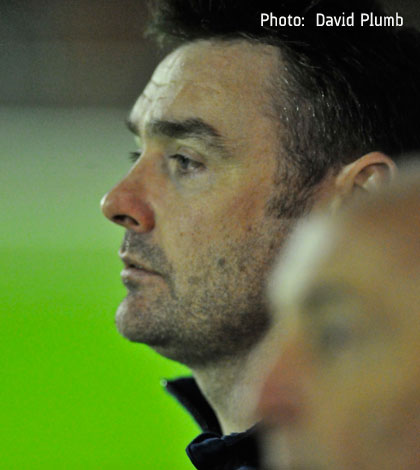 Steve Brown was delighted but left wanting more from his side following their 3-0 win over Farnborough. And the Ebbsfleet United manager’s euphoria was reflected in the mood of his players, with the boss declaring his dressing room “buoyant” after the recent run of positive results.

“That’s four straight wins in all competitions,” Brown told BBC Radio Kent’s Charles Webster. “We’ve only conceded one in those games and that’s the third clean sheet on the spin if you include the Whitstable game, so all in all it was a fantastic day.

“In that dressing room at the moment it’s buoyant. My message to the players after the game today is be relentless. We won 3-0, I wanted four or five. I wanted a clean sheet and five goals. I want the players to send out a message that we’re hitting the ground running at the right time of the year. Those win statistics obviously help confidence-wise and it does send a signal out. I think the Staines performance and today’s both warranted the victories so we’re in good fettle at the moment.”

And Brown praised his side’s resolve despite a period before half-time when they were on the back foot. “I thought the first 20 minutes of the game, we were very good. Then we had a very poor spell for the latter stages of the first half and Farnborough were in control of the game but we didn’t concede which is what I like about us at the moment.

“When we have a period where we’re not quite at it, we’re still very difficult to break down. We had a chat at half-time and our second-half was as dominant as our first-half was against Staines here a couple of weeks ago.

“We started so well and got a goal and we were playing well enough to go and get a second. For some reason we took our foot off the pedal and the midfield became a bit loose and they began to control play in the midfield but without really threatening us. But it was still annoying enough to address at half-time and have a little pop and I thought the response was excellent. I don’t think they even had a shot second half and if they did it was long-range and off-target. We defended very well, and extended the lead.”

Despite reaching 50 points and enjoying a seven-point cushion in the play-off zone, the Fleet boss refused to look beyond this week’s Bath fixture.

“I didn’t have a points target,” he said. “I wasn’t sitting there at the start of the season going I want this amount of points after this amount of games. But what I will say is after nine games we had nine points and one win in the bag. If you work that out, I’d say we’re well above promotion targets if you discard the first nine. Unfortunately we can’t and therefore we’ve always played catch-up against Eastleigh and Bromley and we’ll continue to try and catch up and put as many points on the board as we can.

“It’s very much one game at a time. It depends a lot on the sides below us. There are still a couple in the chasing pack that have so many games to catch up on that theoretically they can overtake us. But it’s going to be a hell of task to win seven or eight straight games to do so. But we’re in the hunt and we keep the distance against the sides below us by putting the three points on the board, but 75 I guess is probably there or thereabouts.

“The fixture list has been pretty cruel with all the postponements meaning we’ve got eight away games out of nine which is tough but we’ll see.”

Ed Miller has been Ebbsfleet United's communications manager and programme editor since 2014 and responsible for the club website since 2007. Contact him on ed.miller@eufc.co.uk
PrevPreviousRance’s recipe for success
NextBrown praises attacking trioNext