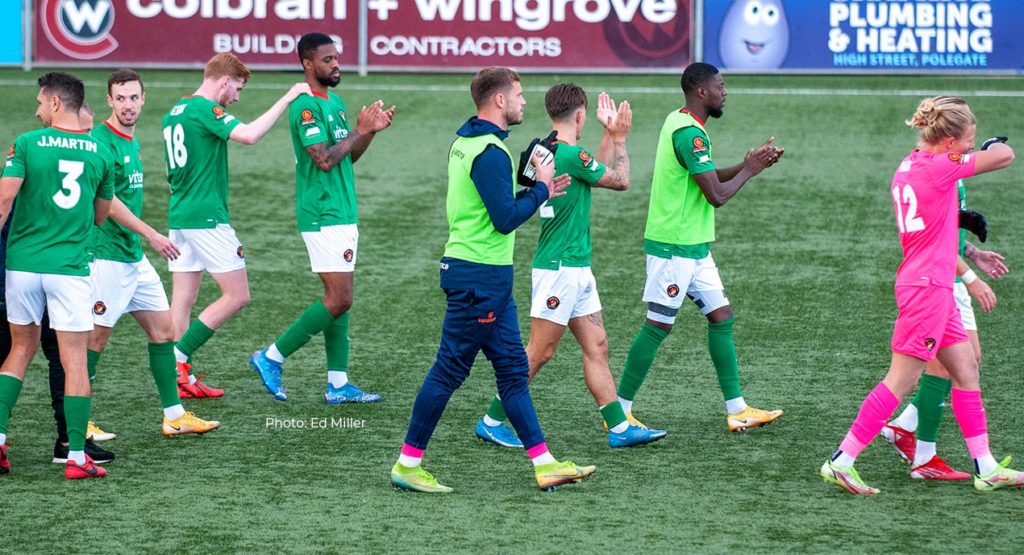 That’s 19 games against Eastbourne Borough in Fleet history now and it’s 19 games undefeated as Dennis Kutrieb’s side maintained the proud run of their predecessors with a 1-0 win.

And the manner of the victory will surely be one of the more memorable wins in that series for Fleet fans after their side’s immense efforts with 10 men to hold on to the three points. For Dennis Kutrieb, his team’s defensive doggedness and positivity going forward in a second-half of attrition was the main takeaway from Saturday afternoon.

“You could see that the team is able to defend as a team,” the Fleet boss told BBC Radio Kent’s Charles Webster. “I couldn’t see big chances [for Eastbourne], one very late in the end, but when you’re down to 10 men and you only allow the opponent to get one chance, I think that’s outstanding and that’s the main point for today. Now we can look after the boys, that they get a quick recovery because we have another tough game on Tuesday.”

Greg Cundle was the matchwinner with an early strike and Kutrieb praised the player he brought back into the fold after release – though the Fleet boss admitted he might have liked that goal to have arrived a little later in the game!

“You can see Greg’s outstanding at the moment,” said Kutrieb. “For many weeks we talked a lot about him. He had not his best season last season but he had a great pre-season. He’s always a threat for us and he really deserves to score goals more and more because he has the chances and I’m happy for him.

“It was a tough game, 1-0 I would [have taken] straight away. We had a great start but perhaps it would be better if we didn’t score so early, we stopped playing a little bit and were not so focused as before. But of course we had enough chances to score a second one early in the game but it was not clinical enough. But it was such a great fight, especially after the red card.”

Of that red card, Kutrieb had few complaints though felt some sympathy for Will Wood after the player’s long lay-off and determination to stake a claim back in the side.

“I will watch it back on the video and obviously he [connected] with him and that’s a red card,” he said. “I could see straight away he will lose his head in this moment. I felt very unlucky for him because [it was] his first game starting after many games. He’s been a bit unlucky with his injury and he wants to try harder and harder and harder, even more so when they get a start in the game.

“He really wanted to prove that he’s good enough for us and I was happy with him, he played a good game but made a wrong decision there so I think [the referee] can give a red card there.”

Celebrations with supporters at the end of a hard day’s work suggested this Fleet team are really connecting with their followers despite a season of lockdown, but Kutrieb felt the fans have been with them since day one.

“Not one time have I had the experience that there’s something wrong from the fans,” said the manager. “Even after the Hampton game, after the Havant game, with defeats they were there for the boys. I said it last week that it’s a good bond at the moment, that we have to take care of a good relationship. You have to take care with the fans, they have to care about the players – and I really like that the players have a strong bond to each other at the moment as well because I really love to win games like everyone else but we can’t take it for granted.”

With six wins from the last six games and successive clean sheets, Fleet’s league and cup progress has certainly been entertaining but with two more games to come, Kutrieb is now allowing anybody to get ahead of themselves.

“Getting up the table is only a result of delivering performances and winning games,” he cautioned. “We don’t need to watch the table if we don’t deliver. If we deliver over the whole season then we can have much fun together and be successful but we need to do it on a daily basis and in every game. Now everyone is happy, tomorrow we can be happy as well and Monday you need to prepare for Braintree.

“Clean sheets, at the moment it’s not regularly [enough]. It’s only two times in a row so it’s momentum definitely but we can’t take it for granted. We need to work hard as we did today – I was very proud of the boys because the workrate was outstanding and that’s the main thing. You can lose games, you can draw games, but you need to fight hard as a team and that’s what they did today.”

Ed Miller has been Ebbsfleet United's communications manager and programme editor since 2014 and responsible for the club website since 2007. Contact him on ed.miller@eufc.co.uk
PrevPreviousEastbourne Borough 0-1 Fleet
NextEgan engages Eastbourne engineNext