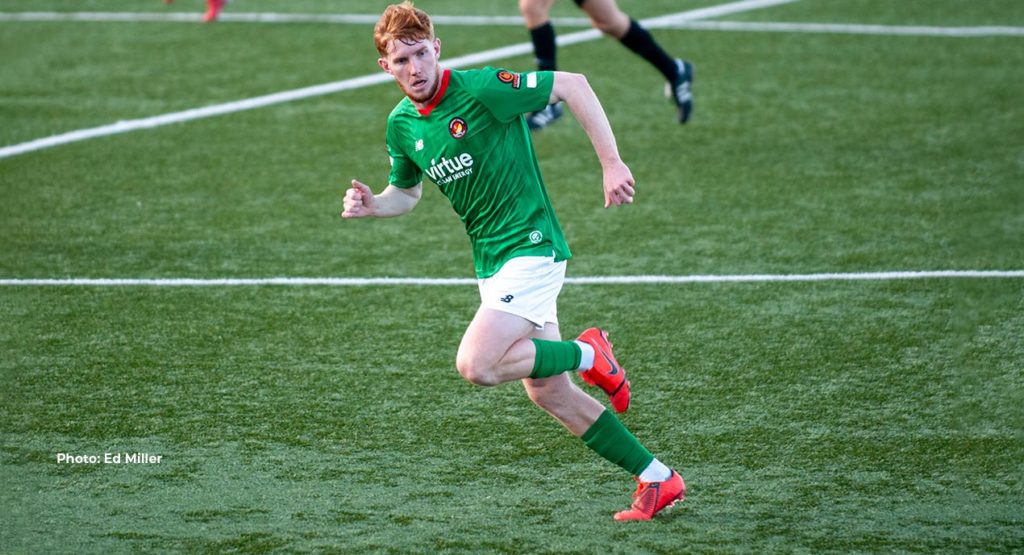 Alfie Egan once again engaged full throttle in pursuit of victory as he clocked up the kilometres in midfield to plug the gap as Eastbourne tried to make their man advantage tell. But the Fleet’s 2019 summer signing was humble in accepting that was all part and parcel of his job.

“That’s my game really,” he told BBC Radio Kent’s Charles Webster. “I’ve got the legs so why not use them? I get it in my system that I just don’t want to lose so I try and do everything. On another day I get a goal and it’s easier for the team and we’re 2-0 up and we can kind of sit in and defend. I tried [for the goal] but it just didn’t go in today. He’s blocked one on the line, one’s just gone past the post but on another day I get one or two but I’ll just take the win to be honest.

“It’s easy to say after the game that the best thing to do is come out and score and then build on it but it’s tough when you go down to 10 men. But as you can see everyone wants to win every single game and whoever we put in the team wants to win so it’s just a good team cohesion out there.”

Egan had a similar role in the win at Havant last season when Fleet saw out a three-pointer with only nine men on the pitch but it’s not all graft for the midfielder, who credits his manager with developing his game.

“He plays the way I want to play so it just feels easier for me than having to grind out performances where I don’t really enjoy playing – but I love playing the way he plays so it’s just credit to him.

“He picked the players that he wants to come in and as you can see when we do get playing, we are very very good and that’s credit to him. We work on it every single day and we work really hard in training so I’m just happy that we can do it on the pitch as well now.”

Egan’s loan spell at Maidenhead at the end of last season is another factor in his growth as a player and that has benefited the club on his return to the Kuflink Stadium.

“It was a different style of play [at Maidenhead],” he said. “The gaffer wants to play in that league and it’s tough, it’s physical but it added something else to my game. Now I know where the ball is going to drop and I can see the second balls and stuff like that so it did add bits to my game.”

And speaking of adding bits, Egan says the recruitment at the Fleet over the summer has been crucial to the heights the current side are currently enjoying.

“We had a large group that we kept from last year so a lot of us knew what we’re doing,” he explained. “And we added a few and they’ve added so much quality to our team. Everyone’s getting the flow of what we want to do and what the gaffer wants to do and it’s all clicking now. We can achieve whatever we want to, whatever we put our minds to we can go out and achieve. That’s not putting anyone down because there’s some great teams [in the league], you see out there today Eastbourne caused us problems, but if we’re together and we really work for each other we can achieve really good things.”

There’s more than a hint around the Fleet of an evolving process and an excitement mounting and Egan has felt it within the squad and amongst the supporters.

“As we said in the circle, these are the games that you’ve got to win if you want to achieve something in the league,” he said. “To push up there and get up in first, second, third. We play good football, the gaffer wants to play good football and we do play that most of the time – but when we go down to 10, these are the games that really matter. We went in the changing room and everyone was buzzing because we grafted for that one.

“Eastbourne are a good team, they passed it well, they know what they’re doing and they’re drilled so they caused us problems but as you can see, we can play football and we can graft and defend so we’re showing both sides of our game.

“[And the fans], you see them today after we won! They knew that we really put it in today. You could see everyone was singing and dancing out there and it just feels there’s a good buzz around the place, everyone can see it.”

Ed Miller has been Ebbsfleet United's communications manager and programme editor since 2014 and responsible for the club website since 2007. Contact him on ed.miller@eufc.co.uk
PrevPreviousOutstanding effort extends Eastbourne record
NextGet your match tickets… in the pub!Next