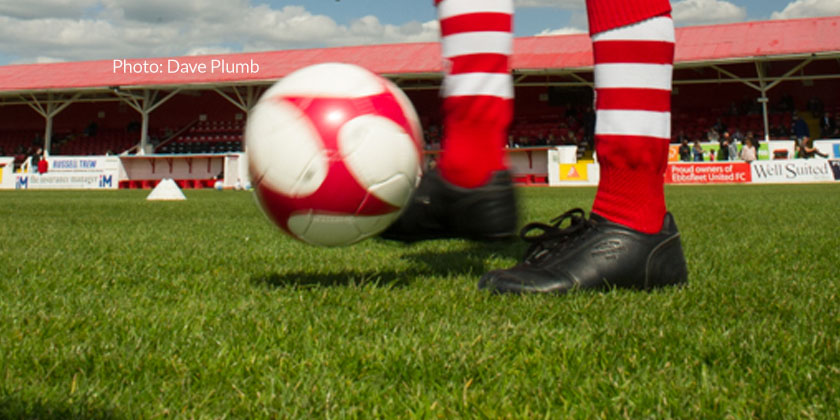 “Our job is reaching 96 points, nothing else”

Daryl McMahon’s side head into their final league game of the season knowing they’ve done just about everything to drag Maidenhead United back within reach. After the Magpies won at Stonebridge Road in November, they enjoyed an 11-point cushion through to the new year and anyone talking up Fleet’s chances of top spot spoke in cynical whispers about “doing a Sutton”.

“Doing a Sutton” entailed a 26-match unbeaten run and while Fleet haven’t quite matched that, victory over Oxford City on Saturday would see McMahon’s squad with a record of just one defeat in 24.

And that’s the only target the Fleet boss has set his side this weekend in front of another bumper crowd – to win.

“At 5 o’clock on Saturday afternoon, we need to have 96 points. That’s it,” McMahon told FleetOnline. “We can’t affect anything anywhere else. Of course we hope Margate can do us a favour, but that’s between them and Maidenhead.”

The manager is aware that supporters will be tuned into both matches but he’s asked the home fans to whip up an atmosphere to ensure his players get all the backing. “As much as I say don’t be glued to Twitter or the radio and other games, it’s human nature, you can’t help that. The fans are going to be doing that. I just hope whatever happens in that other game they’re behind us on Saturday like they have been all season. We make sure we have another great atmosphere so that when that whistle goes, regardless of the other game, it brings us to a point where we win this one and see where we go from there. Our players have to concentrate, do their jobs and then we see how it falls.”

Without the injured Bradley Bubb and Danny Kedwell, Fleet have been shorn of two of their most effective weapons but McMahon isn’t feeling sorry for himself. “We’ve shown across the season we can be adaptable,” he said. “We have got goals from all areas of the pitch and we’ve shown that all through the season too so I’m confident with that. Obviously you’d rather have Keds and Bradley out there but we just have to get on with it.”

And McMahon hasn’t completely ruled Kedwell out of contention if the play-offs beckon. “He got his cast off on Wednesday and has got a splint on now. It’s still heavily swollen though. I wouldn’t totally rule him out if we were in the play-offs but it’s one you play by ear. He won’t be ready for this game and probably not the first leg of any semi-final but there is a possibility, I’d say no more than that, for him to be available after that.”

And just as he faced life without two of his strike force, McMahon allowed himself a wry smile about the injury situation. “Just as that happens, everyone else is fit,” he said. “Everyone who has had a niggle throughout the season has shaken it off finally. Everyone’s looking forward to this game and hopefully we can win again. If it doesn’t prove to be enough, then we’ll embrace what comes after and we’re equally up for that task.”

As to Saturday’s opposition, the Fleet boss warned that with minds possibly elsewhere, nobody should think Oxford City are simply turning up to see 2016/17 off. “Oxford have been on a decent run of form. They’ve won three on the bounce and I’m sure they’ll be doing their best to spoil our chances.”

City may have the joint lowest scoring record of any club bar the relegated three but caretaker manager Mark Jones has been doing much in the past two months to address that. While veteran striker Jefferson Louis continues to lead the line, Jones has also recruited some exciting young prospects in Ezra Forde and Kaiman Anderson. Both have been among the goals lately, Forde coming from youth football and Anderson on loan from Shrewsbury Town, and they’ve helped see Oxford climb away from the danger zone into 14th place, where they’ll finish the season regardless of Saturday’s result.

With three clean sheets and three wins, City will be hoping to end the season on a high and frustrate the Fleet. Although two of those wins came against relegated Gosport and Margate, a 2-0 victory over Chelmsford City was no mean feat. They’ve had some good wins on the road this season as well, including at Bath, Poole Town, Hampton and St Albans, but by the same token have shipped six goals at Maidenhead and conceded five at home to Hampton in the past month.

Fleet won 3-1 at Marsh Lane earlier in the season, though only six or so of the City squad that day are likely to be in the squad this weekend – and boss Jones is another new face, having replaced Justin Merritt shortly after our fixture. Jones managed to recruit two defenders Guri Demuria and George Essuman (from Dover) before the transfer deadline, who both made debuts this month, and he could be without skipper Lee Henderson who was out injured last week.

Jones is in line for the manager’s job full-time and a win over Fleet on Saturday would do his case no harm. He told the Oxford Mail, “It’ll be tough. We are going to a team that are second in the table and need to win. It’s a great opportunity to show what we are capable of. I’d much rather a game like this than a dead rubber in front of not many people. It will be a very tough game, but we will go there and play with freedom and enjoy the occasion.”

Fleet’s final-day record has been good in recent years, with four goals scored in each of the last three seasons. Fleet fans will settle for any variation on that theme as long as it involves three points… and then we’ll just have to see what blows in from the coast.

Ed Miller has been Ebbsfleet United's communications manager and programme editor since 2014 and responsible for the club website since 2007. Contact him on ed.miller@eufc.co.uk
PrevPreviousBoss backs Bubb to bounce back
NextCongratulations Kenny! Player of the year!Next