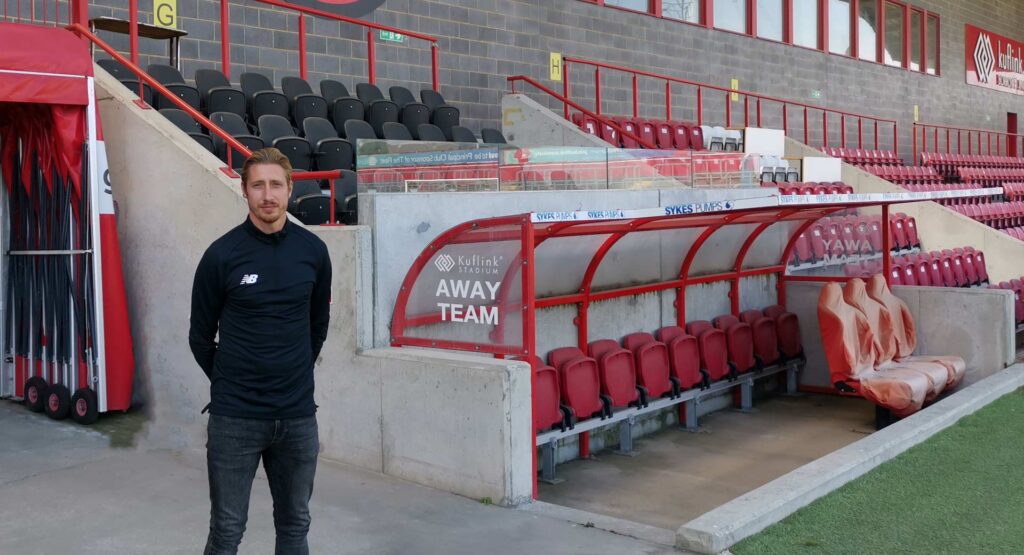 The 33-year-old signs for the Fleet only a month after helping guide Exeter City to a League Two play-off final at Wembley.

Securing Martin’s signature is a real coup for the Fleet who fought off competition from clubs higher up the pyramid to land a player who can boast almost 400 appearances in every division of English football, as well as in the Scottish Premier League and Belgian league.

Martin started out at Manchester United, who paid Wimbledon an estimated £1m for his services as a youth player, and he rose through the ranks alongside the likes of Gerard Pique, Jonny Evans and Ryan Shawcross.

Having turned out for United in the Carling Cup as a teenager, he played on loan for Royal Antwerp and Rangers, which included an Old Firm game at Celtic Park, before spells followed at Stoke City, Plymouth Argyle, Sheffield United and Nottingham Forest.

Back at Old Trafford, he was in the squad at Wembley for the 2007 Community Shield and he earned a Premier League start for the Red Devils against Hull City in 2009 (pictured above) before Roy Keane paid £1.5m to bring him to Ipswich Town in a permanent move.

Martin played more than 100 times across a four-year spell with the Tractorboys as well as with Charlton Athletic on loan before his career took him on to Millwall, Northampton Town, Gillingham – where he was club captain – and, since 2018, Exeter City.

He has played almost 80 games for the Grecians over the past two seasons, operating as a wide attacker or through the middle as support striker, and the move to the Fleet reunites him with Lovell, who in his Gillingham days described Martin as “the best midfielder in League One”.

The club are delighted to secure Lee’s services for the forthcoming campaign and we welcome him to the Kuflink Stadium.

Arriving at the ground earlier today to put pen to paper, Martin said, “Dropping down two leagues is a totally new challenge for me but definitely something that I’m looking forward to. I’m still open to learning, that’s the wonderful art of football, you’re never finished learning and I’m excited to start anew and get going here.” (You can read more from the new signing later on this afternoon.)

To sponsor Lee or any of our squad this coming season, please email info@eufc.co.uk – don’t delay as you could risk missing out on your first choice of player.

Ed Miller has been Ebbsfleet United's communications manager and programme editor since 2014 and responsible for the club website since 2007. Contact him on ed.miller@eufc.co.uk
PrevPreviousFleet offer places for performance and physiotherapy interns
NextEbbsfleet the “perfect fit” as Lee carries on learningNext