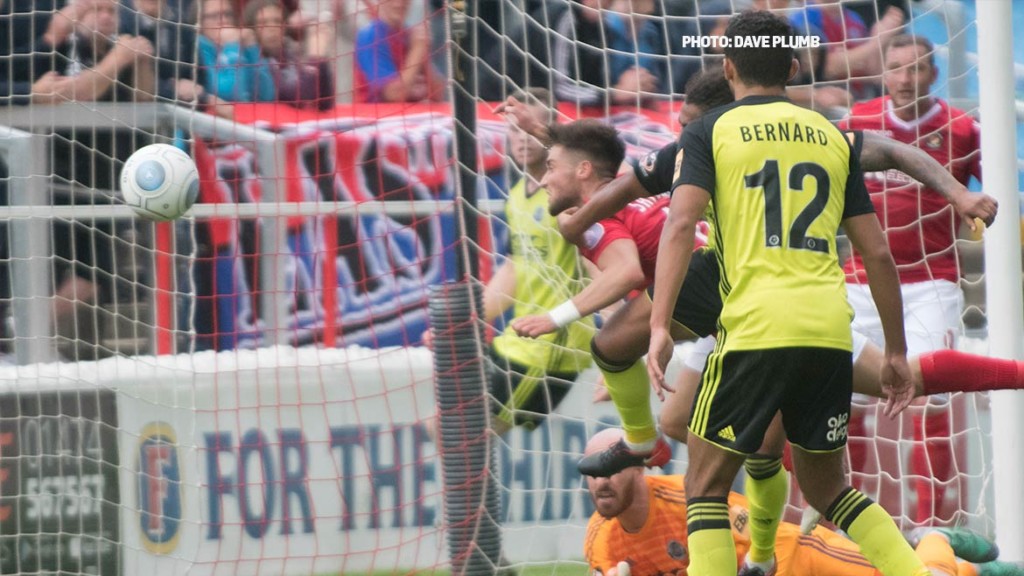 Sean Shields may have scored three goals in two games but the popular winger isn’t one to over-indulge in celebrations. The 26-year-old, now entering his fifth season at the Fleet, can usually be seen saluting the crowd or, at his most euphoric, sliding on his knees for each of his 17 goals.

But over-celebration isn’t in Shields’ locker and his coolness is a positive trait that’s rubbing off on his teammates.

“I’m quite a laid-back person,” he told BBC Radio Kent’s Charles Webster. “I’ve never gone too mad when I score. Maybe if I score in a final one day or something like that, that might change. But for now, I’ll just carry on doing what I’m doing.

“The gaffer said to us before the game, he doesn’t want us going out there panicking or feeling up tight because we haven’t won at home. He said with the amount of chances we’ve been creating, a win’s going to come at some point. It was important we went out there in the usual calm mood to play our football otherwise, especially going 1-0 down, the game can get on top of you. But we composed ourselves, came back well and were worthy winners in the end.”

Shields has now hit 17 goals from 75 starts and 43 off the bench and an improved goal count is something he and the manager have been cooking up between them since the summer.

“A lot of my play is definitely about getting assists, a lot of crosses into the box,” Shields said. “But I spoke to the gaffer early in pre-season and he said he wants me to come off the line a little bit more this season. He thinks I can be effective in central areas and I can score more goals than I have done in the previous two seasons. For me to get three in the last two games shows that so I’m looking to carry that on.

“I try not to do [a goal target]. It might affect your game in the sense you go out looking to score when other people are on. I’m trying to score in every game like any other attacking player. As long as I can keep producing the goods, staying in the team, helping the team, that’s all that matters. I’ve always been confident when I’ve gone out onto the pitch. I think I had a good season last year and I definitely enjoyed playing my part. We were successful in terms of making the play-offs and I don’t see why we can’t do that again this year. The first two home games this season were a little bit disappointing because I felt we played well, created a lot of chances and ended up losing both games without scoring. It’s great to win today, three goals and we could have scored a lot more.”

Shields’ opener was originally credited to Danny Kedwell by those of us further away from the action and it was a rare conversion with the head for the Fleet winger – or a “poke over the line” as he termed it.

“Keds did all the work, brilliant following in from him, he’s headed it back and the goalie’s got a touch on it to sort of push it back across the goal and I’ve got the last touch to send it over the line,” Shields explained. “It’s a goal I wouldn’t normally score so it’s quite nice to get them – I don’t think many people expect me to score a header. Not that it was a big, bustling header where I beat someone, it was more of a little poke over the line but I’ll still take it. The second one, Westy had the shot, it was a nice break from us. It’s come out just outside the box and it was bobbling a little bit so I was just thinking, strike it as truly as I can and thankfully it’s gone in the bottom corner.

“[Andy Drury’s goal] was a great finish. We all know what Jukesy’s about so I don’t have to sit here and talk about that too much because he’s quality all over the pitch and that finish summed that up. It’s such a cool finish, he’s passed it into the bottom corner and it’s the all-important goal because it’s got us the win.

“It’s obviously great for an attacking player to get the goals, we’re looking for goals and assists. As long as it’s helping the team, that’s all I’m interested in because back-to-back wins are the most important thing and we’re looking to kick on because we’ve got aspirations to be in the play-offs again and try and get into the Football League.”

And despite those aspirations, Shields isn’t getting carried away despite six goals and two wins in two weeks.

“In this league you can never get too carried away,” he warned. “Barnet beat Chesterfield away from home and you’d never have predicted that before the game so for us to sit here and say it’s all going to go smoothly from here would be naive. We’ve just got to target three points from every game, stay consistent and see where it gets us.”

Ed Miller has been Ebbsfleet United's communications manager and programme editor since 2014 and responsible for the club website since 2007. Contact him on ed.miller@eufc.co.uk
PrevPreviousEx-Fleet goalkeeper passes away
NextEastleigh 0-1 FleetNext