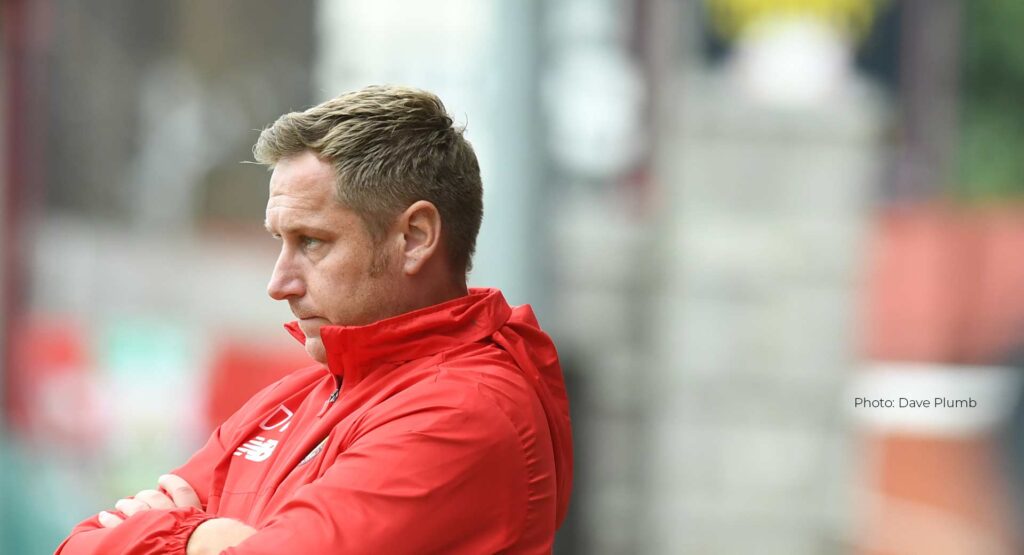 Dennis Kutrieb impressed upon his players before last night’s fixture at Eastbourne that a clean sheet would have been enough to take the three points as he was confident his side would score in the 90 minutes.

So it proved on the one hand, with Alfie Egan celebrating his first strike in a Fleet shirt, but the immediate response by the home side cancelled out thoughts of that clean sheet and meant the visitors took home a point.

“I told the boys before if we have a clean sheet, we will win this game,” Kutrieb told BBC Radio Kent’s Charles Webster. “But we didn’t achieve our aim today so we have a draw. It was a very hard game, but we knew before that we have a hard game. Of course we wanted to win, we wanted just three points. I think we played for it, but it was not good enough.

The Fleet manager believed there was an element of good fortune about Dean Cox’s equaliser but that he was disappointed to concede it nonetheless.

“When we concede such easy goals – to be honest, it was by accident, but that doesn’t matter – we have to stay with a clean sheet, and then we win this game. A goal is a goal, nobody asked for it. Jordan Holmes had a good game for us but he didn’t have much to do, one or two shots on goal for the 90 minutes. But that’s the point when I say I’m disappointed because it was possible to win this game.”

Kutrieb also praised home goalkeeper Franco Ravizzoli for some fine saves in the second half that kept out a first Egan effort and then again from Adam Mekki’s curling shot.

“In the second half their keeper was really brilliant so he saved that point,” the Fleet boss said. “He had a really good game. But for me it’s not enough today, I’m not happy and I’m disappointed because we could win this game, we should win this game because we are capable to do [so].”

Fleet missed Josh Payne and Ben Chapman from midfield, plus Charlie Rowan in defence, but the manager refused to blame that for not winning the match against an Eastbourne side that had played 48 hours before.

“I think that wasn’t the matter for not winning today,” he said. “I think we dictated the game for 90 minutes, so it was a really good game from the boys [from that point of view]. But we have to look at the newspaper tomorrow and there’s a draw, 1-1, and that’s not enough for me.

“[Eastbourne] are able to run, they’re able to fight because they are fit players as well. But I think we can see in the first-half, they didn’t touch the ball as we had much possession, we had many chances. We had two good chances for Lee Martin, one has to be a goal, so with a little bit of luck we have two.

“Every time [we have to go] for 90 minutes; perhaps they thought now we have them, now we have the lead and we will win this game. But as I’ve said many times before, you never will win a game before 90 minutes so you have to keep going and try to score a second goal and finish it.”

Ed Miller has been Ebbsfleet United's communications manager and programme editor since 2014 and responsible for the club website since 2007. Contact him on ed.miller@eufc.co.uk
PrevPreviousEastbourne Borough 1-1 Fleet
NextWrap up warm this Friday 13thNext