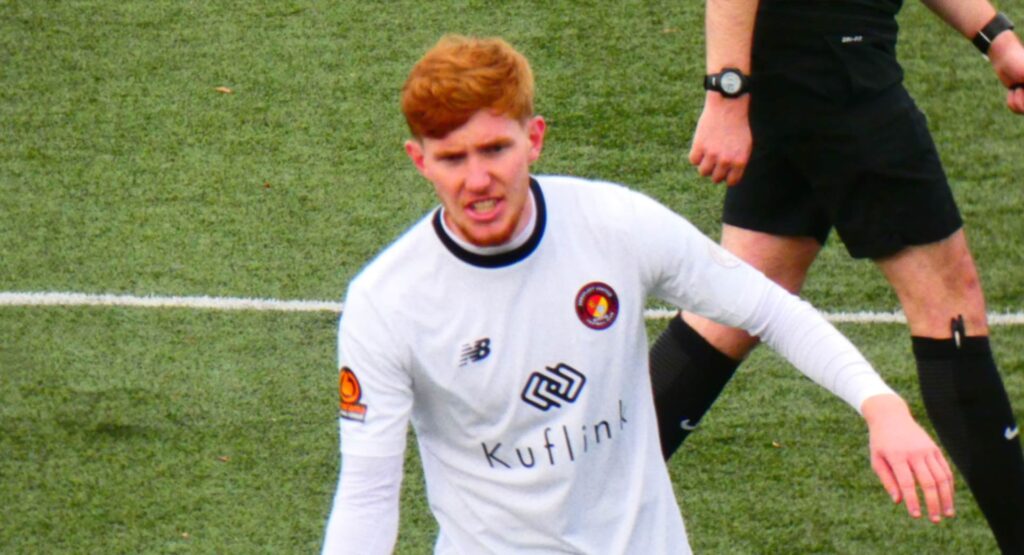 Fleet extended an unbeaten record against Eastbourne Borough to 18 matches but the home side will have been pleased enough with their draw having fallen behind to Alfie Egan’s first goal for the club 17 minutes from the end.

But the Sports struck back within two minutes of the opener to take a share of the points courtesy of substitute Dean Cox.

Dennis Kutrieb was forced into a change in midfield with Egan replacing the suspended Ben Chapman while Will Wood came in for Adam Mekki. Elsewhere Michael West was named to start, with Reece Grant on the bench while Charlie Rowan continued to sit things out like Chapman with a suspension.

It was the third 4G surface for the Fleet in 10 days following games at Billericay and Sutton – and maybe the added zip contributed to a high-tempo opening.

Eastbourne, fresh from an Emirates FA Cup tie at home to Blackpool two days previously, seemed content to match Fleet’s pace and there were three end-to-end efforts in the opening three minutes.

First came Bobby-Joe Taylor sidling across the Eastbourne box and exchanging passes with Rakish Bingham to draw a save low to his near post by goalkeeper Franco Ravizzoli.

Eastbourne scampered upfield and Charlie Walker had the ball in the back of the net but was flagged offside. Then it was at the other end once more, Wood’s intelligent, strong run picking out Bingham in the six-yard box but his attempt was blocked for a corner.

Another chance came Fleet’s way on five minutes, Lee Martin’s swerving effort finding good flight as it curled towards but then away from the far post.

The game maintained that pace for a good portion of the first half but chances for both sides dried up. Eastbourne’s midfield enjoyed a short spell in the ascendancy before Fleet were back on top of their game from the half-hour.

Borough’s cause wasn’t helped by losing the experienced Chris Whelpdale on 16 minutes though they had a great chance when Charley Kendall was put through only to be denied by a calm but decisive tackle from Sefa Kahraman.

His centre-back partner Ben Frempah made another important intervention on 31 minutes, sliding in on a cross into the six-yard box. It looked potentially risky but Frempah judged it well and shepherded the ball to safety.

Fleet’s best move of the half followed on 33 minutes, Wood driving in from the left and quickly releasing Martin inside the box but his effort hit a wall of red shirts.

Things got a little scrappy towards the end of the half and it stayed that way for much of the second. Kutrieb introduced Adam Mekki for West after the break as the rain came down to add to the surface sheen.

Kendall had another great chance for the hosts early on, a one-two with Greg Luer opening a path to goal but the QPR loanee youngster hoisted his effort way over the bar.

Wood continued to work hard down the left, with Taylor behind him gainfully employed in defensive duties as much as his preferred option of getting forward. Wood’s run created half a chance on the hour and he found plenty of space but had little support so opted for goal with a shot that won a corner.

Martin and Egan twice combined well as Fleet patiently searched for an opening, the second of those seeing Egan unleash from the right of the box only for Ravizzoli to make an excellent save.

Mekki went even closer with a thumping attempt four minutes later but again Ravizzoli came to his side’s rescue with another push away to concede a corner.

But Fleet weren’t to be denied. On 73 minutes, Paxman romped forward through the middle on the counterattack. He delayed his pass to beat one man then slid a delivery out wide to Egan who composed himself before driving a low shot beneath the goalkeeper for his first Fleet goal.

It was perhaps typical of a game that for much of the second half had failed to threaten a goal that another followed almost immediately. Eastbourne built down the right and switched play to the other side. Fleet cleared that attempt but the ball fell for Cox and his somewhat speculative effort seemed to be heading away from goal but clipped the far post and wrong-footed Jordan Holmes for the equaliser.

The final quarter of an hour was marked by several yellow cards as Fleet sent Grant on to attempt to regain the initiative but neither side mustered a winner and an away point it was.

Ed Miller has been Ebbsfleet United's communications manager and programme editor since 2014 and responsible for the club website since 2007. Contact him on ed.miller@eufc.co.uk
PrevPreviousPREVIEW: Es meet again in evening encounter
NextKutrieb emphasises clean sheetsNext