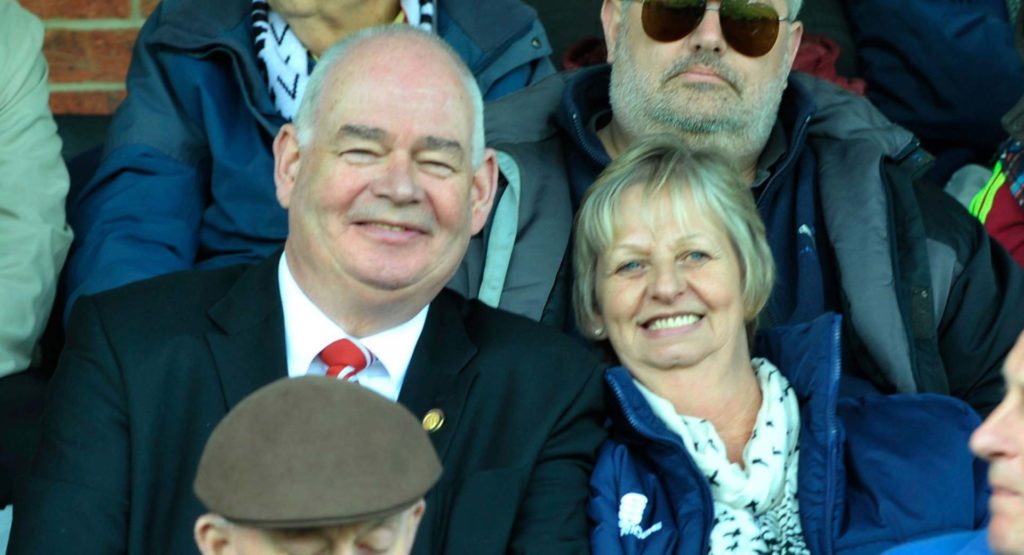 The club would like to pay a warm tribute to outgoing kit manager Maggie Danzey, who has retired from duty this month.

Maggie’s long association with the club has touched all those who have known her and worked alongside her down the years at the Fleet – players, management, staff and supporters have all benefitted from her tremendous hard work, dedication, loyalty and tireless devotion to the club and her role in it.

Maggie was a most worthy winner of the club’s special Bruce Sewell Award in 2019, given by the Fleet Supporters Trust to persons at the club most deserving of it for their hard work behind the scenes.

Following her husband Peter’s appointment as Fleet club secretary in 2009, Maggie’s involvement became formalised in 2013 as she took on kit manager duties after the KEH takeover. She had been part of the Fleet team before that, however, assuming boardroom duties in 2011 in an emergency and she enjoyed it so much she stayed on for the rest of that season.

Maggie was always on hand with refreshment and hospitality for visiting directors, often recruiting other members of her family to help out on matchdays.

As kit manager she has served six managers and eight different playing squads with her tireless work in washing and ordering training and matchday kits, organising the day-to-day provision of all the squad’s equipment needs, becoming a crucial and dependable member of the backroom staff in the process.

Most recently Maggie was asked to lead Dennis Kutrieb and the team out in the Steve Cook Memorial friendly at Punjab United in a poignant moment for both clubs.

Her organisation, commitment, enthusiasm and passion marked her down as one of the unsung but very much essential heroes of the Fleet over the past decade. Maggie returned to work following the lockdown and has recently overseen the transfer of duties to her successor with all the diligence, professionalism and attention to detail that has marked her time at Stonebridge Road.

As husband Peter himself said, “Maggie has lived with football for 50 years, it’s a good job she likes it and deserves a medal for putting up with me, so some people say!”

Dennis Kutrieb said of Maggie’s announcement, “Maggie has been a massive support for me since my arrival and she has taught us all about the Fleet history with information that has been invaluable. Maggie will be missed day to day but we are sure we will see her home and away supporting the boys as she always has been.”

CEO Damian Irvine said of Maggie’s retirement, “We’ve been honoured to have Maggie as part of the club during my relatively short time here, and Maggie’s legacy from her many years of dedication and hard work is vast. We have all benefited from having Maggie’s influence and commitment to the club and she will be missed, although will always be a part of the club and welcome in an honorary Club Kit Manager capacity in recognition of her outstanding service to the club.”

We hope supporters will join with all the staff and squad here at the Kuflink Stadium in wishing Maggie a very happy retirement and a long future of watching – and not washing – the Fleet in action. She can be assured of a very warm welcome from all of us in the years to come.