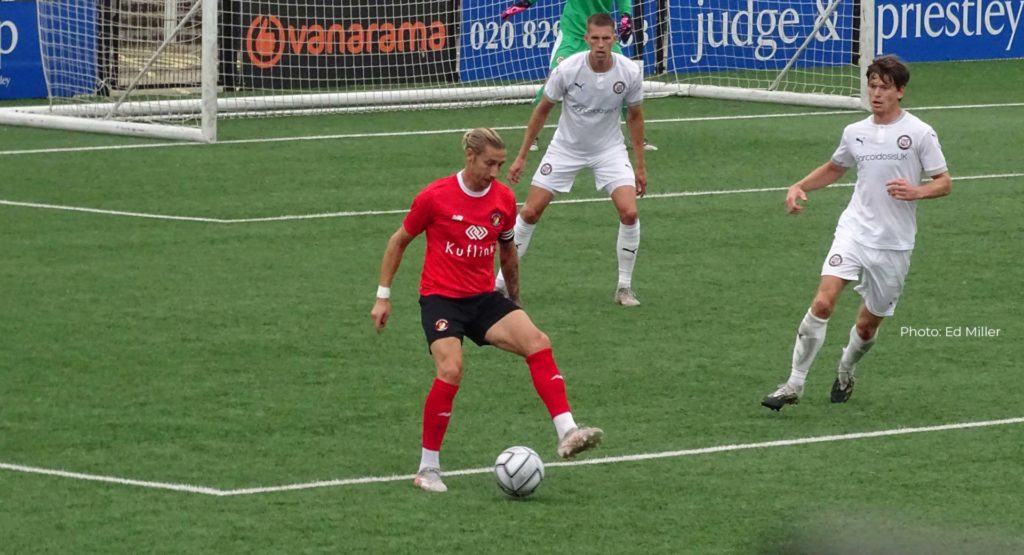 Bromley ended the Fleet’s 100% start to pre-season with a slick, clinical display, two goals in either half giving the Ravens the victory at Hayes Lane – though the margin of victory was harsh on the men in red. The visitors were left to curse goalkeeper Mark Cousins’ display as his determination to keep a clean sheet, particularly in the first-half, kept the Fleet’s forwards at arm’s length.

Bromley included former Fleet men Michael Cheek, Luke Coulson and Corey Whitely in their starting eleven, though there was no place for Chris Bush in a squad that included a couple of unnamed trialists.

Jude Arthurs smacked a shot into the box on 10 minutes with Fleet bodies doing great work in getting multiple blocks in as Bromley looked for the opening after an even first period of few chances. The home side’s Billy Bingham went to ground early on as he landed heavily on his left arm but after a brief period was able to continue.

Chris Haigh was called upon to intervene when Whitely’s cross threatened to fall for a queue of waiting players and he then watched as one of the home side’s trialists rocketed an effort over the bar on 16 minutes.

Fleet had more sustained pressure from the 20-minute mark and both Martins had shots blocked and Chris Solly forced a corner after seeing his effort from another set-piece turned round the post by Mark Cousins. A succession of corners saw Elliott Romain attempt to feint a ball through to Joe Martin but Bromley clawed that one clear as well.

The home side were ahead on 25 minutes when a free-kick was delivered wide right to Cheek. He played the ball back inside with a clever flick of his heel, where one of Bromley’s trialists was in space by the edge of the six-yard box to fire in from close range.

It was 2-0 a few minutes later as Fleet laid some pressure on the Bromley box, Jack Paxman just short with a pass to Lee Martin. Bromley got away on the break as Fleet lost possession and a ball into the box escaped Haigh’s clutches and then went behind Cheek but he managed to toe it towards Arthurs who was able to steer the ball home.

Fleet’s best attempts to turn the screw came eight minutes before the break as Lee Martin had a succession of chances either blocked or on two occasions very well saved by Cousins who was all that stood in the way of Fleet reducing the lead. A Cundle slip in the box claimed half-hearted penalty appeals but the visitors continued to be denied by a confident Cousins as the Ravens went in two goals to the good.

There were four changes for the Fleet in the second-half and initially the visitors took the game to Bromley. Dominic Poleon almost released Alfie Egan for a run on goal, before Rakish Bingham’s shot was well saved by Cousins once more.

But Bromley, ever dangerous on the break, extended their lead with their first chance of the second-half. Cheek’s run through the middle was well-timed, the pass through to him inch-perfect beyond Tobi Adebayo-Rowling and the Bromley top scorer won his one-on-one with Haigh to finish well.

The usual routine of pre-season substitutions made the middle period of the second-half more of a pedestrian affair but Fleet continued to pass it around well as Tanner and Lee Martin both tried to create the opportunities from either side. Substitute West dropped an effort over the goalkeeper on 72 minutes in the Fleet’s best opportunity of the game and as Poleon looked certain to tap home, it came off the post and Bromley’s Webster somehow scooped it away off the line.

Lee Martin’s vision dropped a neat pass into Tanner lurking near the six-yard box but the sub just couldn’t get the power needed to trouble the keeper and Bromley survived that one.

Bromley made it 4-0 some 12 minutes from the end as Fleet played it across the back but under pressure from white shirts, Haigh’s clearance out to Egan was intercepted as the midfielder tried to return it and Marcus Sablier got his foot on it, brought it under control and made no mistake.

Lee Martin continued to strive for an opening but found his way to goal blocked. He laid an effort off for Egan but that was well defended as well by the National League play-off participants. Martin won another corner for the visitors late on with a deflected shot and then Tanner’s cross to the far post was met by Joe Martin. That bounced in the six-yard box with both Poleon and Lee Martin jumping for it before Tanner’s resulting effort from the loose ball went narrowly over the target.

It wasn’t Fleet’s afternoon up front, however, and Bromley held on to their clean sheet as attention turns towards the visits of a QPR XI and Arsenal U23s at the Kuflink Stadium this coming week.

Ed Miller has been Ebbsfleet United's communications manager and programme editor since 2014 and responsible for the club website since 2007. Contact him on ed.miller@eufc.co.uk
PrevPreviousBook a table in the Lounge this Wednesday!
NextKit manager Maggie retiresNext