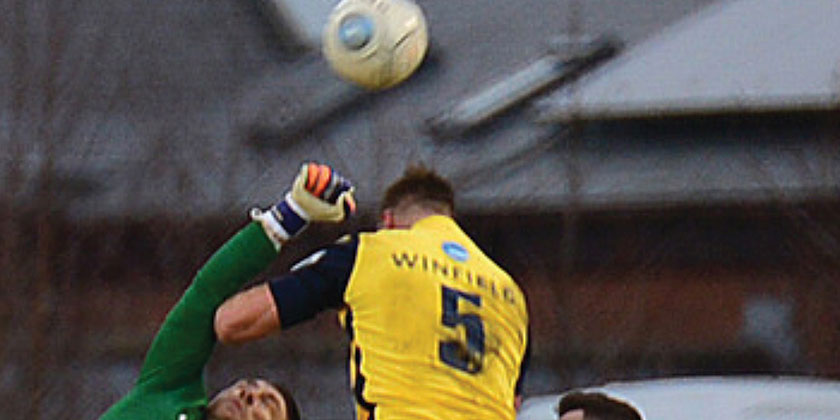 “It means so much and that’s obvious to see,” says Fleet skipper

Dave Winfield has a knack for important goals. Last season he netted a late winner at Maidenhead, then a crucial equaliser to dig Fleet out of a hole in the promotion final v Chelmsford and now he’s popped up on his former stomping ground to prolong his club’s season as it approached its last knockings.

And the reaction of the players to the win, in their headlong rush to join the fans behind the goal on Wednesday night, was a rush of pure adrenaline according to the skipper.

“It means so much to us and it’s obvious to see,” he told BBC Radio Kent’s Charles Webster. “There’s no fake emotions, you’d need an Oscar to be able to [fake] that and not feel anything. Anyone’s who’s played football will know that it’s total elation. I was always confident we had the character, the strength and the will to pull through and get some sort of result through extra-time so I was very pleased.”

The goal against his former club helped clinch Fleet’s place in Saturday’s semi-final at Prenton Park and Winfield reckoned fans certainly got their money’s worth.

“That’s what football’s about, that’s why we all watch football, that’s why people are involved in football,” he said. “I think I would have turned Liverpool off to watch this tonight. It was frantic, it was end to end, there was two late goals, you got penalties and that’s why we’re involved in football and that’s why people pay their money to come and watch it. It can turn on a knife-edge, especially with penalty shootouts, you never know which way it’s going to go. Obviously we were delighted with that. At a point it looked like we were dead and buried but as I’ve said in interviews past, we have the drive and determination and heart to come through.”

A proud Winfield puts Fleet’s success this season down to hard work and determination, particularly as the step up a level meant new challenges for the squad.

“When you have your first season, your debut campaign in the league if you like, everything’s a challenge,” he said. “Every game’s a challenge. To get in the top half of the table is a challenge, to get in the Top 10 is a challenge. Nothing’s ever easy. We’ve done well, picked up some form and it’s worked out for us. If I can’t say anything else, the fact that this group of players does give everything, then that’s the bottom line. I don’t think you win those games without team spirit. You have to have it and the boys have shown it not just today but throughout the campaign. They’ve got to be proud of themselves which I know they are and I’m immensely proud of the group.”

Now the skipper will lead the Fleet out in front of upwards of 10,000 fans on Saturday. It’s hardly a new experience for the former Football League veteran who played in front of 17,000 crowds for Wycombe at venues such as Bramall Lane.

“The boys did it and we’ve got another game to look forward to now with hopefully a fantastic atmosphere up there,” said Winfield. “We’ll prepare as we have done every game this year and we’ll see where it takes us.

Ed Miller has been Ebbsfleet United's communications manager and programme editor since 2014 and responsible for the club website since 2007. Contact him on ed.miller@eufc.co.uk
PrevPreviousYou never let go… ever, says Macca
NextFleet fend off the obituary writers to book a date with destinyNext