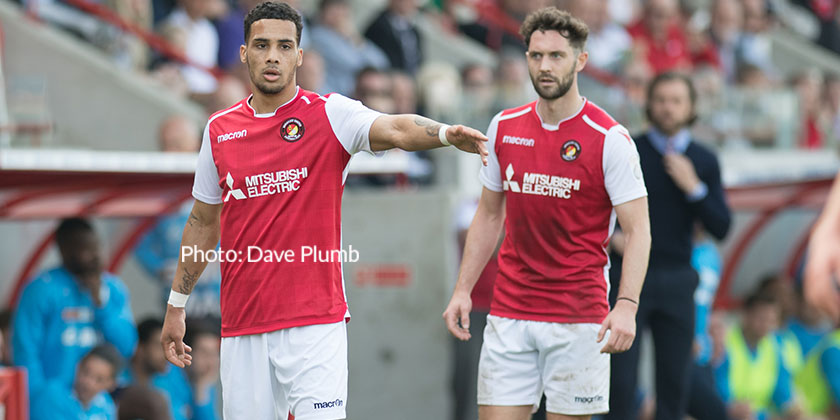 The media is poised, pen in hand, to write Fleet’s obituary for this season. But every time the ink dries, this Ebbsfleet side pulls something out of the bag to send all those pre-scripted words hurtling straight into the wastepaper basket.

Nobody in North Kent dares whisper the ‘W’ word too loudly, far less the acronym ‘EFL’, such is the almost religious devotion to concentrating only on the next game. Yet it’s a short-term philosophy that has stood the Fleet in good stead last season and now this, as the campaign inches ever closer to the ultimate prize.

Daryl McMahon won’t allow focus to waver beyond his most immediate hurdle but even he acknowledges that each passing game becomes bigger, describing the Aldershot play-off as “the biggest league game in Fleet history”. If that game could be described as such, then what about this one? Tranmere Rovers, once seven levels above us in the second tier of English football, along with their multiple thousands of fans stand in the way of the Fleet’s second appearance at Wembley and the nearest we have ever come to the Promised Land of the English Football League. Try reading that sentence back to a time traveller from September 2016 when this side languished in mid-table in the National League South.

McMahon has constantly downplayed his squad’s chances and his calming approach has more than paid off. It’s a hymn sheet he’s sticking to, publically at least. “Tranmere have been excellent this year with the best home form in the division,” he said. “But we don’t care about that. It’s a one-off game, 90 minutes, the pressure’s on Tranmere, it’s not on us. We can go there, relax and enjoy it again and play our football.”

The manager and his staff will have the task of replenishing tired limbs but there’s little need for mental stimulation after Wednesday night, despite the exhaustion of long away trips and pressurised games. The players underwent a cryotherapy session (pictured) before travelling to the north-west and while there’s little time for anything more than video analysis preparation on the training ground, fitness certainly shouldn’t be a problem for a squad that has come through April with flying colours. 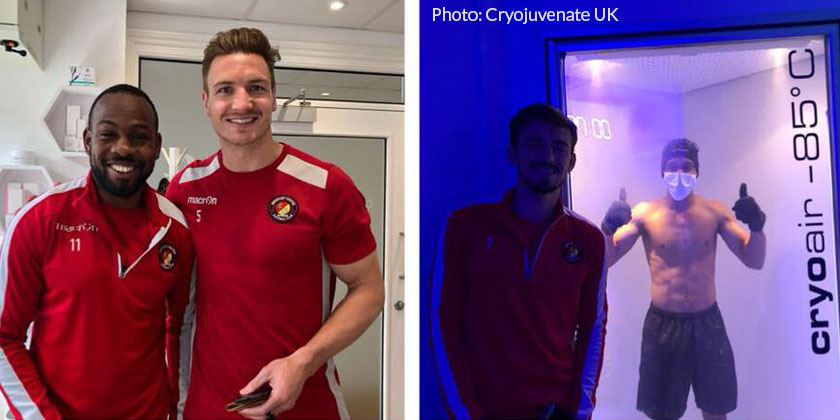 “We’ll be rested as best we can and get ready for Saturday,” McMahon said. “When we played Tranmere away up to now, we’re a massively different team today than we were then. We had no Powell, no Drury, no Whitely or Clark. We’re a totally different side and we were a side off the back of 2-0, 3-0 defeats in that game then. From that day to now the belief and the confidence in this group is high. But we know that first 15, 20 minutes against Tranmere we’ve got to be strong. They’ll probably have 15,000 or 17,000 fans baying for blood straight away and we’ve got to go out and handle that.”

Luke Coulson departed the field with some mild swelling at Aldershot while Sean Shields’ fitness continues to be monitored, though any great departure from Fleet’s tried and tested formation of the past weeks would be a surprise.

That has worked wonders for McMahon’s men who have lost only once in 14 games, with Tranmere the only side to win at home against the Fleet since New Year’s Day. That convincing display by Micky Mellon’s men will naturally be focusing Fleet’s minds ahead of this semi-final but as McMahon pointed out, it was a very diffferent Fleet side, down on its luck from a succession of poor results. The contrast now could not be more different.

It’s clear the key to any potential Fleet success will be in defence, with skipper Dave Winfield in charge against a strikeforce that has found the net in each of its last 29 outings. Rovers have stormed up the league from a season’s low of 18th to take the runners-up spot for the second year running and turned around fan opinion that was previously baying for manager Mellon’s head. 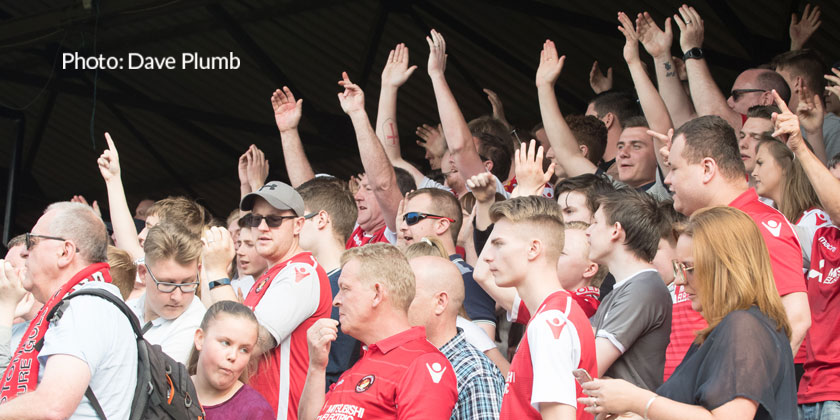 The home side are hoping for anything from 10,000–15,000 fans to pack into Prenton Park and it will be an experience the Fleet as a club aren’t used to in recent times. The squad, however, has more than enough experience to cope with as many as eight individuals having played in front of such attendances at League Two level or higher.

The threat posed by the likes of Andy Cook and James Norwood will have been drummed into Fleet’s defenders, with Cook on 24 goals for the season and Norwood not far behind on 19. Rovers will be without some key players, however, with Conor Jennings sidelined and Ben Tollitt also missing. Adam Buxton, James Wallace and Jake Kirby are also doubtful.

Another key clash will be that between the two battle-hardened veterans Steve McNulty and Danny Kedwell, both players making a mockery of their ages with consistently excellent performances throughout this season.

Tranmere have rested players and one shouldn’t read too much into their two defeats to end the season. A virtually second-string side lost at Solihull and although Hartlepool defeated a somewhat stronger lineup at Prenton Park on the last day of the regular season, it was likely the Rovers players weren’t going all out unnecessarily in that one.

Having relaxed at home through the week as Fleet travelled from Gateshead to Torquay and then played 120 high-energy minutes at Aldershot, Tranmere will clearly be the very much more refreshed side going into this game. But as Daryl McMahon pointed out in March after Fleet’s long lay-off, that can often work against you. And with Fleet’s impetus gained from a fantastic run of two games a week, one more 90 minutes isn’t going to drain the tanks.

But two more 90 minutes is the aim. Wembley is the immediate prize but Tranmere is the focus. History beckons…

Ed Miller has been Ebbsfleet United's communications manager and programme editor since 2014 and responsible for the club website since 2007. Contact him on ed.miller@eufc.co.uk
PrevPrevious“It means so much and that’s obvious to see,” says Fleet skipper
NextTranmere Rovers 4-2 (aet) FleetNext