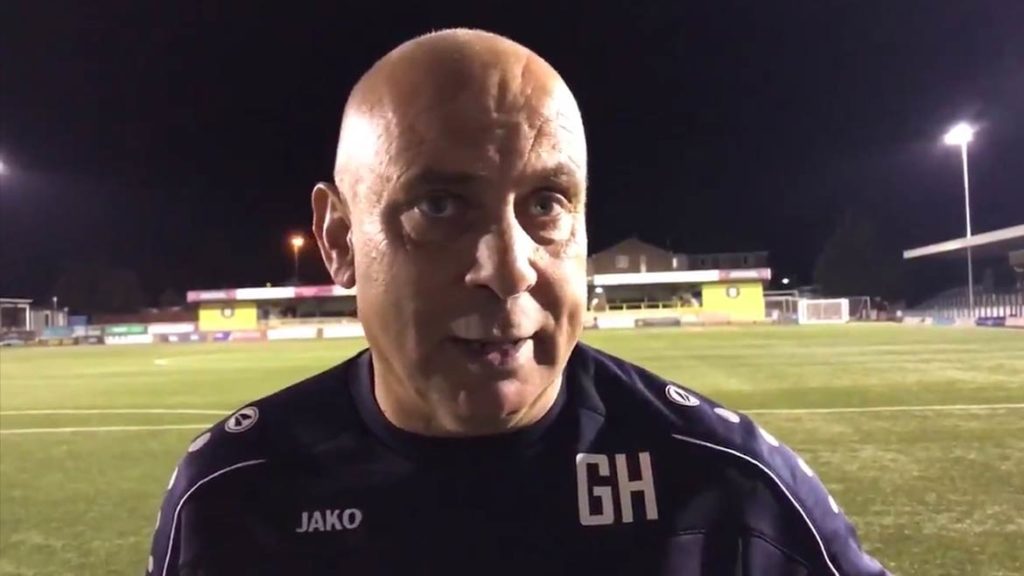 Fleet must get something from home clashes

Garry Hill is under no illusions that his side need to add points in their two upcoming home games, following a pair of defeats on the road.

“We’ve got two games at home and we know we’ve got to get something,” he told BBC Radio Kent’s Mark German. “The results today only help if you do your own job. There’s not much of a gap even though it’s not nice to be bottom.

“We’re frustrated. Where we are in the table, that doesn’t change. The other results today haven’t hurt us too bad and we’re coming into two home games.”

The Fleet manager felt his side were fortunate to be level after the opening 25 minutes but acknowledged Harrogate’s goals at crucial times, with Fleet starting to improve, were the difference.

“I felt we started slowly, they were the better team in the first 15/20 minutes,” he said. “We struggled with the tempo, we gave the ball away cheaply. But I thought we came through that to get a grip of the midfield and a grip on the overlaps from the full-backs. We were getting on top for a 10-minute period when Alex Reid had a very good shot and we were growing in confidence.

“I was looking at the watch and there were about five minutes to go and I thought we’re settling down well, 0-0 at half-time. All of a sudden they’ve got a ball which has been picked up from a header, Beck’s flicked it on and the boy’s taken his goal very well.

“It’s always a hard time to concede a goal but I couldn’t see it coming at that time. I could see it coming in the first 20 minutes, it didn’t come. I said to the lads we’ve got to win the second-half, show a bit of character and dig in. I thought we did. The first 15 minutes, we played some good football, we were certainly on top. We had two or three good, close efforts. Frankie Sutherland was only inches away from equalising. Sometimes that puts momentum on, gives you a big lift. We were growing in confidence, it was a good response from the first-half, we were looking after the ball better. Then all of a sudden a bit of a counterattack, it’s got a deflection off Jamie Grimes, then a deflection again and he’s headed it in.”

Hill felt his side kept plugging away and had little cause to fault their effort.

“That is the dividing line from being on top and inches away from scoring or equalising to have momentum,” he said. “A lot of teams would have folded after their second goal. You’re asking questions then about your players and I felt we carried on playing football the right way. We made one or two changes to get that goal. If you get one even with five minutes, like we did at Woking, it can change. I can’t knock the effort, the performance and the brand of football we try and play.”

Fleet were under strength with five players unavailable through various injuries and Hill is expecting a couple of them back over the next fortnight.

” It’s tough at the moment when you’ve five players who haven’t been involved today who are big players, experienced quality players which we’ll have hopefully in the next two or three weeks back in contention,” he said. “Two or three more will have to come in, two or three more move out. James Ball went yesterday, Nathan Ashmore to Boreham Wood.

“You’ve got Josh Umerah back on Tuesday. He’s had an injury on astroturf before so we can’t risk that. There’s brightness out there for sure with those [injured] players back and one or two additions.

“I think the back line at present even though Jamie Grimes isn’t a natural left-back, looks stronger and solid. Jordan Holmes has already become a big fan favourite, Tyler Cordner’s a very good player. Alex Reid has got three [goals] in six, we’ve fetched in Josh Payne.”

Payne grew into the game on his debut for the club and Hill is expecting much more across three months from the Crawley man.

“I think Josh Payne will get better and better,” he said. “His ball retention, experience, proven record at National League and above [makes] him a good signing for us. He will mastermind the middle of midfield and he will be a big player here.

“Gozie Ugwu did well up top and led the line well. There will be new signings coming in and it’s not been an easy summer for anybody but we’re coming out of it the right way. It doesn’t matter whether it’s me or anybody [else] in charge. I don’t fear that we’re way, way short. We are one or two results of confidence away and a bit of luck to win games and we’re going in the right direction.

“We’re not bad. I know people will say, well you’re bottom. There’s other clubs round us that people didn’t expect to be [down there]. I do believe with two home games coming up and if we play like we played against Barnet, that commitment, we can get some reward. I don’t think supporters who travelled up here today and on TV will say we were poor. They’ll say we’ve been unlucky a little bit.”

And the Fleet boss is refusing to throw in the towel after 15 games, convinced his side can win their battle.

“I’m confident and I love the battle,” he said. “Nobody is going to go out and do more to fetch players in any different from me at the present time. But that is always out of a manager’s hands. The supporters have been understanding. Our aim is having a football club and the owner has put a lot of money in, he’s fully committed, we’ve changed the structure. But the club, even though it’s hard, is becoming healthier after a long illness.”

Ed Miller has been Ebbsfleet United's communications manager and programme editor since 2014 and responsible for the club website since 2007. Contact him on ed.miller@eufc.co.uk
PrevPreviousHarrogate Town 2-0 Fleet
NextThe first goal’s key for usNext