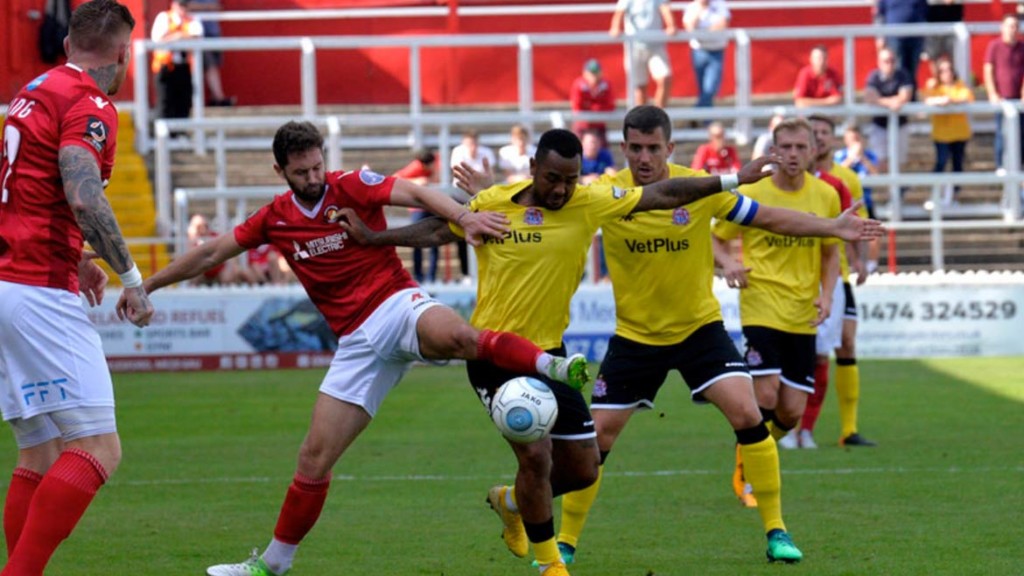 Garry Hill’s all set for his longest away trip with the Fleet so far coming right before a Christmas in which he didn’t expect to be on the road.

Having only been appointed in November, the Fleet manager might well have had other plans for the festive season but he insists he’s energised by the newest developments.

“I wasn’t expecting it, no,” he told eufc.co.uk. “But I’m pleased. I’m happy and excited about having this travelling and this opportunity in football in every way and form. That’s important to me,. As much as we all want a good family Christmas we want to enjoy our football, too! And I want to wish everybody connected with the football club, the supporters, everyone who works hard around here like the voluntary people who do a lot and might not get recognised for it, a very happy Christmas and prosperous New Year.”

Before that, however, is the small matter of Fleet’s now seemingly annual trip to the Fylde coast right before Christmas. Hill is boarding the train on Saturday morning with his players as they make a one-day sojourn to the north-west.

“We’re going up on the day,” he said. “I feel that with the last Friday before Christmas and now the schools have broken up, people going away, there’s a lot of traffic on the road and it could be an awkward one so we’re travelling up by train on Saturday morning and back after the game. Let the train take the strain!”

There’s certainly no strain in the Fleet camp despite the “tough and not particularly attractive” defeat to Dagenham, in Hill’s words, and the manager has had his scouting team report back to him about the threat from the Coasters.

“We have our own people who watch the games and feed back the tactics,” he said, “so we know enough about them to know it’s a tough one. But I think it’s one we’ll relish. I like these types of games. It’s a case of we’ll go there and be very positive. We’ll go to try to win the game. People will say a draw’s a good result, we can take a view on that at 5pm. But at 3pm we want to win it, there’s a lot of confidence. Don’t get me wrong, a draw will be a good return but as I’ve said before and when I first came in, you have to risk losing to win the game if your goal is to catch up on the points gap and get in contention in and around teams in the play-off area.”

Following the trip to Fylde, Fleet have their first Boxing Day “derby” featuring Braintree Town. For Hill, who has had the often feisty Woking v Aldershot derbies to contend with, it might seem a bit of a low-key festive fixture but he was having none of that suggestion.

“I’ll be honest, I don’t look at the games like that,” he said. “I’m looking at the points, whoever we play against. It’s tough whoever they are. If we can turn a certain number of points around out of 15 up to early January, that’s what I’m after. I’ve set my target in my own mind and it’s not to put players under pressure but if we’ve got aspirations of making a push in the second half of the season even though there’s a new structure and things have been reduced one way or another, then we’ve got to be very positive and see where it takes us. And we are very positive.

“When I look at AFC Fylde, two Braintree matches, then Eastleigh and Chesterfield, in my own mind I’m saying to myself we can turn round and gain a decent points total. It might be a tall order – you do get funny results at this time, maybe in some local derbies, but I’ve set us a target averaging two points a game and I’ll be very happy if we can meet that.”

Dave Winfield continues to progress and did some ball work last weekend and during this week of training but Hill will take a view on his likelihood to see any action towards the end of the festive games from his medical staff. “We’ve 18 players with everyone fit and we will rotate certain things as we can. The team we put out now is as strong as when I first came, even if we’re shorter on numbers. I don’t want to rush anyone back and hope we come out unscathed from these games.”

One extra player in the door was Freddy Moncur, who was given his chance at Leyton Orient when Fleet’s assistant manager Ian Hendon was in charge at Brisbane Road. Moncur played in pre-season with the Fleet and continued to train with the squad and Hill is open-minded about a long-term future between player and club.

“Freddy was  training at the club when I arrived and he’s done very very well in that time,” he said. “He’s not looked out of place, and is comfortable on the ball. He’s very likeable and lively. I understand he’s young and needs to be playing football regularly. We feel we can give him an opportunity for a period of time through January. We’ll see how he goes under our guidance and take a view between us and see where we are. I’m not just going to sign a player on a long contract for the sake of signing a player. He fits into the good atmosphere of the playing squad and staff. It’s an open-ended arrangement to see where we’re both going and we’ll go from there.”

Fleet’s second visit to Mill Farm is certainly a tough test on paper. AFC Fylde have only lost on home soil to leaders Leyton Orient and Salford City this season and as usual striker Danny Rowe is riding high in the scoring charts. The Coasters surprisingly lost at Dover in their last league outing but found their shooting boots in the FA Trophy to stick five past Stratford Town. They have won eight home league games this campaign and enjoy a five-point cushion in the play-offs. Last season, Dave Challinor’s side suffered from inconsistency yet still made the play-offs; this season, they seem to have eliminated any such problems. That was shown by the clinical 3-1 victory at the Kuflink Stadium earlier in the season.

Yet Fleet travelled to Mill Farm in a similar scenario last season, with Fylde banging in goals left, right and centre, yet the home side needed a late Rowe strike to prevent the visitors taking home all three points.

Since their win over the Fleet earlier in the season, the Coasters have lost Joe Cardle but brought in a trio of midfielders in Nick Haughton from Salford City and on loan Arthur Gnahoua from Shrewsbury Town and winger Danny Williams from Accrington Stanley.

Ed Miller has been Ebbsfleet United's communications manager and programme editor since 2014 and responsible for the club website since 2007. Contact him on ed.miller@eufc.co.uk
PrevPreviousBuy advance tickets for AFC Fylde game
NextAFC Fylde 2-0 FleetNext