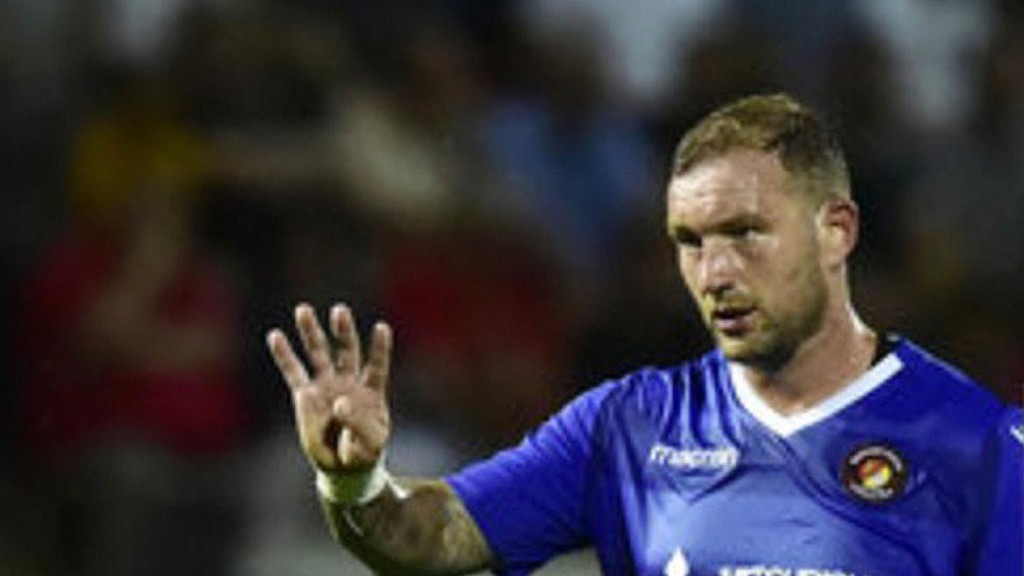 Danny Rowe continued his record of scoring every time he plays against the Fleet as he sealed a win for AFC Fylde to end the visitors’ unbeaten league run, writes Mark Halliday. Ebbsfleet gave it a good shot in a first-half where the Coasters took the lead somewhat against the run of play but they couldn’t quite find the extra gear needed to overhaul the home side after the restart, gifting Fylde the decisive second 10 minutes from time.

Dave Winfield’s return was one of two changes as he lined up alongside Jack King in the centre of defence, while Andy Drury also earned a start – with Lawrie Wilson and Michael Cheek the men making way. Chasing the coattails of leaders Leyton Orient and Salford City, the Coasters were keen to get at the Fleet and they had a spring in their step from the kick-off, forcing a couple of corners.

Five minutes in, Nathan Ashmore had to leap to touch Danny Rowe’s free-kick around the post as Fylde kept possession and restricted their visitors to forays on the counterattack, with Drury looking to distribute those to Bagasan Graham and Corey Whitely.

Ashmore was in action again on 12 minutes when former Salford City winger Nick Haughton nipped in ahead of a Fleet leg and tried to pick his spot to the goalkeeper’s left but couldn’t beat him. From the quarter-hour mark, Fleet began to step up their game and Graham twice attempted to lift crosses towards Danny Kedwell.

That signalled something of a purple patch for the blue shirts. Good work by Drury to find space on the edge of the box saw him arrow a ball towards the far post and Kedwell shot on the turn to force Jay Lynch to push behind. Chris Bush won another corner from that with a deflected effort and Drury directed another chance just off the target with his head from Ebou Adams’ searching ball in.

Fylde posted a warning on 25 minutes, however, when Shrewsbury loanee Arthur Gnahoua drove high of the crossbar. Three minutes later, the home side took the lead against the run of play when Andy Bond got room out wide as Fleet lost possession to deliver a cross into the box where Ryan Croasdale met it, sliding in behind Winfield to bundle it past Ashmore.

Graham drew a save from Lynch in Fleet’s next response and the Fylde goalkeeper was well behind Whitely’s 36th minute effort. Lynch continued to frustrate the visitors and he beat Winfield to a cross, punching clear under pressure from the Fleet skipper, while two Fylde defenders went in the book for a couple of hefty challenges.

Fleet were industrious and with plenty of creative approach play but found Lynch in good form when they did get the ball into the box. Fylde were allowed the final effort of the half, the impressive Haughton teeing up a shot from 18 yards that Ashmore kept tabs on as it skipped wide.

The home side never really allowed Fleet a toehold in the second half. Three minutes in Haughton slipped a pass into Gnahoua down the right and Ashmore had to save well once more. Gnahoua then turned creator as he set Rowe free with blue shirts appealing for offside and the Fylde top scorer’s cross was fortunately too much for Haughton to run on to.

Gnahoua and Haughton both sent efforts off target as Fleet, so effective at finding the room to play in the first-half, found the Coasters in no mood to let them back into the game. Ashmore had to watch as Haughton’s delivery deflected off a defender and bounced off the crossbar and he then saved astutely from Bond as Fylde set themselves to finding a second goal.

The visitors were always in it at 1-0, however, and Whitely’s shot into Lynch’s arms could have had done with more weight while Kedwell flicked on a high ball to Drury on 70 minutes but he was denied at the last by Neill Byrne.

Luke Burke responded by bustling through the Fleet defence and finding Rowe who was again denied by Ashmore’s quick reactions. But Rowe wasn’t to be denied for much longer as he capitalised on an error to wrap up the points for Fylde. A free-kick lofted from the back was met by Bush for a clearance but as he tried to launch it clear, he got the ball caught beneath him, it spun free to Rowe and the deadly marksman had space to convert for 2-0.

There was no way back from there for the Fleet and the last 15 minutes including time added on was uneventful save for Kedwell leaving the field late on with a cut head. It’s a headache the Fleet will nurse over Christmas and hope to bounce back with Braintree the visitors on Boxing Day.