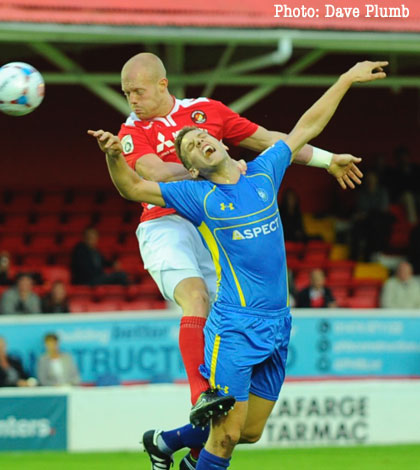 A season which began with considerable ambitions at home to Concord Rangers could hinge on victory or defeat against the same opposition this coming weekend.

“Too little, too late,” may be the refrain from fans – and indeed manager Jamie Day admitted his side’s play-off chances are fast vanishing over the horizon – but even the mathematical likelihood of a top-five finish will further disappear should Fleet fail to secure three points at the Aspect Arena on Saturday afternoon.

The capture of Luke Rooney from Luton Town was as much about taking a look at a player’s potential for next season as it was about bolstering Fleet’s supply from midfield in the final five weeks of the 2014/15 season, but Day will hope the former Gillingham and Swindon prospect can improve the flow of chances to his front men.

If Danny Kedwell, who got half an hour at Havant on his road to recovery, partners Adam Cunnington then it could mean a three-way fight between Rooney, Sean Shields and Matt Godden for the wide positions, depending of course on the formation Fleet approach the game with.

“In all honesty it’s for the other teams to throw away now,” Jamie Day said. “We need to win probably six of the seven just to give ourselves a chance. We are going to have to beat Concord, we are going to have to beat Whitehawk and then beat the rest of them. We had our chance last Saturday and didn’t take it. The boys had a bit of a rocket after Havant, they deserved it and now we need a response.”

In a frank interview with Charles Webster on BBC Radio Kent, the Fleet boss added, “The fans are going to react, of course. I don’t think it’s that our boys aren’t battling, they’re not gutless, we’re letting ourselves down in the final third. I can’t keep saying it but what I see in training isn’t happening enough on game day. In the week what I see is completely different to what I see on a Saturday. We’ve done OK in the last four or five games because we’ve only lost one but that’s not enough and we’ve not reached our capability. If some of these boys aren’t bringing what they’re capable of doing, then we have to change it and I have to sort that out.

“This club needs to be going forward and getting promoted. I have to do that, if I don’t then someone else will be given the chance. We can’t have players doing just enough, we have to have players who’ll do more than that. They are playing for their place next season, definitely. While it’s the case we’ve brought players in, if you play well you keep your place in the team, if you don’t then we have to give other people a chance. If they’re not reaching at least seven or eight out of 10 on a regular basis, then we have to change personnel.”

Anyone who thought Concord’s ultimately unsuccessful but promising play-off challenge of last season was a one-off will have had those opinions rammed back down their throats in recent months after the Beachboys quite remarkable 12-match unbeaten run in the league has brought them roaring back into contention.

A defeat at Stonebridge Road on the opening day of the season seemed like the beginning of an average season at best for the Essex side, with the club as low as 17th midway through 2014/15, but manager Danny Cowley has again applied his seeming Midas Touch and got his squad firing on all cylinders.

Concord’s last defeat, their only one this year, came on January 17 at St Albans City and they have since seen off Whitehawk at home, are the only team to have beaten Havant in 2015 (twice), and achieved away draws at Boreham Wood, Basingstoke and Whitehawk again. Not surprisingly they top the form table, are a point off fifth place and six points clear of the Fleet. And Cowley’s side are in good form on their own patch, lying third in the home table with only three defeats.

The contrast with last season couldn’t be more stark – by the time our two clubs met in the rearranged game, Concord’s play-off hopes were all but gone beneath the weight of a punishing fixture schedule while Fleet were on the cusp of ensuring a top-five finish. Now the boot is on the other foot with Concord, who were playing in the Essex Senior League only seven years ago, in with a shout of the fifth tier of English football. And while their next three games are potentially tricky, a final run-in of Staines Town, Hayes & Yeading and Farnborough certainly places the Essex side amongst the front runners for a play-off spot.

The core of the Beachboys’ squad is still very much in place from last season – with dominant Steve King and experienced Matt Fry at the back, danger man Sam Collins at the heart of midfield while Steve Cawley and Lewis Taaffe cause problems up front. To a settled spine, Cowley has added Jay Dowie from Boston United, re-signed striker Harry Elmes and loaned in Arsenal goalkeeper Josh Vickers.

Having recently welcomed back the long-term injured Leon Gordon and suspended former Dartford midfielder Alex Woodyard, the Beachboys have no fresh squad concerns.

Ed Miller has been Ebbsfleet United's communications manager and programme editor since 2014 and responsible for the club website since 2007. Contact him on ed.miller@eufc.co.uk
PrevPreviousRooney roars into the Fleet
NextConcord Rangers 1-0 FleetNext