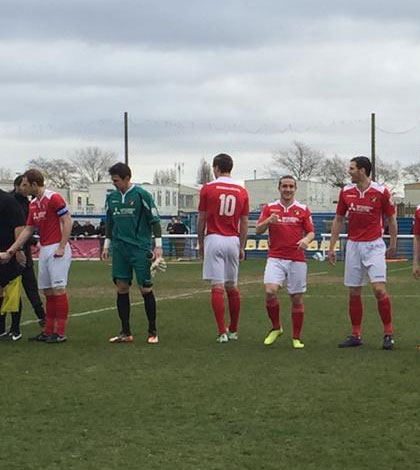 Concord Rangers maintained their unbeaten run and march to the play-offs while surely putting the final nail in Fleet’s coffin as an early free-kick was enough to give the home side three points.

Fleet started with Luke Rooney – Dean Rance dropping to the bench – while Matt Godden slotted in alongside Adam Cunnington. But the visitors had barely got into their stride before Concord were off the mark. A foul 20 yards out gave Taylor Miles the chance from a free kick and he cleared the Fleet wall from wide on the right and fired into the bottom corner before Brandon Hall could get across to cover.

With plenty of time to respond, Fleet remained measured in their approach but for all their possession football, failed to really trouble the Concord back line.

Rooney fed Stuart Lewis inside the box but the skipper could only stab at the ball. Concord lost striker Lewis Taaffe to an injury on 14 minutes before Kelvin Langmead saw his header from a corner hacked clear.

Fleet pushed the home side back and forced a couple of corners to keep the home defence on their toes but such was the lack of incisive play that an inadvertent Langmead clearance was probably the best move, finding Godden racing through before he was outmuscled.

Half chances came and went, Stuart Lewis getting behind the back line to force a clearance in the six-yard box before a Shields cross almost found Cunnington clear in the danger zone. Godden then saw his header cleared off the line in Fleet’s best chance before Miles ended the half for Concord with their first shot on target since the free-kick goal.

The second half was more of the same, Fleet in control and Concord getting plenty of men behind the ball, but the home side looked unlikely to buckle with their well-organised approach.

Joe Gardner should have done better for the home side with a shot scuffed wide when he got behind the Fleet defence before Jamie Day brought Alex Osborn and later Danny Kedwell on in a last-ditch attempt for a goal.

Cunnington flicked a header into Rooney’s path but the new man fired over before Cunnington himself lifted a shot just past the upright from a corner but creativity was in short supply and Concord held on without too much trouble.

Fleet, meanwhile, will soon be picking over a post-mortem of their season and looking ahead to the summer.

Ed Miller has been Ebbsfleet United's communications manager and programme editor since 2014 and responsible for the club website since 2007. Contact him on ed.miller@eufc.co.uk
PrevPreviousFleet aim to avoid Concord knockout
NextFleet see two departNext