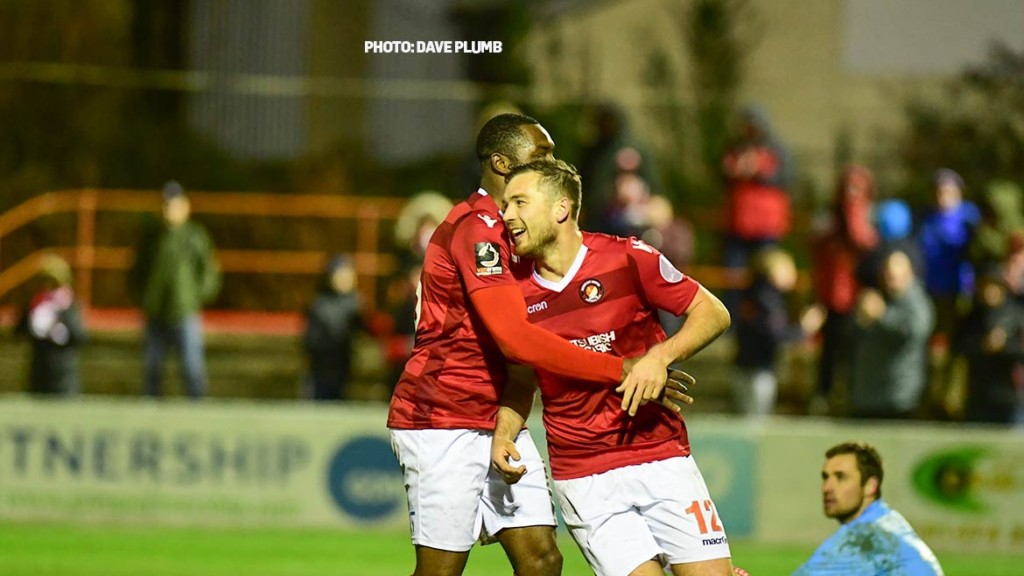 Goal-starved Fleet fans were treated to a virtuoso second-half performance as their side rattled in three goals against Maidenhead United to finally separate these two sides after three successive 1-1 draws.

Gozie Ugwu, back for his second spell at the club, provided two assists for Michael Cheek and was unfortunate not to get on the scoresheet himself as Fleet kept it tight at the back to record another clean sheet. And to add to those positives, there was also a league debut from the bench for Academy youngster Arif Omar while his manager Danny Kedwell was slotted in at centre-back for his 199th appearance for the club.

The second half blitz was unexpected after a tight first period where Fleet’s passing was slick but they still lacked a cutting edge.

Ugwu, who started in place of Kedwell, didn’t see the ball for the first 15 minutes as the two sides got to grips with a surface that certainly played better than expected after some atrocious weather.

Fleet had the edge but it was nip and tuck as Maidenhead looked dangerous when Adrian Clifton managed to stay onside.

Myles Weston skipped through the middle on seven minutes for the first shot on target but that was deflected just wide for a corner. Corey Whitely was lively in the final third and Jack Payne controlling the midfield and it was Payne who next warmed goalkeeper Carl Pentney’s gloves with a commendable effort from quite some distance with a free-kick.

Ebou Adams, desperate not to get booked as the cut-off point for 10 yellows approached, in fact drew two fouls that saw Maidenhead players cautioned – first Ryan Upward on 19 minutes and then Ryheem Sheckleford who let fly as Adams almost hit the hoardings by the touchline.

On 23 minutes, Cheek was first to a cross with his head that cannoned off Alan Massey and Whitely followed up with a shot that seemed to hit Ugwu inside the Maidenhead box.

But the visitors could have nosed in front on 27 minutes when Jack King, skipper for the night, was put on the back foot by a bad pass and then slipped as Harold Odametey surged into the box and was denied only by an outstretched leg as Ashmore closed down his near post.

Six minutes after that Payne showed good vision and close control to drop a pass onto the unmarked Cheek’s head and the striker directed an effort wide of Pentney but the goalkeeper managed to get hands on it.

The final 10 minutes of the half involved next to no action and it certainly didn’t bode well for the rest of the game but the second period certainly livened up.

Indeed Maidenhead could have taken the lead in the first few minutes after the restart as Fleet made a couple of unforced errors that Clifton and Upward attempted to finish and the home side had referee Savvas Yianni – who had another decent game at the Kuflink Stadium – to thank for spotting a foul inside the box.

That was as close as Maidenhead came, however, before the Fleet wrestled control of the game. On 52 minutes, Sheckleford got in a muddle controlling the ball and was chased down by Whitely who blocked his attempted clearance, raced on to the loose ball and slid a low shot wide of Pentney and over the line to immense cheers of relief around the Kuflink Stadium.

The confidence began to flow back and Fleet’s attacking play was suddenly bolder… especially so seven minutes later as the second goal arrived. Ugwu powered on to a ball forward and cleared the last defender before being upended as he took on Pentney. Cheek had raced alongside in support, however, and he was able to sweep the ball into an empty net.

Cheek could have had another when Bagasan Graham’s pace down the left created space but the cross was a poor one. Maidenhead, however, looked all but a spent force by then.

Nonetheless, they were allowed some encouragement as Fleet took their foot off the gas for a 10-minute spell and substitute Josh Kelly should have done better than hit the side netting after he raced on to a pass, rounded Ashmore but missed the target. Upward could have scored from a similar position as he slid into a low delivery from the left at the far post but he too fired off target.

Fleet wrapped it up with 10 minutes left, however, with a delightful move. From outside the box, Cheek fed Ugwu whose timing in holding off his marker was excellent and he waited for Cheek’s return run through a crowd of players, supplying the exchange pass for the former Dagenham striker to fire home his second goal of the evening and 12th of the season.

Ugwu could have had the goal his performance deserved four minutes later when again he powered through on the break, sprinted clear of a pursuing defender and kept his shot on target only for Pentney to touch it wide.

Fleet had time to introduce Freddy Moncur in midfield who harried and chased and almost supplied Cheek for a hat-trick, while Kedwell ended the match in defence (as he had done last time the two sides met) and Omar got six minutes valuable experience including time added on.

Ed Miller has been Ebbsfleet United's communications manager and programme editor since 2014 and responsible for the club website since 2007. Contact him on ed.miller@eufc.co.uk
PrevPreviousPREVIEW: Maidenhead United
NextStrikers satisfy Hill’s home truthsNext