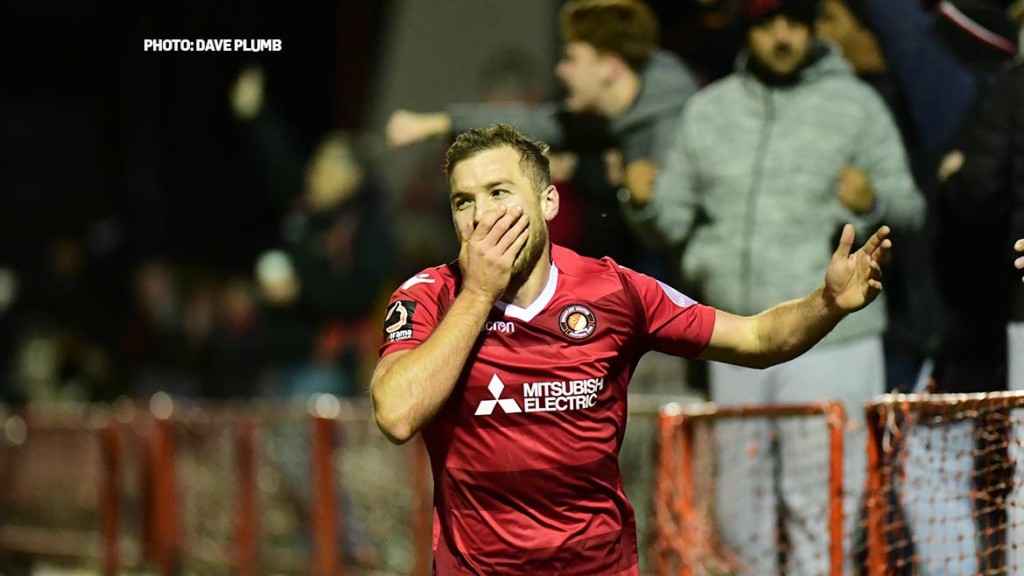 Garry Hill told his front men some home truths ahead of Tuesday night’s win over Maidenhead United and he was delighted they responded with three goals to leave behind the recent run of blanks.

“Over the last few games we haven’t created enough,” the Fleet boss told BBC Radio Kent’s Charles Webster. “I got into them early before the game tonight and gave them a few home truths that we haven’t done ourselves justice recently but tonight I’m very pleased.

“I thought overall we contained the first half quite well and it was important to get that first goal. From then on we were in command and it was nice to see some strong performances. The two boys up front, I think when they’re on their game they give us a little bit more mobility. They’re very strong physically and their presence was a handful and [Maidenhead] struggled to handle the front two. I thought Gozie Ugwu showed great strength, fetching people into play like Michael Cheek. You could see straight away they were looking a very good, mobile handful as a pair.

“I’ve probably seen more crosses go into their penalty area than what I’ve seen the last two or three home games. We went into the game very thin on bodies but we asked for a performance tonight of a team that had to show character and dig deep.”

And dig deep his side did with Lawrie Wilson bravely soldiering on through illness.

“The midfield boys worked hard and we’ve had one or two under the weather tonight,” Hill revealed. “Lawrie Wilson wouldn’t have been playing tonight if we’d have had enough bodies available. He was struggling with illness but he’s put his boots on and gone out there and done us really proud. Jack Payne was carrying around a leg injury for a long period. You saw Danny Kedwell drop in at centre-half, Freddy Moncur go on and it’s nice to get a 17-year-old [Arif Omar] involved. It’s always nice to get someone local and of a young age coming into the team, it gives everybody a great lift at the football club.”

Hill was pleased with Gozie Ugwu’s debut in his second spell at the club and believes enjoyment could be key to the Chesterfield striker’s return to form.

“He knows what I want him to do and he ticks all the boxes for me,” said the Fleet manager. “I saw a performance out there that I used to see on a regular basis [at Woking]. He enjoyed it, he’s been received very well. They’re a great set of lads, they’re very close in the changing room.”

And the Fleet boss refused to write off Danny Kedwell who came off the bench to play at centre-half, revealing that the experienced former Gills striker’s versatility could see him play in less familiar positions as he approaches his 200th game for the club.

“Danny Kedwell will still do a good job up top for us as well, so we mustn’t dismiss him out of the forward line,” said Hill. “He’s a big player and if we can get balls into the box, Danny Kedwell’s going to get on the end of them, like Gozie. Like Michael Cheek will.

“But I wouldn’t rule Danny Kedwell out of centre-half either. He’s experienced, he heads it, he kicks it. If you head it and kick it and you know positional sense and you’re experienced, don’t rule that one out for Saturday!”

Jack Payne took a knock on his leg during the second half but Hill said that’s one he’ll run the rule over in the days to come.

“We’ll have to see how he is, he’s kept going but [we have] Freddy Moncur, another young player. As a manager you do feel sorry for some of these boys who sit there and come to away games and don’t get the minutes but Freddy’s earned them minutes and I was pleased to see him out there tonight and one or two very good passes he put in. We’ll get everybody in on Thursday morning, have a roll call and see what we’ve got and go from there.”

And after some recent questionable refereeing performances at the Kuflink Stadium, Hill’s last word was for the match official, Savvas Yianni being no stranger to competent performances when in charge of Fleet matches in the past.

“You know he was a superb referee tonight because you didn’t see him blowing the whistle all the time,” said Hill. “I thought he let the game flow well. And that’s not just because we won the game 3-0. It wasn’t stop-start and the game both ways was played in the right fashion.”

Ed Miller has been Ebbsfleet United's communications manager and programme editor since 2014 and responsible for the club website since 2007. Contact him on ed.miller@eufc.co.uk
PrevPreviousFleet 3-0 Maidenhead United
NextJeff Stelling to take on four-nation march for Prostate CancerNext