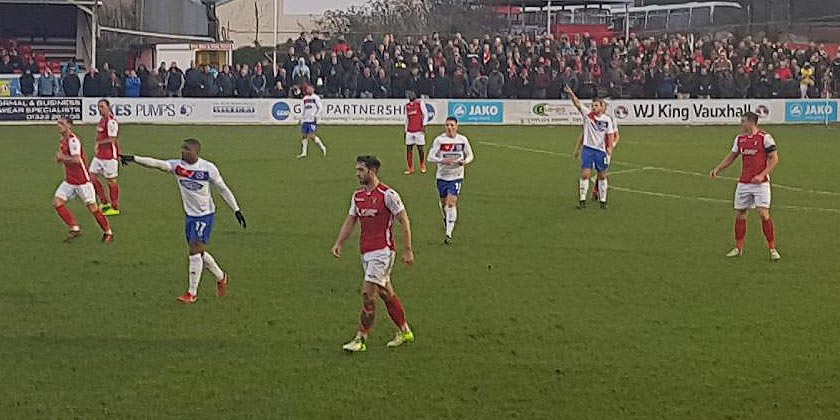 Fleet remained unbeaten in six games to see out a wonderful year in 2017 and but for a late Dagenham equaliser, it could have been six wins in a row at the Kuflink Stadium. The Daggers’ goal, however, was the least they deserved for putting the Fleet under the cosh in the second-half as they went in search of a response to Jack Powell’s first-half opener for the home side.

Marvin McCoy kept his place in the side after coming on at half-time on Boxing Day and that was the only change for the Fleet, with Bradley Bubb fit to take his place on the bench. Dagenham manager John Still rang the changes for his team, relegating top scorers Corey Whitely and Morgan Ferrier to the bench and dropping defender Scott Doe, with former Maidstone man Kevin Lokko returning in his place.

Whereas Fleet had often been second best during the first-half of the corresponding fixture back in August, they looked much more assured against this Dagenham side which is testament to the evolution of McMahon’s side since the early part of the season.  Luke Coulson had the first attempt on goal of an otherwise incident-free opening period but though he sprang beyond the Dagenham back line, it was an easy take for goalkeeper Mark Cousins.

The game went to and fro in terms of possession and Dagenham began to threaten, requiring McCoy to make a decent challenge on the floor as Sam Ling’s long throw-in caused problems in the home box. On 17 minutes, Fleet were relived to see the impressive Fejiri Okenabirhie roll a shot just wide after Dean Rance failed to get a clean connection to a clearance from 12 yards. Okenabirhie’s movement was at the heart of Dagenham’s forward play and he had a couple of further efforts on goal that weren’t unduly bothersome for Nathan Ashmore.

Coulson flicked a scissor kick just over the bar on 21 minutes from an excellent deep cross by Myles Weston but Fleet’s tendency to overplay their hand in the final third was frustrating their manager on the touchline who at one stage managed to unseat the gate from its hinges in exasperation! That all changed on 33 minutes when the home side enjoyed a decent little spell to open the scoring. Some attractive approach play saw a ball in from the left land at the feet of Danny Kedwell and though surrounded by players, he did what he does best and spun around to send a shot on target. It looked goalbound but came back off the foot of the post and with Cousins grounded, Powell was first on hand to send the ball over the line.

The ebb and flow nature of the game continued through to half-time with Dagenham being denied as Kenny Clark blocked a shot while Fleet had another chance courtesy of Coulson who sped down the left and opened up the defence for Powell but the goalscorer’s cheeky effort through Craig Robson’s legs was spotted by the goalkeeper who saved easily.

Dagenham had a reputation for attacking play and they certainly showed it after the restart, laying siege to the Fleet goal for much of the 45 minutes but their finishing let them down for much of that time. Andre Boucaud wasted a good build-up on 49 minutes by blasting the ball over the bar while Fleet were restricted to counterattacks. Coulson led one with fantastic vision to find Weston with a crossfield pass on 55 minutes but his cross into Kedwell was cleared. Fleet were almost in on goal again a few minutes later when Boucaud’s dreadful pass back to defence was straight to Kedwell who found Weston but his shot was turned behind for a corner.

Dagenham continued to threaten and they brought on the attacking trio of Corey Whitely, Mason Bloomfield and Morgan Ferrier as Fleet’s defence stuck manfully to their task despite plenty of pressure. Fleet’s introduction of Sean Shields on 64 minutes almost paid immediate dividends when he beat Jake Howells down the left, then Lokko, and jinked his way through the Daggers defence only to be halted in his tracks at the near post. With nine minutes left, Bubb came on as Fleet needed another outlet to dig themselves out of their defensive hole and his header down to Shields almost created an opening when the winger went down in the area but the protests were waved away by referee Carl Brook.

Still Dagenham pressed and Whitely fired a shot over but the goal they deserved arrived – rather fortuitously in the end – on 84 minutes. Buzzing around the Fleet box, a pass arrived at the feet of Matt Robinson and he drove the ball goalwards, a deflection off Bloomfield sending Ashmore the wrong way.

Both sides could still have won it as Shields and Kedwell showed some ambition to threaten the visitors’ back line and Bubb couldn’t quite control a ball into him. Andy Drury’s late free-kick was cleared out of the box while at the other end Fleet managed to survive a goalmouth scramble as the game ended all square.

Ed Miller has been Ebbsfleet United's communications manager and programme editor since 2014 and responsible for the club website since 2007. Contact him on ed.miller@eufc.co.uk
PrevPreviousFleet sharpen up the knives for Daggers visit
NextFleet’s GK coach offers fans new-year body goals planNext