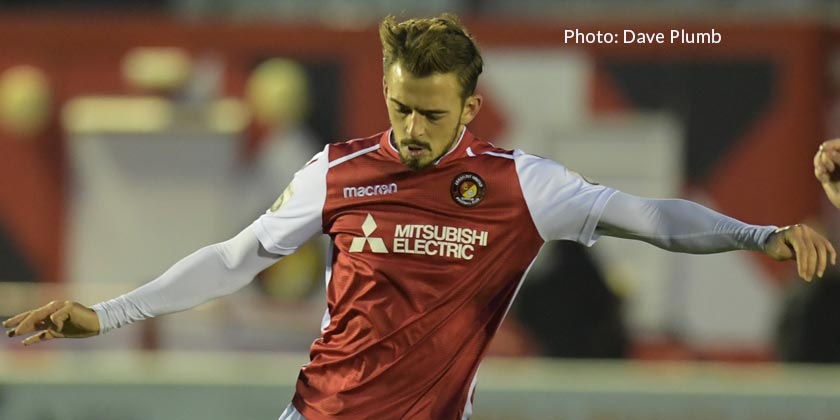 Fleet sharpen up the knives for Daggers visit

It’s game three of Fleet’s festive four up next at the Kuflink Stadium and having taken four points from six, Daryl McMahon is hoping to end a most satisfactory 2017 in style.

His side are second in the form table over the last four games and third across the last 10 matches; four league wins out of four at home have brought the Fleet to within two points of Saturday’s opponents, Dagenham & Redbridge, one of the pre-season favourites for automatic promotion. Danny Kedwell’s five goals in five games has launched him up the goalscorers’ charts but the players behind him are finding the net, too, with 24 league goals in all coming via just four players in Kedwell-Powell-Coulson-Weston this season.

Although Bradley Bubb and Jack Payne have been back in training in recent weeks, McMahon has been reluctant to alter his squad of 16 much over the past few games and may elect to give those players a little more recovery time while Fleet enjoy some decent form with a largely unchanged lineup. The only real question marks for Saturday are whether Marvin McCoy will keep his place in the back four having come on at half-time on Boxing Day and whether Sean Shields will get a start against his former club; otherwise Fleet will likely stick with the three central midfielders who did much to blunt Bromley’s attackers.

Dagenham have won three of their 13 trips on the road this season, though two of those have come since November with a lean period on their travels in the three months from mid-August. The last time Dagenham visited this corner of north Kent was in their Conference-winning season of 2006/07 when a goalless draw was fought out at Stonebridge Road, though they triumphed in three of their four previous visits.

And, like then, today’s Dagenham & Redbridge remain one of the top contenders in non-league football.

“They’re a very good side, John Still knows the league inside out, he’s been there for a few years,” said McMahon of the visitors. “We had a good game at their place, 3-3, when we were riddled with injuries at the time. Hopefully now we can be a bit stronger defensively and have that same attacking force. John’s had unbelievable experience and I’m nowhere near that. He’s forgotten more than I know probably. He’s a top man, he’s always there for advice when I worked at Dagenham for a little bit so I know him fairly well.”

Still has clinched the Conference/National League with Dagenham before and has also won titles with Luton Town and Maidstone United at this level and hopes were high that the Daggers might repeat that this season. Only eight points from top spot and with a game in hand, that very much remains a possibility for the Essex side in this season’s tight division, but Still and his players know a little more consistency will be required.

Dagenham were in decent form heading into Christmas, having won four games on the bounce, but their festive period has seen successive defeats at the hands of struggling Eastleigh and Leyton Orient. They will be coming to Kent determined to put their title ambitions back on track.

The Daggers showed much attacking prowess in our league clash back in August and in strikers Corey Whitely, Morgan Ferrier and Michael Cheek alone can boast 23 goals. All three have since been overtaken by Danny Kedwell’s red-hot recent form, however, and manager Still criticised his side’s lack of forward momentum on Boxing Day despite dominating possession.

Still has also recruited former Woking striker Chike Kandi who scored against the Fleet this time last year in the FA Trophy, while former Eastbourne frontman Elliot Romain has departed to Welling United on loan. Creative midfielder Dan Sparkes has also returned from injury since last we played while defender Bondz N’Gala will remain with Leyton Orient for another month on loan.