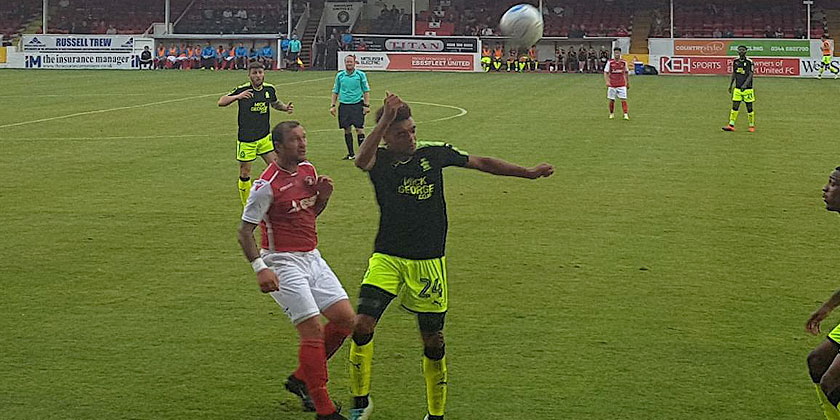 A much-improved second-half performance from a strong Cambridge United side earned them a win in this friendly, despite Fleet’s strong start and positive footing in the first half.

In a much-changed lineup from Saturday, much like the one he fielded at Tonbridge, Daryl McMahon chose to partner Kenny Clark and Yado Mambo in defence while Jonathan Miles started in goal and Danny Kedwell and Aaron McLean led the line. Bagasan Graham, meanwhile, also started at left back.

Cambridge started with nine of their regular squad members and two trialists but were second best for much of the opening half. Most of that was due to some excellent wide play and link-up between Graham and Luke Coulson. Saturday’s man of the match was into his stride as early as the second minute, robbing Leon Davies and rampaging through midfield before finding McLean to his right who was marshalled off the ball by the Cambridge defence.

Down the left, Graham was next to make an impression and he cut inside his marker to deliver a cross that was put out for a corner. He and Coulson combined well and another very well executed cross from Graham was diverted behind for another corner.

Not to be outdone, Shields on the other wing supplied a cross on to Kedwell’s feet and Dimitar Mitov pulled off a fine save low down as the Fleet No.9 let fly from eight yards.

When Cambridge did threaten, they were either very wasteful or their on-target efforts were well watched and handled by Miles in the Fleet goal. Luke Berry, a player being watched by plenty of clubs higher up the EFL, blazed one effort wide and wasted another free-kick.

Still Fleet continued to patrol the flanks to good effect and the impressive Graham showed some great crossing ability and set Kedwell up for another chance, a header at the far post that was high. Fleet’s best chance came on 20 minutes when Mitov got down well to Shields’ low drive and McLean could only pull the loose ball wide of the goal.

Mitov’s performance in the Cambridge goal was impressive but he needed two attempts to stop Jack Powell’s raking effort from 35 yards, and the Fleet midfielder struck an even sweeter effort four minutes before half-time that just curled away from the target as it cleared the Cambridge goalkeeper.

The second-half was a fairly pedestrian affair for the first 10 minutes, though the visitors – abandoning their first-half diamond formation – were clearly on the front foot. Marvin McCoy and Shields played a neat exchange of passes that Kedwell then fired goalwards but that was the last Fleet saw of the opposition goal for a while.

On 57 minutes, a long ball cleared Mambo and allowed Matt Foy space to run into; he was able to open his body up and wrong-foot Ashmore with a shot into the far corner for 1-0.

And Cambridge grabbed their second on 70 minutes, with a well-worked move down the Fleet left between Harrison Dunk and Jevani Brown that ended with a pass from the corner of the box to Adam McGurk and he fired home from a similar position to Foy’s opener.

Fleet could have got back into it 15 minutes from time when substitute Darren McQueen got a little space in behind the back line but was felled by a fairly robust challenge from Dunk. Kedwell stepped up with his second penalty of pre-season but Mitov was in fine form and dived the correct way to keep the ball out. McQueen continued to persist up front and his pace proved troublesome as he sent one shot just across the face of goal and set up Danny Mills with another effort but the former Whitehawk striker’s header lacked power.

Fleet look ahead to potentially even better opposition on Saturday when Southend come calling but the boss will be pleased with the workout offered by a Cambridge first team that didn’t have it all their own way.

Ed Miller has been Ebbsfleet United's communications manager and programme editor since 2014 and responsible for the club website since 2007. Contact him on ed.miller@eufc.co.uk
PrevPreviousINTERVIEW | Peter Varney praises commitment of club from owner all the way down…
NextFleet on track and on plan, says managerNext