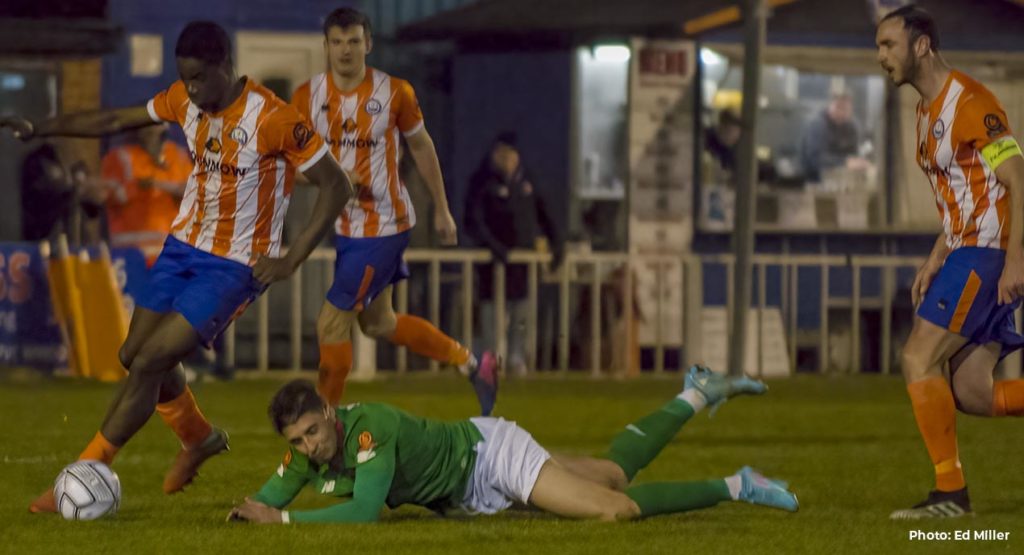 Braintree’s recent penchant for a 1-0 win was realised once more as they found a winner two minutes from time to send the Fleet away pointless in an untidy 100 minutes of football. Dennis Kutrieb summed up the performance after the match by saying, “We played their game and not our game and to get a result, they have to play our game. We knew what would come here and you need to score a goal because if you don’t, you have problems.”

Fleet needed to be alert from kick-off when an errant pass let Shae Hutchinson advance into the box before he was blocked off. There was a clearer cut opportunity for the Fleet on four minutes when Ben Chapman cleared his lines to release Lee Martin down the right and after cutting inside his man, the skipper hit a good shot that Billy Johnson had to tip over.

Martin won a corner moments later with another quick shot from the middle of the box and Fleet weren’t far off converting that at the far post as it zipped across the Iron goal.

But Braintree’s massed defence is a well-worn weapon in their arsenal and they succeeded in shutting Fleet out for long spells, fashioning a good chance of their own on 13 minutes when a corner clipped the top of the visitors’ bar and then from another such set-piece, Hutchinson sent a decent effort into Louie Moulden’s arms.

Encouraged by that, Braintree had the best opening on 16 minutes when Jean-Baptiste Fischer danced his way through the defence as the home side broke and only for a great block by Moulden from Luke Holness, the Iron would have found themselves a goal to the good. And with Braintree still encamped in the Fleet box with the next attack, Chapman had to sweep a clearance out of the six-yard area as the visitors momentarily found themselves under pressure.

Fleet were having most joy down the right and another good link-up between Lee Martin in the box and Chapman running alongside it on 20 minutes brought another block from the Braintree defence. Chapman turned supplier two minutes later, a fine and pacy cross from the byline speeding towards Poleon who couldn’t quite connect with it on the line as it flew past him.

Braintree’s pace on the counter was most apparent when Hutchinson raced beyond the Fleet’s back line on 25 minutes but Wood was back swiftly to cover, the home player falling over his foot in the process and eliciting strong penalty appeals, the referee impassive to them.

Wood and then Paxman both had shots at the other end that were a whisker away from converting, the Fleet fans behind Johnson’s goal in early celebration before the goalkeeper pulled off great saves to send both the wrong side of the post.

The final 15 minutes of the half was frustrating as Fleet’s distribution needed some fine-tuning but the visitors should have led at the interval with their best chance when Poleon won a free-kick on the edge of the box. Wood curled it in and it bounced back off the bar to the waiting Sido Jombati who placed it wide of the target.

And there was still time for a Fischer free-kick at the other end to cause some anxiety, Chapman forced to clear just in front of his line once more as a header was won by the physical Braintree front runners.

The second half began with plenty of huff and puff but misplaced passes and generally scrappy exchanges did little for the game as a spectacle. The biggest talking point came on 58 minutes when Chapman’s challenge on Jay Porter in front of the Braintree dugout rather over-excited the home bench and after a minor melee, the Fleet’s utility man was booked. Referee Aaron Farmer consulted his assistants but neither saw fit to punish the reaction of the Braintree bench.

That moment led to a more feisty passage of play but little uptick in decisive football and Braintree were encouraged by Fleet passes that they were able to intercept, gaining in confidence as they got more men forward in and around the visitors’ box.

Chapman sent a free-kick over the wall but it fell kindly for Billy Johnson 10 minutes from the end and Fleet’s No.22 covered plenty of grass to get back to the other end of the pitch to stop Ilic in his tracks on the break.

Moulden wasn’t called into action much but had to stretch well when Fischer’s free-kick was diverted by a Fleet foot towards the bottom corner but the goalkeeper received a boot to the face for his brave efforts, requiring several minutes’ treatment and a new shirt.

The overall scrappiness didn’t end there and the second-half was a thoroughly disjointed affair, the ticking clock helped on its way by players going to ground and fouls from both sides. Neither set of fans appeared happy with Mr Farmer’s decisions, home supporters calling for another penalty and a red card when Chapman was warned for persistent infringement while visiting fans were increasingly exasperated by some blatant gamesmanship.

Braintree got the breakthrough on 88 minutes, however, with tireless front runner Fischer robbing substitute Adam Mekki of possession and laying it off, into the path of Stefan Ilic. It was an excellent pass that ran in between the Fleet defence and Moulden at a perfect pace for Ilic to run on to and fire beyond the goalkeeper and into the bottom corner.

The referee added nine minutes of time and then a further three as Braintree’s injuries mounted and the ball disappeared down the touchline when out of play but Fleet, who were left to play with 10 men when Monlouis hobbled off, couldn’t find the final ball or clean pass to trouble Johnson.

Ed Miller has been Ebbsfleet United's communications manager and programme editor since 2014 and responsible for the club website since 2007. Contact him on ed.miller@eufc.co.uk
PrevPreviousPreview: Braintree bank on one on ones
NextPost-match reaction: BraintreeNext