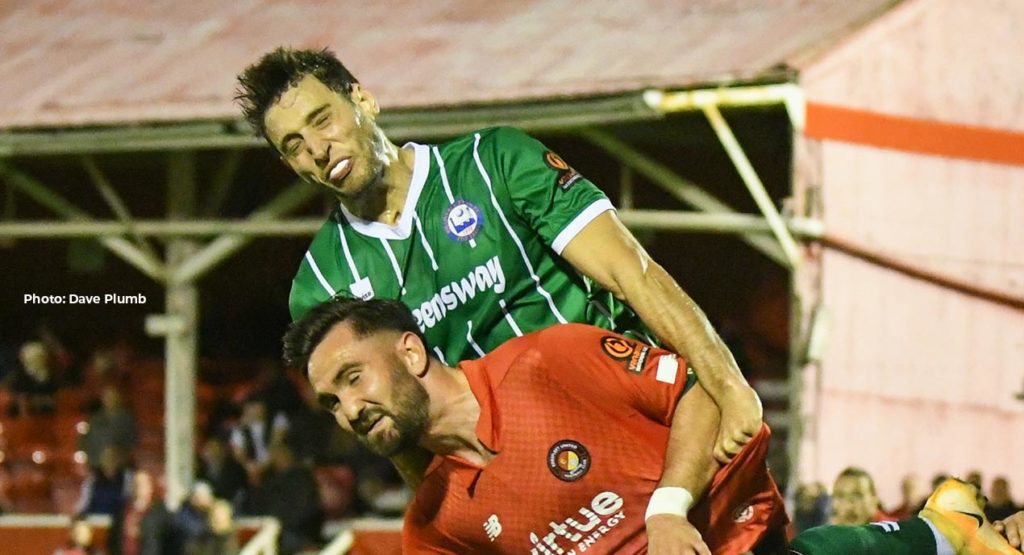 Preview: Braintree bank on one on ones

Accumulator and prediction-league fans need only take a look at Braintree’s last six games to make an educated guess on the outcome, with the odds suggesting tonight’s scoreline will be 1-0 one way or the other. And, while a 1-0 win would suit the Fleet, it would certainly be in the visitors’ interests to register more than a single goal to end the ‘1-0’ sequence of Braintree results.

“It’s a tough place to go and you can see other teams who are really strong who have struggled big time there,” said Dennis Kutrieb. “I know about their form – so they had in the last seven games four wins 1-0, two defeats 1-0 and a 0-0 draw so that’s outstanding form and we need to be up for it. We need to recover quickly, have a look at the boys who hadn’t played Saturday and who’s available for Tuesday and see who maybe picked up something from today.”

There were returns from the bench for Joe Martin and Rakish Bingham on Saturday, bolstering Kutrieb’s squad numbers for tonight’s clash at Cressing Road. And the Fleet boss will need to make a call about who has the freshest legs as he expects a totally different type of game in Essex.

Anyone who witnessed the home game against Braintree in the autumn will know how tough they were to break down – and that was when their form was poor and they sat bottom of the table. Now, Ryan Maxwell’s side have done most of the hard work in avoiding what previously seemed inevitable relegation. The four 1-0 wins since February have lifted the Iron into 16th place, nine points clear of the bottom.

Three of those four wins have come on home soil and since Christmas they have also frustrated the likes of Dartford and Eastbourne Borough by holding them to a single point each. And they also held Maidstone until the 83rd minute at the Gallagher Stadium more recently, so the indication for the Fleet is that patience and discipline will be key to unlocking the home defence.

It took a penalty and a moment of magic between Bingham and Dominic Poleon to see off Braintree at the Kuflink Stadium earlier in the season and the return of Bingham – who scored twice at Braintree last season – to the matchday squad is undoubtedly welcome as the season enters its final quarter.

That defeat earlier in the season clearly still weighs heavily on boss Maxwell who said ahead of tonight: “We certainly have a score to settle with Ebbsfleet having been cheated out of two clear penalties by the officials on the night when we certainly deserved a draw at least.”

As the home side’s spate of 1-0 results suggests, goals are not plentiful at Braintree with their total the second lowest in the division, but the close nature of recent games is clearly working in their favour. Goals tend to come from midfield with top scorer being Luke Holness on eight, while former Fleet midfielder Matt Johnson and ex-Welling man Stefan Ilic have three apiece.

This will be the Fleet’s 12th visit to Braintree since 1992 and a draw is a rarity, with seven wins, one draw and three defeats the complete record.

Admission tonight is pay on the gate by cash or card, there are no online sales.

Ed Miller has been Ebbsfleet United's communications manager and programme editor since 2014 and responsible for the club website since 2007. Contact him on ed.miller@eufc.co.uk
PrevPreviousMonlouis makes case for momentum
NextBraintree Town 1-0 FleetNext