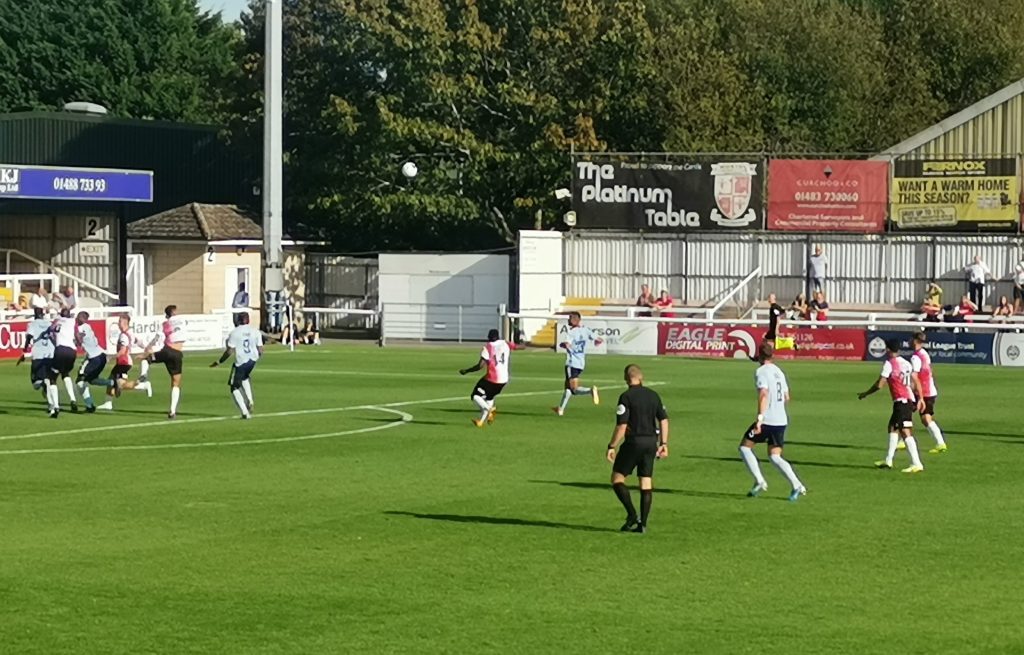 Fleet secured one of their most important and surely most unlikely points of the season as they came back from the dead, two goals down with seven minutes on the clock.

Woking missed a penalty after a dominant first-half but when they added a second goal 20 minutes from time, the visitors should have been dead and buried. But with just one defeat in six now, Garry Hill’s men refused to read the script.

Fleet made one change, with John Goddard’s return at the expense of another ex-Woking player, Aswad Thomas. Woking, top of the table, were able to name an unchanged side that included former National South nemesis Dave Tarpey.

On a hot, sunny afternoon Fleet started brightly and held their own against a mobile Woking midfield initially. Myles Weston and Lawrie Wilson deployed either side of Tyler Cordner and Jack King with Ayo Obileye just ahead of them but the home side soon began to exert pressure on that setup.

After winning their first corner, the Cards started to turn the screw and Fleet’s gameplan was ruined within eight minutes. King and Wilson were unable to clear the ball upfield and Tyreke Johnson picked up the loose ball and let fly with a rocket from 30 yards that flew at pace past the outstretched arms of Jordan Holmes for the opener.

That goal sent confidence coursing through the hosts and energised by Tarpey and Kane Ferdinand in midfield, they set about the Fleet with determination. Holmes made an excellent save, tipping over Tarpey’s dipping shot after the ex-Maidenhead man left Weston for dead.

Fleet were restricted to the odd foray upfield and Alex Reid fired just wide after Cordner provided some time on the ball and vision for a pass. James Ball had a couple of sights of goal but nothing that troubled goalkeeper Craig Ross.

Instead the excellent Holmes was called into action again on 26 minutes, getting a strong wrist on a goalbound shot from a Tarpey free-kick into the box.

Weston was booked for hauling down Tarpey and Fleet then switched to a 3-5-2, Obileye tucking in at the back and Wilson and Weston able to venture further forward.

That allowed Fleet a little more possession, with Cordner shackling Tarpey and Weston injecting a little threat. His shot from distance on 37 minutes wasn’t too far off and Fleet succeeded in blunting the Woking edge somewhat as the break approached.

That small improvement served as the platform for Fleet to build a much more effective head of steam in the second half. Gozie Ugwu replaced Goddard after the break and with two up top, Fleet gave the previously relaxed Woking defence much more to think about.

But the Cards could have taken full advantage only four minutes into the second half when a ball upfield found goalscorer Johnson and Holmes had little choice but to advance, upending the Woking player in the process.

With the goalkeeper facing the fifth penalty of his short Fleet career, Jake Hyde stepped up and clattered the ball off the crossbar.

That show of divine intervention served to fire Fleet to new heights and for the next 20 minutes they got the ball forward, won the midfield battles and frustrated Woking, whose passing grew more ragged in comparison to their first-half exhibition.

Ben Gerring was booked for a foul on Umerah as Fleet begin to win free-kicks in and around the home box. Weston showed skill and determination to thread his way between Woking defenders to find Reid out left and his cross was glanced wide by Umerah as the visitors carved out their best chance of the game.

Sutherland sized up another free-kick on the hour mark, firing that on target and Ross had to get down low to push it away. Woking were by no means a spent force up front, however, with Tarpey always busy down the right channel and his corner for Moussa Diarra was powered just over the crossbar.

The game continued to ebb and flow and Umerah tried to dig the ball out on the edge of the box but could only hit fresh air as he swung to connect with Woking defenders swarming around him. But from that chance, the home side raced clear on the break, Tarpey cutting inside to draw another fine save from Holmes.

But as Fleet pressed for the equaliser, Woking produced a sucker punch. Umerah had a good case to appeal as he was pushed by Manny Parry in the corner of the box but the referee waved that away and Tarpey raced away on the counterattack. His pass was cut out but then inadvertently helped into the path of Hyde who had the simplest task of planting it in the back of the net.

That should have been that as Hill sent on Alfie Egan and Alex Lawless and Woking found a new lease of life, carving out a couple of chances that could have seen them out of sight.

Egan was busy in the tackle and he helped create Fleet’s lifeline on 83 minutes as Ugwu then helped a pass wide into Wilson’s path. There was a case for Wilson to go for goal but instead he delivered a low pass into the six-yard box and just as he had against Eastleigh, Reid slid in to finish past Ross.

With five minutes of time added, Fleet mustered one last hurrah, winning a free-kick 20 yards out. Cordner looked interested in trying his luck but Weston’s short run-up resulted in an excellent curling effort that deceived Ross for the most unlikely of equalisers.

Both sides had chances in the remaining minutes, Holmes having to dive on a Tarpey free-kick before Umerah got round the back and almost fired beyond Ross before Woking cleared.

Fleet may have returned to the foot of the table due to other results but this one felt like a win and Hill will be certain to want to use it as a turning point in the club’s season with two home games to come.

Ed Miller has been Ebbsfleet United's communications manager and programme editor since 2014 and responsible for the club website since 2007. Contact him on ed.miller@eufc.co.uk
PrevPreviousHill looks to mark his Cards
NextGo and win the second half!Next