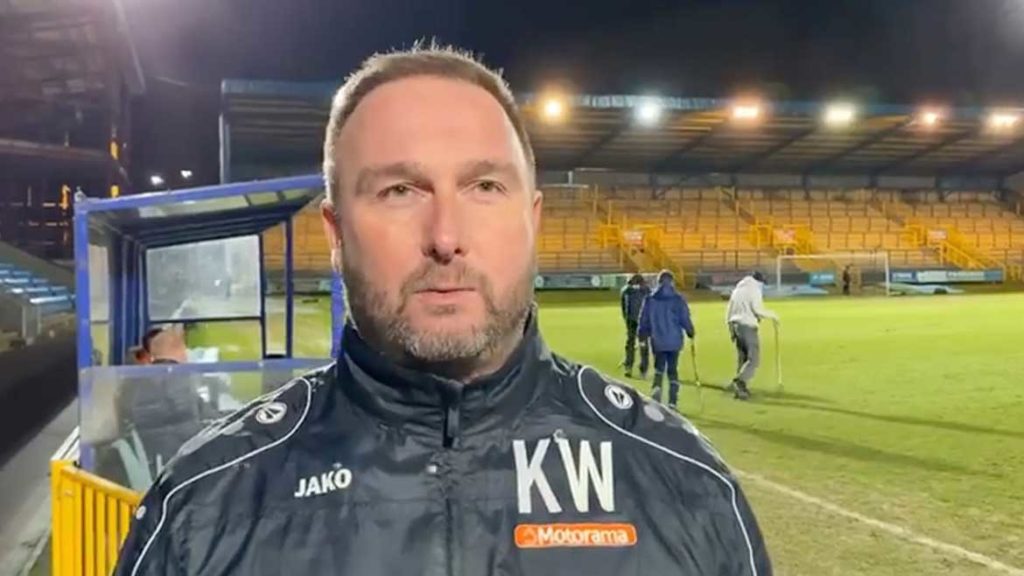 There may be bigger issues than football on the horizon but Kevin Watson can’t do anything about those and he kept his post-match comments to what he could control – events on the pitch.

And those went Fleet’s way once more as a fifth win in eight games put Watson’s side third in the form table – a statistic few National League observers would have put money on.

“All credit has to go to these boys,” Watson told BBC Radio Kent’s Charles Webster. “We set them up, we do our homework, we watch videos and clips, we work out how to play. What I would say is we’ve found a system.

“We tinkered with a lot of systems just trying to get results the previous 20-odd games. We’d get a good performance, then we’d get a bit of an iffy one and then that would change and force us to try something else.

“I think 3-5-2, I’ve always said is my favourite formation. It allows you to have three midfielders and to keep two forwards at the top of the pitch. You might end up losing a bit of ground in wide areas if teams play 4-4-2 or 4-3-3 but we’ve worked on how to combat that and I think today we were excellent.”

Preparedness has been one of Watson’s key tools going into games but his plans were dealt a blow with the national coronavirus crisis affecting even those this week.

“We prepared correctly,  as well as we could have done,” he said. “We were hanging the last 10 minutes but we’ve not trained since Tuesday because of issues and various circumstances with the training ground. We also tried to get somewhere else to train on the way up but because of the virus, two places – academies – have been shut down so we’ve gone from Tuesday without training.

“The fitness levels when you think about it, if they looked like they were out on their feet the last 10 minutes, they were.”

As to the game, Watson was hampered by a lack of bodies and then dealt a further blow when he was forced into using one of his substitutes within a quarter of an hour after the injury to Josh Umerah – though that had unintended bonus consequences.

“Tomi Adeloye seems to do all his best work coming off the bench, doesn’t matter if it’s after 70 minutes or 7 minutes,” said the manager. “I feel sorry for Josh because he’d started brightly and hit the post. In fact that was a really good save and should have been a corner but that’s by the by. Tomi’s come on, robbed the centre-half, a lovely little cross and Gozie’s finish was outstanding.

“We had a thin bench with two goalkeepers on there. I’m trying to keep everyone together. If we’d had everyone available I’d have wanted everyone to travel. That’s the group I’ve got, we’re all in it together. I made a statement when I took over I would get Ebbsfleet out of the relegation zone and keep us up and we’re going a long way to doing that with seven games to go.”

When games might happen is the big question hanging over not just the National League but the whole of world football. Watson can’t influence that but he and his side have done the next best thing lately – and that’s win the games they can play.

“Everything looks like it’ll be in suspension,” he said. “The National League decided we play today. What happens going forward I don’t know. It might not be down to the National League in the end, it might be down to government decisions so we’ll have to wait and see. We certainly don’t want it to end now with the form we’re in but what will be, will be. That’s life.

“Going into any break, whatever sort of break it is – whether you haven’t got a game for 10 days or an enforced break like this which is obviously unprecedented – it’s always good to finish on a win and we’ve finished on back-to-back wins at two very difficult places. I said to the lads I like it when we bust people’s coupons and that includes my old mates as well.”

Ed Miller has been Ebbsfleet United's communications manager and programme editor since 2014 and responsible for the club website since 2007. Contact him on ed.miller@eufc.co.uk
PrevPreviousFC Halifax Town 0-1 Fleet
Next‘Sitting duck’ Wilson plays through the painNext