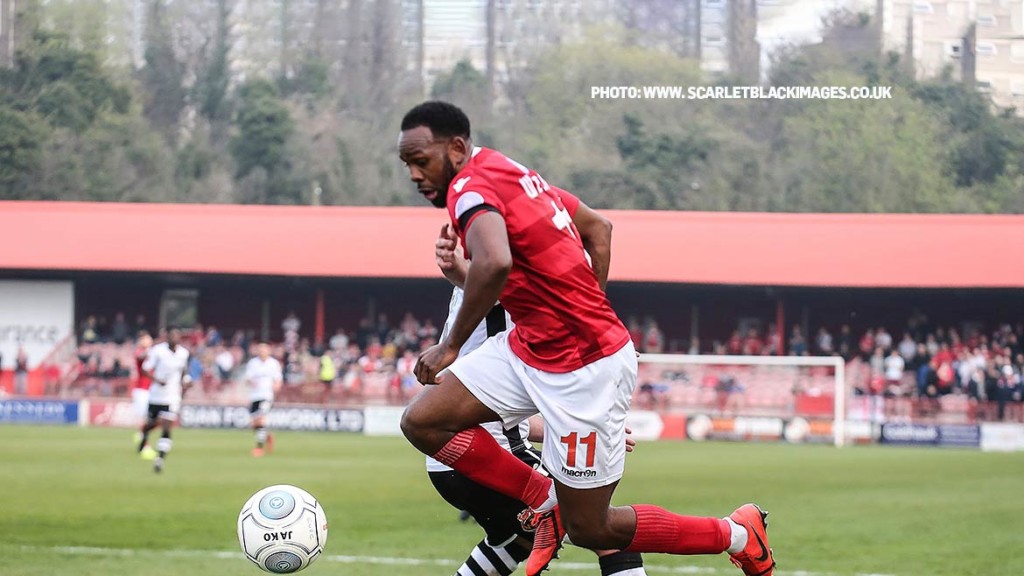 Weston: with the fans behind us, we keep going

Fresh from terrorising the Wrexham defence from his left-wing berth, Myles Weston declared he was pleased to “give something back” to the fans for their backing.

Weston, whose cross was deflected over the line by Wrexham skipper Shaun Pearson for the opening goal, has been in a rich vein of form lately and he’s spurred on by the Fleet support.

“The fans have been brilliant since I’ve come here,” he said. “It’s my second year and every week they’re brilliant. At the home games, the away games, they help us to keep going because they’ve been supporting us every game. So it’s good to give back. I’m happy that we give back to them. I’m happy that we had a good performance and got a win at home so everyone could see that we’re not here to play around.

“We want to get in the play-offs. [The fans] spur us on, every game they give us full support and it’s brilliant. That helps us – if it wasn’t for them then I think it probably would be different, but because we know the fans are behind us, it keeps us going.”

Talk of play-offs is rife once more following Harrogate’s recent shedding of points and while Weston’s not making any promises about this season’s play-offs – having scored in the semi-final last year – he’s determined that Fleet will do their level best to be there.

“I’m not going to say we’re going to definitely get there but we’re going to do our best,” he declared. “We’ve got a great chance and if we can continue to play like we played today, I feel we’ve got a great chance in getting in the play-offs. That’s all we’ve got to do, the best we can every game. We’ve got five games. That’s the aim. We’re going to do the best job we can and it’s all about consistency and momentum. Right now we’re on a good run so I hope we keep playing well and keep doing it.”

Weston’s assist for the opening goal set the Fleet on their way and he was unfortunate not to convert a chance late in the first-half that would have put the home side 4-0 up against their high-flying opponents.

“I just want to enjoy playing football and any time I’m picked to start, I’m going to do the best I can for the team,” he said, speaking of his contribution to the victory. “That’s been me in my whole career and I’m for the team. I want to do the best I can whether that’s getting assists, whether I score, work hard, that’s just in me. So I’m happy I contributed to get an assist for the goal. And I’m happy that we won. It was an amazing performance. You can see after the game that all the boys were together, walking around and clapping everyone.

“I’d rather just talk about the game but also the character of the boys: every day, it’s good. We’re all together. Everyone from the subs to those starting, everyone’s been amazing today and that’s what we should focus on.

Ed Miller has been Ebbsfleet United's communications manager and programme editor since 2014 and responsible for the club website since 2007. Contact him on ed.miller@eufc.co.uk
PrevPreviousWe’ll always give it our best, says King
NextPREVIEW: GatesheadNext