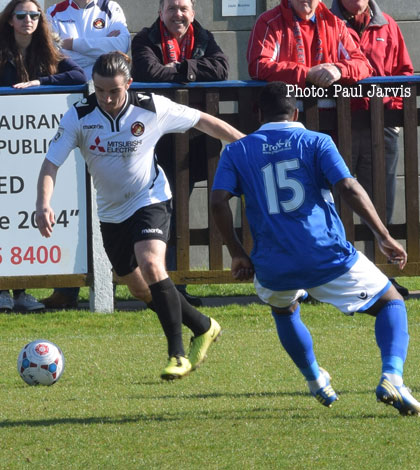 Fleet made it two wins and two clean sheets in succession as they kept their season going and their play-off ambitions still mathematically within reach.

Jamie Day made one enforced change with Anthony Acheampong replacing the injured Kelvin Langmead and neither side got off to a particularly flying start.

Nonetheless, Fleet scored the only goal of the game on 18 minutes – or rather Wealdstone did – as Luke Rooney’s fairly untroublesome free-kick into the box was inadvertently headed back towards his own goal by defender Elliot Godfrey and then looped over goalkeeper Jonathan North.

Fleet forced North into two more saves and were largely unthreatened at the back by Wealdstone’s main hope, former loanee Jefferson Louis.

Matt Godden’s break upfield could have produced more when he released Danny Kedwell inside the box but the Fleet No.9 was a little wide and though he lured the goalkeeper out of his six-yard box, his resulting shot went into the side netting.

Rooney then flung in a free-kick from the left that Godden rose to head against the post before Adam Cunnington’s fired a shot through a group of players that North did well to parry as he must have seen it late.

The home side didn’t create much in the second half either and Fleet could have extended their lead shortly after the restart when a move begun by Rooney saw the ball fall to Theo Lewis 20 yards out but his shot flew narrowly wide.

Events turned a little antagonistic on 68 minutes when Louis and Matt Fish became involved in a tussle as they both chased a ball and the big Stones striker led with his arm into Fish’s face, resulting in a red card for the home player. Added to that was an incident involving Brandon Hall and a section of the home support, which further annoyed a vociferous home crowd.

Fleet continued to knock it around well and play the better football without creating too many more chances, though Theo Lewis tested North with a shot while Hall remained without an awful lot to do as the clock ticked down.

Fleet still have it all to do to even get within sight of the current contenders for fifth place but with a game against the league leaders next Saturday, there is certainly some added impetus to a season that could have fizzled out by now but for this Easter weekend’s results.