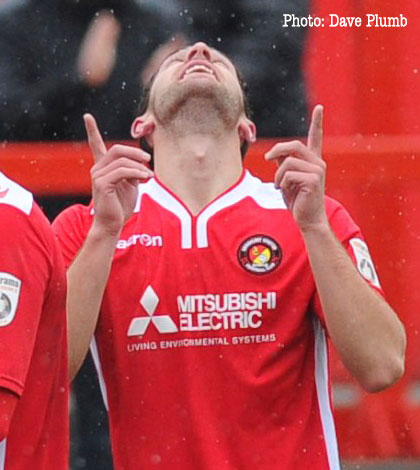 You have to feel for Matt Godden a little. Having scored a hat-trick against Hythe Town in the FA Cup, he was upstaged by Karn Miller-Neave’s free-kick and today, having notched a brace in Fleet’s win over Whitehawk, the headlines were once again swept from under him as Michael West scored a goal with virtually his first touch after a year out of the game.

West was named on the substitute’s bench but another long-term absentee earned a starting place, Aiden Palmer back in place of Ben Jefford. Danny Kedwell was also back in the 11, with Sean Shields making way for him.

The Hawks began confidently and Brandon Hall was kept extremely busy in the opening period. Jake Robinson finished off a great move down the right to fire low against the Fleet keeper. Three minutes later Hall was left somewhat high and dry by his defence as Danny Mills raced down the left in a Whitehawk counterattack and as the home defence failed to put in a challenge, he cut inside and bore down goal, his shot going beneath Hall who somehow managed to prevent it rolling past him.

Fleet cleared upfield immediately and a ball over the top found Godden racing through and he was felled in the box by Pa Saikou Kujabi but neither referee nor linesman was interested to the fury of home fans.

Robinson tested Hall again as Fleet failed to deal with Whitehawk’s movement in the final third but the home side went ahead against the run of play on the quarter-hour mark. Luke Rooney fed Godden with a ball through the middle. He slipped it to Cunnington who turned outside his defender and exchanged a final ball with Godden who managed to lift the ball over goalkeeper Craig Ross to give Fleet the lead. 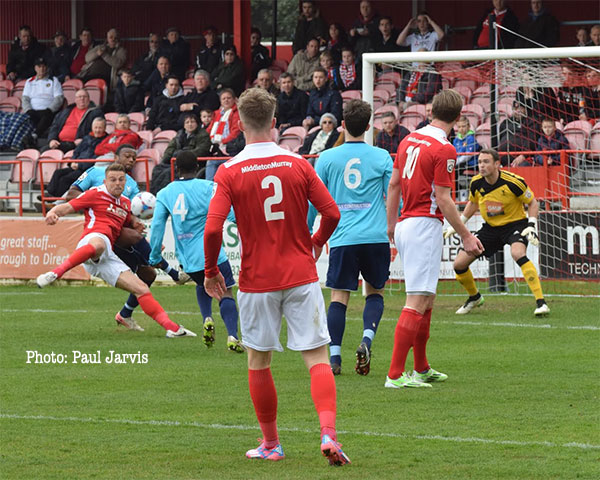 That settled Jamie Day’s men down and they began to clamp down on the Whitehawk midfield. Kelvin Langmead wasn’t far off from a corner, his powerful header saved at mid-height by Ross. The goalkeeper was again in action when Fleet attacked at pace and Kedwell turned and fired on target, Ross diverting it into the side netting.

Palmer was then afforded space to run and he showed what Fleet have been missing from his position – attacking flair – as he floated a cross in for Godden to glance just wide of the post.

Back came the Hawks and they finished the half strongly. Robinson and Sergio Torres both had decent efforts before Scott Neilson’s high cross bounced off the top of the crossbar and Sam Deering’s set piece hit the upright and flew to the far side of the post.

Where Deering had been imperious for the Hawks in midfield in the first half, Fleet really got to grips with him in the second half and they started on the front foot, former player Osei Sankofa clearing out of the six-yard box as Adam Cunnington prepared to pounce. Sankofa went off with an injury moments later and Fleet took the opportunity handed to them on a plate on 54 minutes to go two goals up.

Kujabi failed to deal with a cross in from Rooney and as goalkeeper Ross tried to clear the danger, Godden pounced to poach his and Fleet’s second goal.

That seemed to knock the stuffing out of the Hawks and Fleet seemed content to wrestle control of the game and see out time. The visitors weren’t without their chances, however, and Godden headed Danny Mills’ lob off the line before the two-goal hero almost turned villain with a back pass that required a superb Tom Bonner tackle to deny Mills.

Michael West’s appearance 13 minutes from time drew a great cheer from the home crowd but they were brought to their feet in time added on when Rooney delivered a ball in and who else but West was perfectly placed to send a header past Ross for 3-0.

It was the perfect way to begin a new month for the Fleet, and an even better way to mark a favourite son’s return to the team, and Jamie Day must hope his squad can build on their best performance in some time.

Ed Miller has been Ebbsfleet United's communications manager and programme editor since 2014 and responsible for the club website since 2007. Contact him on ed.miller@eufc.co.uk
PrevPreviousPut a smile on Fleet physio’s face
NextWealdstone 0-1 FleetNext