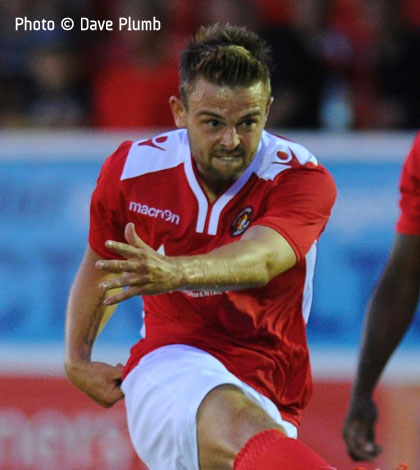 Time off has ‘done us good’ says Fleet boss

Jamie Day believes the Saturday off and the 11-day gap between games will have done his squad a favour, especially as he begins to welcome back a few of the long-term wounded.

“A couple of the injured boys have had training sessions under their belts,” the boss told FleetOnline. “Hopefully the week or so off has worked in our favour. It’s given me more options with players. Against Bromley, we really only had Mark Gower to bring on from the bench, this weekend we have more about us, more possibilities to change a game.”

Matt Godden, Alex Osborn, Anthony Acheampong and Dean Rance (the latter following an injection on his ankle) have all come through full training sessions, while Matt Fish and Sean Shields have used the time to shake off their bugs.

Kenny Clark sits out the game with the first of his three-match bans occurring while Tyrone Marsh’s hamstring has sidelined him. Matt Johnson and Brendan Kieran are also potential doubts.

The Fleet boss has overseen Michael West’s next rehabilitation steps with the midfielder embarking on a course of non-contact training, with full contact training due to begin next week. The prognosis for Aiden Palmer and Charlie Sheringham is less positive, with Sheringham due to have had a scan on his hip this week.

Shields spoke to FleetOnline as part of a matchday programme interview to be published tomorrow, hoping to have fully recovered from his illness which has partly dogged an otherwise impressive start in a Fleet shirt. “It’s been especially frustrating,” he said. “But it happened and I just have to deal with it. I’m really looking forward to our run-in and every game now is so important. We haven’t done as well as we would have liked but we are a talented squad and we must finish really strongly now.”

The big danger man for the Tudors is skipper Jordan Parkes, who has 16 goals from midfield this season and is one of those players who likes to strike from distance. “They are a good side,” Fleet assistant manager Barry Ashby said. “The boy Parkes is an obvious danger. We’ve watched them and they are a genuinely solid unit with some flair who like to get the ball forward.”

Like Fleet’s, the Hemel squad has undergone significant changes since October and there could be as many as nine changes from the line-up in our first meeting. Striker and ex-Fleet loanee Dennis Oli has been fighting fit of late and manager Dean Brennan has added the likes of Dominic Hyam (Reading), Matty Harriott (Hayes & Yeading), Zane Banton (Luton), Mo Shariff (Bradford City), the Southern League Premier’s top scorer Nicke Kabamba (Burnham), Ryan Newman (Merthyr) and Arthur Lee (St Neots Town) to his squad.

It seems to have paid off with the Tudors, third from bottom when last we met, now one place, one point and one game better off than ourselves going into tomorrow. With only one defeat in their last six games, and wins on the road at Bromley and Basingstoke this season, Hemel Hempstead will have their eyes on the top five as much as the Fleet and their late surge for the play-offs will need to be checked tomorrow if Fleet are to stand any chance of their own progression.

This week, the Tudors have added goalkeeper Jamie Head to their squad from Cambridge City, but regular No.1 Laurie Walker should be fit enough to play, while one-time Boreham Wood and Luton full back Jordan Brown has also been drafted in.

Ed Miller has been Ebbsfleet United's communications manager and programme editor since 2014 and responsible for the club website since 2007. Contact him on ed.miller@eufc.co.uk
PrevPreviousPreston prepares for 200th game
NextFinal sale in club shopNext