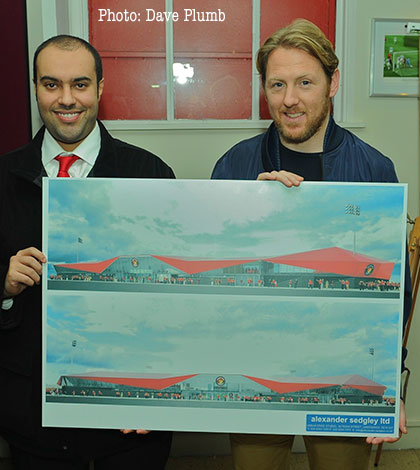 An excellent turnout of more than 375 people packed the Fleet Social Club on Monday night to view plans for the future home of Ebbsfleet United. The reaction amongst supporters was overwhelmingly upbeat and positive as they reacted to the plans and the words of Fleet owner and chairman Dr Abdulla Al-Humaidi. He had made a special visit for the occasion and happily answered all queries from both fans and the assembled media, with manager Jamie Day alongside him.

Fleet Trust chairman Chris Pilkinton made a speech (pictured below) to thank Dr Abdulla for bringing the club back from the brink of extinction which was received warmly and with a standing ovation from the assembled supporters and, to put the icing on the cake, the Trust funded a free bar for the duration of the event!

Dr Abdulla told FleetOnline, “This is a fantastic show of support and the fans have made a great effort to come and see our plans. This is a vital part of taking the club forward and you can see from the facilities we are building in that the intention is to make it self-sustaining with revenue generation a central part of the project. It’s very exciting for us and I hope very exciting for the fans too.

“People here seem to like the design and it is important for the area that we are helping drive the regeneration with such an eye-catching main stand and entrance. Hopefully we can start work on the first phase as soon as possible and then get the work on the other three sides completed very soon.”

Jamie Day said, “It’s massive for the club. You only have to look round tonight at the people here and the mood and you can tell everyone’s behind it. It’s really helped to sell the club and to convince players in our signing negotiations recently when they can see the bigger picture and what we’re all working towards. The chairman’s been fantastic about the whole thing and obviously we need to deliver on the pitch too.

And, given the often cramped confines at the PHB Stadium’s current main stand, has the Fleet boss been able to reserve an office or extra space for the management team in the new design? “I’ve not had too much input about things like that just yet, but maybe further down the line I can say where the dugouts will go!” 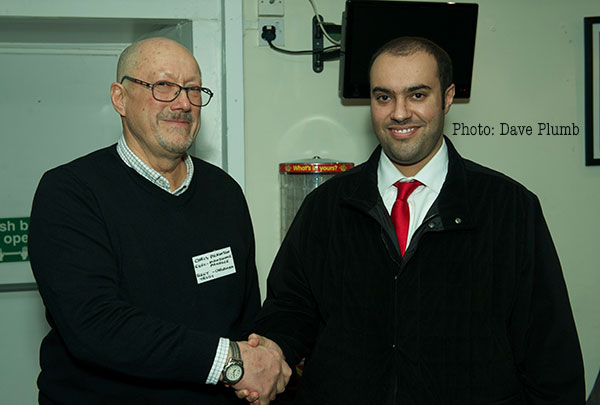 Fleet general manager Dave Archer collected survey sheets filled in by fans attending the event and will analyse the feedback from those over the coming days, though on first glance he was delighted that they too showed strong support for the development among supporters. “We have ambitious targets. The fans want success and they’ll support the club through. They’ve been just fantastic.”

Halfway Liners Steve Jones, James Charlton, Robin Farr and Andrew Charlton – who will be among the first supporters to have to find a new spot from where to watch their team when the Liam Daish Stand is redeveloped – were also delighted with the plans, as they told BBC Radio Kent:

“I think they’re fantastic,” they said. “For a club like ours to have something like this happen after all this time is just brilliant. We’ve got a great future ahead of us. The stadium plans are amazing. The work that has gone into them is just beyond expectations. I didn’t know what to expect, something more boxy, but this creates a ‘wow!’ when you see it. It’s not your typical box-design football ground replacement for what’s gone before. Someone’s really thought about this and I think the design is really something to behold.”

BBC Radio Kent commentator Charles Webster, a long-standing supporter, also spoke of his delight: “Eighteen months ago we thought it was all over. I was here taking pictures, thinking it would all be flats and houses one day. Everybody was pretty much resigned about the club going to the wall… I’ve been in so many meetings in this Fleet Social Club down the years when it’s all been doom and gloom. Well for a change the Fleet fans have got something to cheer about.” 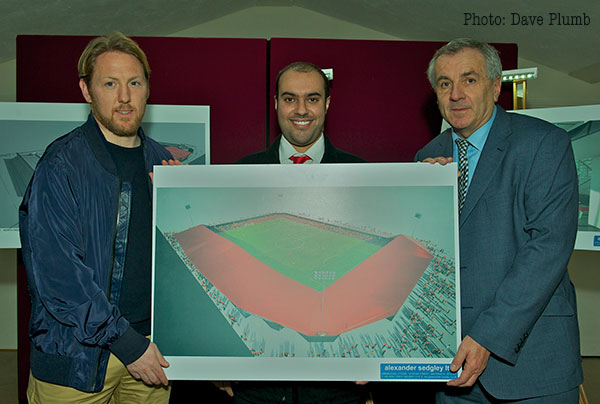 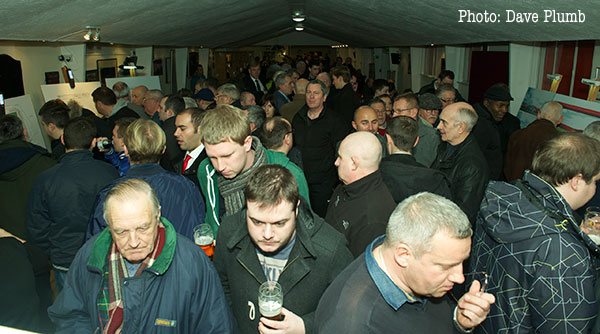 Ed Miller has been Ebbsfleet United's communications manager and programme editor since 2014 and responsible for the club website since 2007. Contact him on ed.miller@eufc.co.uk
PrevPreviousFleet deliver stadium lowdown
NextCouncil leader backs Fleet proposalsNext