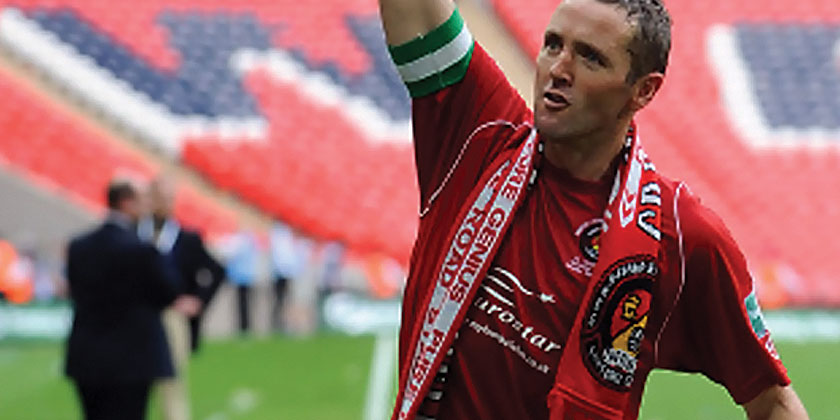 Spurs do the honours as Fleet fans pay tribute to skipper

Ebbsfleet United take on what is likely to be the bulk of Tottenham Hotspur’s U23 squad this Saturday in a friendly being billed as the Paul McCarthy Memorial Match.

In memory of our former Trophy-winning skipper and assistant manager, who died in February aged just 45, Fleet fans are being urged to turn up to support the McCarthy family – even if pre-season friendlies aren’t necessarily their bag. The club is donating all proceeds from the match to Paul’s family to use as they see fit.

Vice chairman Peter Varney told Charles Webster (listen below) that, “I watched the team a few times at that time and [Paul] was an inspirational captain. I went to the Trophy final, he was such a key player for the club and our thought around this fixture was that we wanted to do something, that if there were any issues for the family at all, in whatever way we could help… that’s why we’ve said all of the proceeds from this game will go to the family.”

A 48-page programme with additional tributes to Paul, following on from our tribute programme back in March, will also be on sale priced at £3. Please do come along and support this fundraising effort and show your appreciation of a wonderful servant to this club if at all possible

On the pitch, Daryl McMahon is looking forward to the test his players will face and has warned that the Spurs squad will not be just another team of young hopefuls. “On Saturday you will be watching without a doubt some future Premier League players,” McMahon told FleetOnline… and he would certainly know a thing or two about that, having trained many of them himself from his time as a youth coach at Tottenham.

“I know the U23 manager Wayne Burnett well from my time with him at Dagenham,” McMahon added. “His assistant, Justin Cochrane, is one of my best friends and one of the best young coaches around and these Spurs players will be of a very high standard. Some of them have already cut their teeth at League One and Championship level and it will be a very good test for our players.”

Amongst the Spurs line-up could be a World Cup winner in Kyle Walker-Peters, who was part of the England squad that won the FIFA U20 tournament this summer. Other squad members, many of whom played in the U23 Premier League 2 last season, include former Fleet junior and local lad Ryan Loft as well as Will Miller who turned out for Burton Albion in the Championship. Shilow Tracey, of course, whose sale to Spurs from Ebbsfleet set this fixture up, will also travel with the visitors. Many of the Spurs squad have all been capped at various youth levels on the international scene, so a very competitive match is expected.

Other than McMahon’s links to Spurs, Fleet have two former Tottenham youngsters in their ranks, with Jonathan Miles and Darren McQueen having grown up playing football with many of the visiting players. In addition, Sean Shields and Jack Connors both played under Spurs U23 manager Burnett at Dagenham.

Gates open at 1pm and the game is pay on the door – no advance ticket purchases are required. There are no seating restrictions in place. Admission costs £10 for adults, £8 for concessions and £5 for juniors – season tickets are not valid. Car parking is available at Ebbsfleet International Car Park C for £3 and please do not park along Thames Way as you are at risk of being ticketed.

The club shop will be open for merchandise sales and Spurs fans may like to note the stock of our Set In Concrete history of Northfleet United, which contains plenty of information and photographs of former Tottenham greats in their time at Stonebridge Road during the 1920s and 1930s.

Listen to Peter Varney about the memorial game, below…

Ed Miller has been Ebbsfleet United's communications manager and programme editor since 2014 and responsible for the club website since 2007. Contact him on ed.miller@eufc.co.uk
PrevPreviousDerek Styles RIP
NextHalf-season tickets to go on saleNext