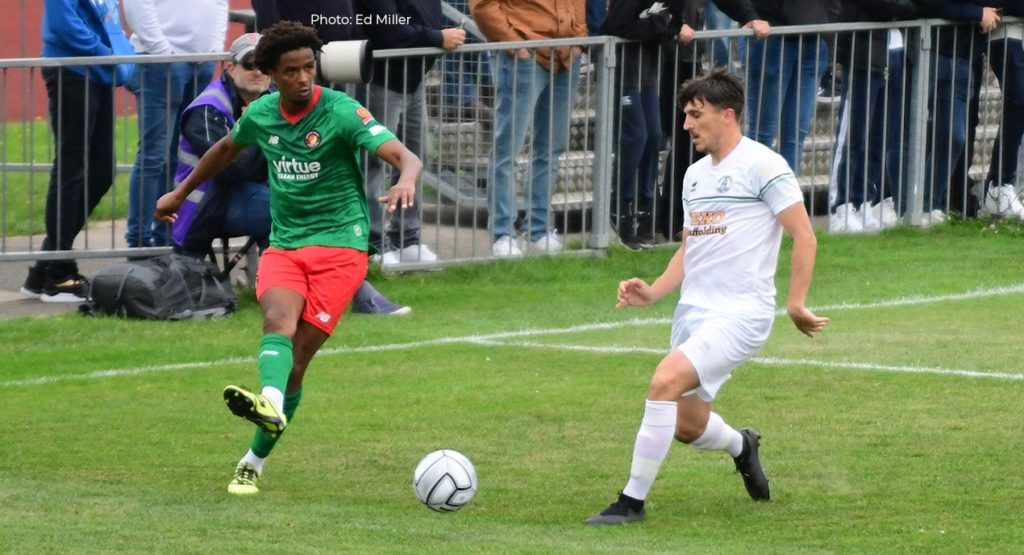 Chelmsford City visit the Kuflink Stadium for the first time since our last promotion final as the only remaining barrier in Fleet’s way in what is left of the regular season programme.

Regardless of Saturday’s result, of course, City cannot block Fleet’s path into the play-offs but they can hamper the chase for a final position of third and attempt to exchange a home semi-final next Sunday for a home eliminator on Thursday instead.

It’s an exciting prospect for the final day of 2021/22 – our 75th season – and perhaps fitting that our opponents as we head to the end of our milestone campaign were also one of our first visitors on home soil back in 1946.

Having seen Alfie Egan return last Monday at Billericay, Dennis Kutrieb was hopeful of Greg Cundle playing some part in this one, while the Fleet boss also restored Will Wood and Lee Martin to starting duties, the skipper repaying that with the equaliser at New Lodge.

“My selections now are happy problems,” said the manager. “Because if I have selection problems then we are in a good position and I’m happy to have the problems. On Monday, you could see Lee Martin hasn’t started in a long long time, he put a great shift. Will Wood I haven’t started in a long time and he put a great shift in and Alfie Egan went as long as he could. Finney had a slight knock, Sido and Solly we protected them not to play and Joe Martin went off injured, so you need to manage it in this part of the season, especially with the play-offs coming up.

“We’re back third, we just need to look after ourselves now and that’s what I’ve said all along. We have our goals in the play-offs but first and foremost we have to work hard against Chelmsford.”

The big question is whether it will be a full-bodied Clarets that come out free to express themselves against the Fleet or a team with nothing to play for before heading into the close season. Monday matchwinner Craig Tanner believes this is where Fleet can’t slip up. “They’re probably the hardest teams,” he said, “because you don’t really know what they’re going to do. Are they going to down tools or are they going to think ‘alright, let’s just go for it this one game and have some fun’ and do whatever they want to do. But as long as we do what we do and we keep it tight at the back, we know with the strike force we’ve got there’s always going to be goals for us.”

Goals was the only thing lacking the last time the two sides met way back at the beginning of the season, when Chelmsford saved a penalty to protect a 0-0 draw and a point. City boss Robbie Simpson said of that one, “Ebbsfleet were the best team I’ve seen at this level and the best display of football and I said whoever finishes above them will win the league. But I wasn’t happy with the account we gave at Maidstone last week so I’m hoping for us to show more against Ebbsfleet, have some confidence and go and have some fun. It’s the last time this group of players will play together so I want them to come off the pitch and show real team spirit.”

It’s been a dogged campaign for Chelmsford, usually amongst the play-off places themselves but this season holding some real relegation fears for a time. Former Fleet striker Charlie Sheringham will likely spearhead the Clarets’ attack and although our one-time skipper Dave Winfield is back from injury, he didn’t make the City squad in their 1-1 draw with Concord on Tuesday.

Shoring up the back line for Chelmsford is the highly rated Ade Oluwu and despite their lowly position, the visitors don’t concede many goals – indeed they have a better defensive record than eight sides in the top half of the table. There’s experience in the side, with Chez Isaac in midfield and ex-Gillingham striker and Canadian international Simeon Jackson up front, while alongside him is Southend loanee Matt Rush who has already scored here at the Kuflink Stadium for his parent club in pre-season.

Danny Imray and Dara Dada are another two to keep an eye on in the Chelmsford side but as Dennis Kutrieb says, “We just need to look after ourselves!”

We will once again have post-match live music for you from 5-7pm after the game… all supporters are welcome to join us after the final whistle for this free live entertainment and, from 4.45pm, the bar and music is open to everyone, not just match attendees.

Ed Miller has been Ebbsfleet United's communications manager and programme editor since 2014 and responsible for the club website since 2007. Contact him on ed.miller@eufc.co.uk
PrevPreviousTanner tots up more stats
NextSeason-ticket extravaganza at EbbsfleetNext