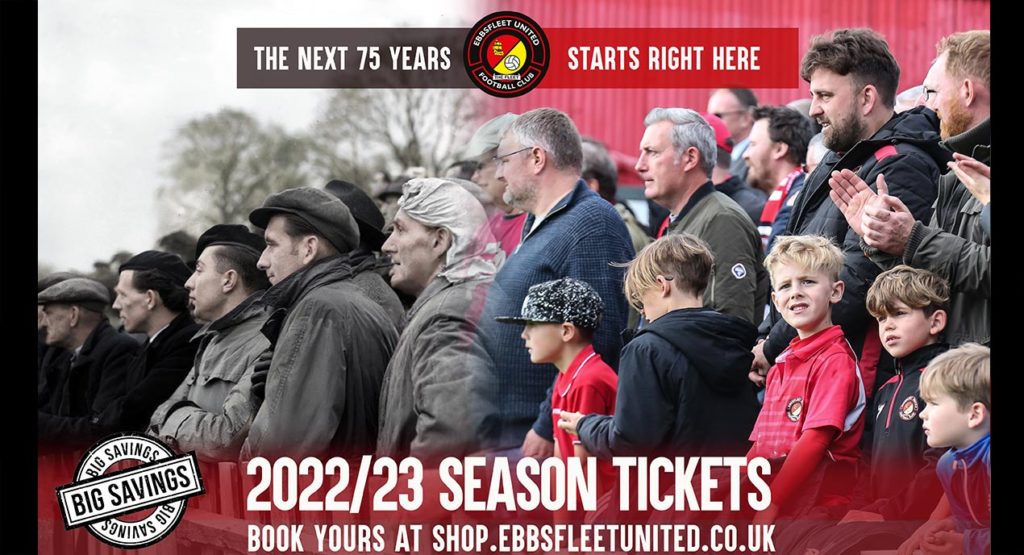 Ebbsfleet United are pleased to announce our season-ticket prices for the 2022/23 campaign – and they apply whatever division we are playing in next season.

And to make our great-value tickets even more affordable for Fleet supporters, we are opening an earlybird window from May 8th to 31st to make further savings.

Following the season-ticket rollover into 2021/22 along with the well-received special anniversary prices for this season, the club is seeking to retain and expand our valued season-ticket-holder fanbase and with careful consideration of this, our new prices remain lower than at any time from 2017–21.

Add in the fact that next season we will play 23 home league matches rather than 20 as has been the case this year, then the savings you make on a season ticket multiply further! Indeed an earlybird concession season ticket this year will cost no more than it did under our special anniversary offer… and you get three more games into the bargain!

An adult earlybird season ticket will save you a massive 45% on potential National League matchday costs, while a concession saving rises to 49% and juniors an even more eye-catching 65%!

Prices this season are as below. Season tickets will go on sale online from Sunday May 8th and will be available to order at the club (at reception) from Monday. There is no need to bring in your existing cards as we will be implementing a new method of entry over the summer and will issue new cards/passes before the 2022/23 campaign kicks off.

We are also introducing a new family season ticket for £600 at the early-bird rate which entitles two adults and two U18s to attend every home league game of the season – that’s a saving of up to £110 on the cost of separate season tickets and a huge 53% off the regular potential National League matchday price.

We will be reintroducing our popular Junior Fleet membership for U12s (more details to follow) which will include a season ticket, birthday card, a Christmas party and more!

And finally, Lounge Hospitality Membership including season ticket has been reduced to £400+VAT. Lounge members can enjoy the meal option in addition at a rate of £20 per game but for even greater savings on that, why not add a meal at every home league game by taking up the full season offering at £745+VAT.

Matchday admission in National League South will remain the same price at £15 (adults), £12 (concessions), £7 (youths) and £1 for U12s accompanied by an adult.

Ed Miller has been Ebbsfleet United's communications manager and programme editor since 2014 and responsible for the club website since 2007. Contact him on ed.miller@eufc.co.uk
PrevPreviousPreview: Fleet’s season extends beyond City limits
NextFleet 2-1 Chelmsford CityNext