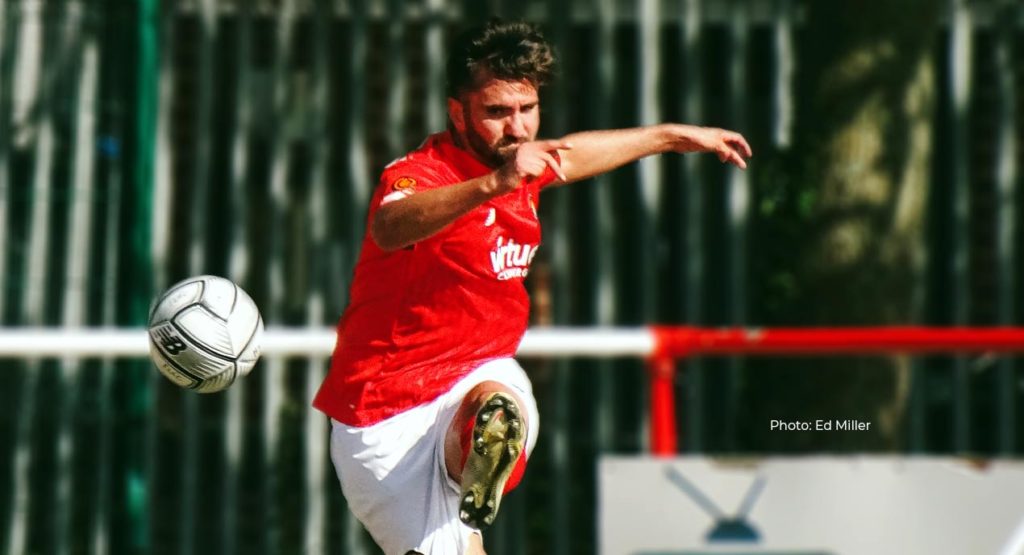 A trip to Chippenham isn’t without incident for the Fleet – last season’s 2-1 victory in Wiltshire came beneath a torrential downpour and already this season, it hasn’t been a straightforward affair. The original match was called off because of a Covid case in the home camp and the rescheduled game this midweek takes place against a backdrop of a fuel crisis across the country.

Petrol predicaments aside, Dennis Kutrieb’s side are once again raring to go in the League, with two games in hand over most other clubs in the division. It’s been more than two weeks since the Fleet’s last outing in league competition with fans and players alike left to kick their heels this Saturday due to the odd number of teams in the division requiring one club to sit things out each weekend.

The players kept in shape with a 90-minute session against the Academy on Thursday plus training at the weekend, with Alex Finney and Kieran Monlouis completing 90 minutes and Will Wood getting 45 under his belt. Add to that the return of Kreshnic Krasniqi at Carshalton in the FA Cup, plus Chris Solly back from suspension, and Kutrieb’s selection choices have widened.

Having never played Chippenham until last season, the two clubs went head-to-head three times within a couple of months as two cup ties went to penalties and Fleet came from behind to win in the league at Hardenhuish Park.

Jake Goodman was the goalscoring hero that day but he’s one of four Fleet players from that game who have now moved on. For Chippenham, too, their squad has undergone a change. Their goalscorer Bradley Ash has departed for Weymouth and they will be without other leavers including goalkeeper Will Puddy, midfielder Eddie Jones and ex-Torquay frontman Chris Zebroski.

The Bluebirds’ new signings – a few added since the two clubs were originally scheduled to meet in August – include goalkeeper Will Henry (Bath City); midfielders Harvey Bunker (Forest Green, loan), Daniel Griffiths (Cardiff City) and Alefe Santos (Weymouth); plus striker Harry Warwick (Cardiff Metropolitan University). Originally the club had only seven fit players to start the season either side of their Covid issues so it’s testament to the recruitment since that they sit in fourth place.

An excellent win at fellow high-flyers Concord Rangers by 3-0 on Saturday sets the Bluebirds up to take on the Fleet – although Mike Cook’s side lost their unbeaten home record two weeks ago to Chelmsford and needed a reply to overcome lower-league Poole Town in the Emirates FA Cup.

That loss to Chelmsford is Chippenham’s only defeat of what so far has been a campaign that has defied the odds and naysayers, with a 1-0 win over Havant & Waterlooville at home a particularly good result. Former Oxford City and Newport County forward Marlon Jackson is current top scorer with three goals, while midfielder Will Richards has also pitched in with a couple.

Advance match tickets are being sold by Chippenham online via their website here.

After Tuesday’s game, Fleet travel to Aylesbury United in the Third Qualifying Round of the Emirates FA Cup.

Ed Miller has been Ebbsfleet United's communications manager and programme editor since 2014 and responsible for the club website since 2007. Contact him on ed.miller@eufc.co.uk
PrevPreviousBook your match sponsorships for 2021
NextChippenham Town 2-5 FleetNext