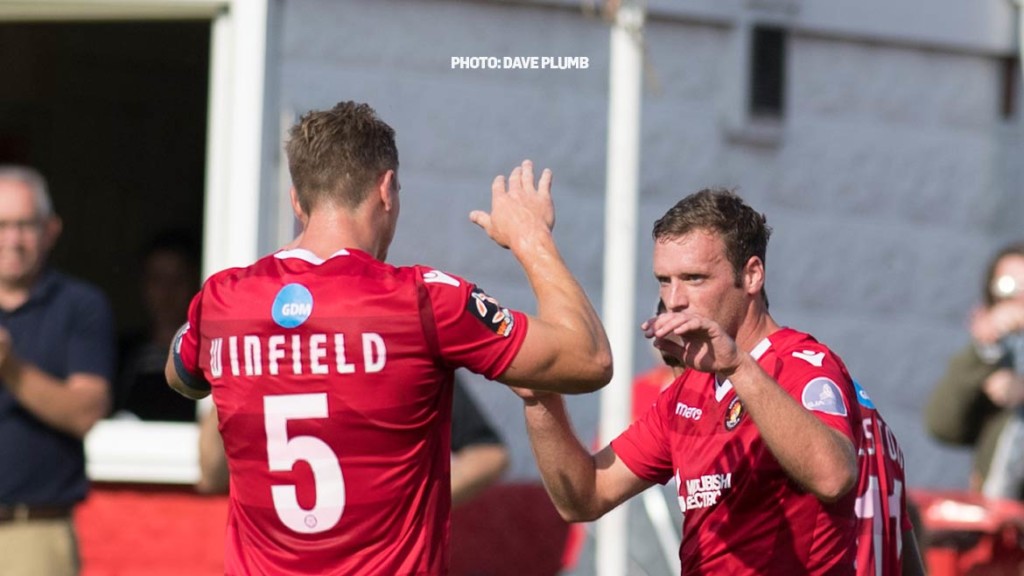 Festive football begins at the Kuflink Stadium on Boxing Day as Braintree Town make their first visit in a league fixture for six years. The match kicks off at 3pm.

It’s the first of two games against the Iron inside a week, the only team that Fleet have yet to play this season, with a home game against Eastleigh sandwiched in between on Saturday 29th. The Fleet will be hoping to repeat last year’s Boxing Day success when goals by Jack Powell and Danny Kedwell earned a 2-1 win over Bromley.

Myles Weston missed out last Saturday as his wife was expecting a baby but with Dave Winfield having returned to action sooner than many were expecting in last Saturday’s defeat at AFC Fylde, Garry Hill should have his full complement of 18 players to call upon. That defeat ended an eight-match unbeaten spell but the manager will now be targeting points from a busy run of games until the Fleet take a week off on the weekend of 12th January due to their exit from the FA Trophy.

Braintree, who succeeded the Fleet as winners of the National South play-offs, may be sitting rock-bottom of the division currently but they have proven to be a tough nut to crack on occasion, not least a 2-2 draw at Salford City that they were unfortunate not to win. They have also gained a draw with Sutton United and beaten both Bromley and Dover in a campaign that took them 11 games to register their first win.

With a new manager in place in Hakan Hayrettin, who previously managed the club at this level when he succeeded Jamie Day in 2016, the visitors have had a considerable turnover of players and the side likely to take the field against the Fleet on Boxing Day contains few of those who started the season for Braintree back in August.

One player who definitely won’t feature is Norman Wabo who has returned to Southend United from his loan spell just this week, while goalkeeper George Legg – who replaced Nathan Ashmore at Gosport Borough – has also returned to his parent club, Reading. Braintree have veteran Ashlee Jones capable of stepping into the breach and England C stopper Ben Killip made his return on Saturday, having been out since October with an ankle injury.

As a result of all their personnel changes, loans and several injuries, Braintree currently boast a fairly large squad. New signings including young full-back Oscar Borg from Aston Villa, ex-Macclesfield midfielder Courtney Richards, West Brom loanee Callum Morton, Cameron James on a second loan spell from Colchester, Ejiro Okosieme from Dover and Taylor Curran, on loan from Southend. But the Iron have suffered up front where they’ve lost Mo Bettamer to Barnet and Reece Grant to Aldershot, while Jake Cass is injured. They’ll rely on ex-Barnet striker Justin Amaluzor and one-time Margate forward, the Guyanan international Marcel Barrington for goals.

Braintree have enjoyed two of their three victories this season on the road, but haven’t won in seven games – that last win did come in Kent, however, so Fleet will need to be mindful they don’t give the visitors another reason to celebrate a trip back through the Tunnel.

• Car-parking at Ebbsfleet International Car Park C is free for this match. Parking on Thames Way or around industrial estates runs the risk of vehicles being ticketed so we would advise taking up the generous offer of free parking at the station this Boxing Day.

Ed Miller has been Ebbsfleet United's communications manager and programme editor since 2014 and responsible for the club website since 2007. Contact him on ed.miller@eufc.co.uk
PrevPreviousChristmas: office opening hours
NextBoxing Day sale on now at the Fleet!Next