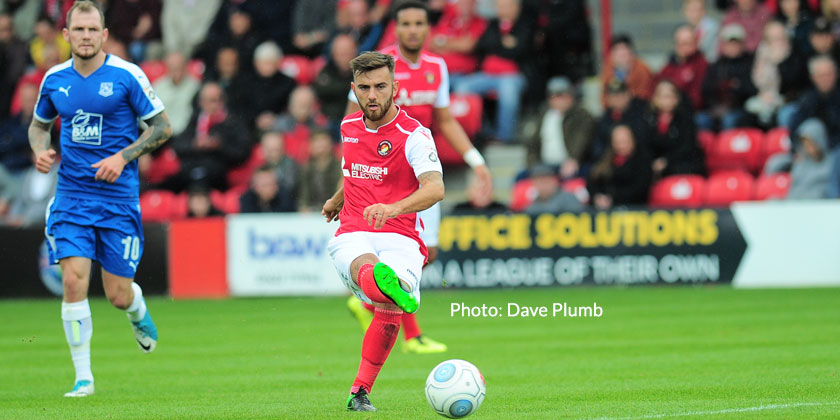 Pleasure and Payne for Fleet boss

Form side FC Halifax Town travel to Stonebridge Road this weekend looking to improve on their record of one win in six at the Fleet’s home ground, while Daryl McMahon will be eyeing another three points for his side ahead of two consecutive away trips.

The Fleet boss had good and bad news on the injury front in midweek with Dave Winfield’s return now much closer than originally anticipated but he has lost Jack Payne to a knee injury.

Payne could face anything up to six weeks on the sidelines after he was advised by specialists to rest a troublesome knee complaint. “Jack’s had a knee injury since the second game of the season,” McMahon told FleetOnline. “It’s been niggling away at him and he normally has Monday off, rests it then, and he’s normally OK to carry on. But it flared up a little bit more lately so it needs complete rest now for a period of time. The surgeon has said ‘up to’ six weeks; it might be two or three, but six is a possible timeframe. But we’ve got Dean Rance back who has been excellent and can do a job in there, so giving Jack’s knee a proper rest is where we’re at with that.”

The manager was happier with the news that his skipper will not require surgery and is hopeful Winfield will come through his recovery programme. “Dave’s the best news we could have had,” McMahon said. “But he still has to go through a four-week period of building up to proper training. If we get through these four weeks with no setbacks, then he can get out on to the grass and do some outside work, which will be another two to four weeks. It’s the best news though because if it went the other way, he’d have been out for the season.”

Sean Shields has been back in training since Tuesday, however, so aside from Payne, Winfield and Bradley Bubb, the Fleet boss otherwise has a full complement to choose from.

The Shaymen come to Stonebridge Road for the first time since their reformation as ‘FC Halifax Town’ and, having arrived in this division via the same play-off method and on the same day as ourselves, have got over a winless start to sit in fourth place. That has come about via four wins in five games and only one defeat in eight. Manager Billy Heath, the former FA Trophy-winning North Ferriby manager, has recruited seven players from his former side, with five of them having appeared against the Fleet in that 2015 quarter-final.

They include Liam King, the penalty scorer, and Tom Denton – the man who won the penalty that knocked the Fleet out. He stands 6ft 7in and with five goals this season, will be a handful in the air for the Fleet defence. “They’re a big side,” said McMahon. “The goalkeeper is 6ft 7 as well. Denton had had a good start to the season and he’s a big player for them and not just in height! The wide lad [Matty Kosylo] has really been on form from the games and highlights we’ve watched, he’s a real prospect and a key player for them. They’ve had some great results v Orient, last week against Bromley with 10 men for most of the game. We know they’re tough… and it’s probably boring me saying again that there are no bankable three-pointers at this level. But with two clean sheets on the bounce, we need to build on that and get the result we know we’re capable of.”

Halifax might be a little light in defence with Simon Garner serving a suspension after his red card last week. Former Wrexham centre-back Martin Riley could miss out as well, while Michael Duckworth remains sidelined with a hamstring complaint. However, skipper Matty Brown is a solid and experienced player at this level and has grabbed a couple of goals as well this season, so manager Heath is confident his side will be able to maintain their recent good form whoever comes into the back line. “Ebbsfleet haven’t lost many games at all which shows they are competitive,” Heath told the Halifax Courier. “There’s not a massive amount between the teams in this league. You can win a game as easily as you can lose it. If you get anything away from home in this league it’s a good result.”

Saturday’s match is not segregated. All supporters are requested to use Ebbsfleet International Car Park C, costing £3. Ebbsfleet Business Park now has gates across the entrance so parking there is no longer possible.

Ed Miller has been Ebbsfleet United's communications manager and programme editor since 2014 and responsible for the club website since 2007. Contact him on ed.miller@eufc.co.uk
PrevPreviousEngland C call-up for Fleet pair
NextFleet 2-0 FC Halifax TownNext